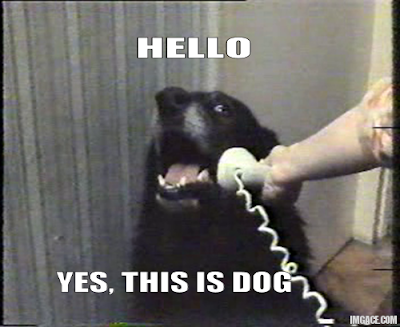 This is my favourite meme of 2011. Every time I look at it, I get a smile. It's a combination of the dog's ridiculous facial expression and the fact that the response is a confirmation that he or she is indeed "dog". Not a dog. Not the dog. Just dog. Extremely funny.

In other year end roundups, I've detailed movies that I saw, or television that I saw, or video games that I played. I'm going to quickly get those out of the way, so here we go.

Okay, now on to some other things, such as resolutions. New Year's resolutions are often recipes for failure. The new year is an arbitrary date and often leads to failure due to winter, time, and the exhaustion of the holidays. However, I managed to turn my life around on a purely arbritary day, with no lead up. Just one day, in February, I did it.

This year, I am setting a few resolutions, despite what I just said about the possibility of failure. Number one is to continue working out and eating right. I'd like to lose another ten to fifteen pounds to be honest. I can do it. A corollary of this is that I'd like make sure that this becomes my lifestyle permanently. No more candy, no more junk food. I've been fairly recalcitrant in regards to quitting candy these past few months, and part of this is due to living with my parents, but it's mostly my fault.

My second resolution is to work hard at school. I did the bare minimum last semester. I don't think I did any damage, but I could have done better. This term, I want to excel and not leave everything to the last minute. I just want to do well, make connections and use them in the next year, my last undergrad year.

Thirdly, I would like to sort out my personal life. I don't want to be single anymore, but I also abhor the idea of being in a relationship. I can't imagine having to go through what I went through in 2010. It was awful. Even receiving a text from my ex fills me with loathing. But despite the bad memories and emotions, I still long for a new relationship. Falling in love is actually quite fun. I also don't want a quick fuck or a FWB situation. I don't know what I want and in 2012, I resolve to figure out what I want.

Fourth, sell the physical books that I don't plan on keeping forever. I purchased too many books since I moved in with my parents. It's not good. A corollary to this is that I need to stop buying books. That shouldn't be a problem thanks to my Kobo.

That's 2012 in a nutshell. I think that my resolutions aren't difficult to achieve. In fact, they should be things that I simply do, rather than go to the effort of typing them out as a resolution. Hopefully I can sustain the awesomeness of 2011 into 2012. To be perfectly honest, 2012 is off to a great start. I had a wonderful New Year's Eve hanging out with a super cute girl and last night I had a bit of an informal date with her. So fingers crossed.
Posted by matthew.