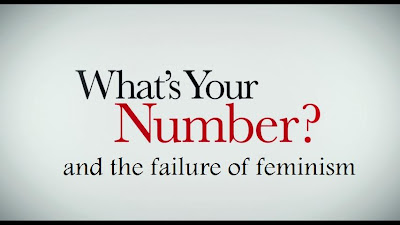 "There's even a whole article in Marie Claire about it..." says Anna Faris in this romantic comedy. In the same scene, a female friend tells Faris that a study at Harvard found that once a female has had more than 20 sexual partners, she will likely never marry. These two sentences that I have typed out say more about contemporary society than I have ever typed before. Instead of a review of the film, I am going to work out some of the things implied in these two sentences.

In its awkward and unfunny way, What's Your Number? is working out a particular type of tension within society. This tension? The emergence of the sexually liberated and promiscuous young female professional, a single lady, living on her own, having casual sex. How do I know this is a tension? If you reversed the genders of this film, it wouldn't even exist. We are still having problems with the double standard that permeates our society, that a woman who has sex freely is a slut whereas a man who has sex freely is a stud. Ignorant Social Darwinists argue that men are biologically determined to spread their seed as best as possible whereas women are designed to stay with one partner in order to maintain the paternity of the child. This is ridiculous and tends to ignore all the complex facets of psychology that drive us.

In Nina Power's book, One Dimensional Woman, which I have been pointing to a lot on this blog recently, she points to the postcapitalist system's tendency to ruthlessly colonize markets in order to create further profit. Specifically, the market has colonized the concept of feminism, turning it into something to be exploited. In a previous post, I pointed to the idea that advertising is asking women to buy into a sisterhood of inclusion that respects all body shapes and types. By purchasing this product, the consumer is literally buying into feminism. The consumer can feel good about themselves by consoling themselves that the product feeds into positive aspects of feminism. You are a feminist by purchasing this sex toy, this candle, this whatever.

The specific market that is being colonized is the young single urban professional female. In What's Your Number, Anna Faris' character is young, single, working for a corporate system (and denying her artistic individual dreams) and lives alone in a giant apartment in what appears to be either Chicago or Boston. She is the perfect demographic for this particular market. The emergence of the young working female is not specifically new. The typist or the secretary of the 50s and 60s is a good example of this. The appearance of this particular single female in the previously male dominated workforce heralded a slight shift in the sexual dynamics of the workplace. The same is happening now, but concurrently with the acceleration of the colonization of the marketplace specific to feminism.

Young single women are having sex. It's a fact. I wish I had the stats to back up this claim, but I think we can totally agree that the rise of the hookup culture, the decrease in marriage, the relaxing of particular social/sexual taboos and the overall improvement in wealth has led to a culture in which single people of both sexes are engaging in sexual relationships that do not extend to a marriage. Of course, there exists a long term committed relationship without the marriage, but the very definition of this term is nebulous and highly subjective.

If we agree that single people are having sex, then we must agree that young women are having sex (as it takes partners of both sexes to have heterosexual intercourse). If this is true, then why do I think that we are uncomfortable with it? Again, I put to readers that if the genders were reversed in this film, the audience reaction would be entirely different. In fact, the film wouldn't exist.

Chris Evans plays the romantic lead in this film. He helps Anna Faris track down her exes so that she might possibly try again with them, in an attempt not to increase her number. They spend most of the movie together, he does cute things for her, they have a lot of fun, and inevitably, they fall in love. He demonstrates his opinion of her by changing a fundamental part of his behaviour which symbolizes value in the protagonist's perception of him. This is a cynical reading of a common trope in romantic comedies, but it's interesting nonetheless in respect to my previous paragraph.

Evans' character is a classic lothario, bedding different women nightly, but is unable to make any emotional connection with them beyond the physical. He attempts to sleep with Faris' character multiple times. At first, in the context of simple conquest. Later, in the natural progression of their relationship. His worth in the film grows as he stops mindlessly sleeping with women and becomes more of a friend. At the beginning of the film, his worth is only pragmatic; he helps find the exes. His worth increases as Faris comes to see that her exes are crazy and that Evans is the only man who understands her. This comes around when he demonstrates that he engages with her highly specific and highly individual method of artistic expression. By appreciating her quirkiness, he has shown he is unlike the other men. Again, this is common in the language of romantic comedies. I'm not pointing out anything revelatory.

But, What's Your Number is working through this classic themes of love and marriage in the context of relationship-less sex. Instead of simply being Faris choosing one guy over another, she is attempting to fight back against her own history, her own sexual history. It is entirely okay if Evans beds different women every night, but it is abnormal if Faris does - and in fact, detrimental to Faris' odds of marriage if she continues.

Therefore, the film is positioning marriage as an end goal, something to be attained and acquired as if it were any other product to be purchased off the shelf. What's Your Number plays into the language of romantic comedies by positioning the marriage as goal rather than simply a product of romantic relationship (or as social construct, but that's another post).

Faris' character has her own apartment, her own life, her own friends, her own career, her own art, but she must work through her own past as a person in relation to a man in order to find comfort in the future. The film is saying to its audience that women should have a particular quantity of fun before doing the right thing and settling down into marriage. The wild portion of the past is to be set aside as one grows into adulthood.

But she's already an adult! She has an adult job and an adult apartment. So what's the issue? That's the inherent problem with the film, or rather, that's the problem that the film is trying to work out. The film sees a problem with the idea that the young urban single professional female (YUSPF) has a desire to be sexually active beyond what is socially acceptable, as symbolized by both Marie Claire and a hazy reference to a study done by Harvard. Of course, it's ludicrous to imagine that there exists a sexual partner limit, or that a woman having more than twenty previous partners is not marriage material. All of these things are patently ridiculous. That doesn't stop What's Your Number from seeing a problem there. The film is merely articulating an unconscious anxiety in contemporary society that these YUSPFs are having sex and that society should somehow adjust to this idea.

It's easy for me to say that women should own their sexual histories and not feel self-conscious about the numbers. It's easy for me to say that feminism has succeeded to a point where YUSPFs can have this casual sex without ruining their careers or their social currency. The reality is that there exists a disparity in how women are treated in terms of their sexual histories. The idiotic and frustrating double standard of "stud" vs "slut" will exist for a long time. But, what I can point to is that What's Your Number isn't helping things. No matter what number the film had arbitrarily selected as the limit for sexual partners, the very idea of effecting a limit in partners represents the very failure of feminism to combat movies such as What's Your Number.

I'm willing to bet that Hollywood thinks it's being feminist in releasing a film in which a female has casual sex. I'm also willing to bet that if Hollywood wanted to be more aggressively feminist, the end result would have been a film in which Anna Faris actualizes her feminism by the purchase of products that accentuate her femininity such as shoes or dildos or clothes. There's something inherently disturbing that Hollywood cannot produce a film that portrays a YUSPF engaging in modern everyday life without making a big to-do about the sexual politics therein. A movie about a man who has sex with multiple women and learns a lesson is a film without a plot or a "message". A movie about a woman who has sex with multiple men is a movie with a specific intended "message" otherwise known as a message movie. That disparity infuriates me.
Posted by matthew.