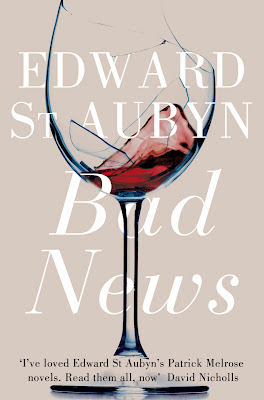 Patrick's father has died in New York City, so Patrick hops on a plane to pick up his father's remains. He is twenty two and proud owner of a fairly nasty heroin addiction, among other addictions. He leaves behind a girlfriend he tortures verbally and a girl he's been sleeping with with whom he has nothing in common. He arrives in NYC and vows to remain sober, but this lasts only as long as the Quaaludes he purchases on arrival. He goes from lunch to dinner to night clubs, running into people he knows and getting high in bathrooms. Eventually he leaves New York with his father's ashes under his arms.

This will be a brief review, as there is not much to say. Whereas the previous book was a delight to read, this one was a bit too much work, probably related to the Hubert Selby Jr-level of detail related to heroin. If I ever wanted to know how to shoot up heroin properly, or even cocaine or how to ingest speed, this is the novel that I would turn to.

When I was fifteen, sixteen, whatever, I read edgy things like Palahniuk, Bret Easton Ellis, Cocaine: An Unauthorized Biography, Trainspotting, Fear and Loathing in Las Vegas, Blow, and other edgy stuff. My favourite movie in high school was Soderbergh's Traffic. I was thoroughly knowledgeable on all matters of hard drugs (although I knew next to nothing of pot - I didn't smoke pot until university and even then, only a couple times).

I think if I had read Bad News when I was in high school, I would have absolutely adored the intense details and copious descriptions of hallucinations that Patrick experiences. There's an extended sequence right in the middle in which Patrick imagines a Circe-like gathering of imagined and real people all yelling and doing whatever. I would have loved the shit out of this bit when I was 15.

Alas, I am 27 and I am not terribly interested in rich white upper class fellows getting high and hallucinating. I'm sure that St Aubyn, himself a former heroin addict, meant to write something chilling and threatening, but Patrick's highs come in the form of fantasy. One of the reasons why I liked the drug trade in fiction was the transgressive fantasy inherent. Instead of being a kid within a institution of school or middle class Canada, I could be my own entity, free of borders and nations. I could do and say whatever I want.

This is how Patrick acts. He is free of nationality (raised in France, English in origin, living in New York City prior to the text's events) and he is free of concerns related to money. He gleefully calculates the week's expense and totals it to ten thousand dollars (in 80s money). He says whatever he wants whenever he wants. He's mean, spiteful and snarky, but terribly witty as his father.

If Patrick isn't the 80s fantasy figure that I would have cherished, then I am not sure if there is any better portrait. Unfortunately, this is not a fantasy in which I wish to invest.

I suppose that reading this novel is more interesting to me as a measure of how my tastes have changed through the years. I have moved away from particularly edgy-on-purpose stuff (as I find it sophomoric) and treat my reading as exercises, rather than escapist fantasy (other than Doctor Who, of course).

Luckily, St Aubyn's spectacular prose and deft hand kept me captivated. I read the entire thing in two sittings, one short and the other a marathon. I still enjoyed the novel, but not as much as the first. This won't stop me from the reading the next three, though.
Posted by matthew.