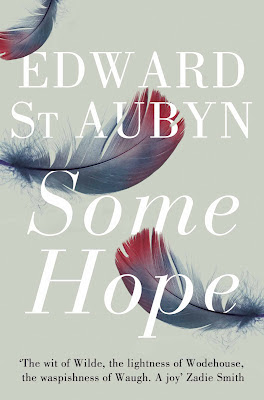 8 years after the events of Bad News, Patrick Melrose is resentfully sober. He is invited to a dinner and a party in which the Princess Margaret will be attending. Patrick is in a more contemplative state of mind, and he is trying to figure out what to do with the metaphorical ghost of his father that haunts him.

This is one of the books where I see what the author is attempting to do, so I get it, but I find it unconvincing or not wholly persuasive. Some Hope is a novel of two parts: a large introduction of characters who will converge at the party, have frivolous conversations (some of which I bet are real and captured by St Aubyn) and do frivolous things only the rich can do, with the second part of the novel being the more serious Patrick's difficulty with his emotions. There's a contrast being made here, and it's quite obvious, but not annoyingly so.

The best parts of the book are clearly Patrick, whom we have been following for over four hundred pages already. It's emotionally satisfying when Patrick comes to grips with the sexual abuse he suffered at the hands of his tyrannical father because we have been following him. Of course, this is the "end" of the "trilogy", so there needs to be some sort of catharsis. It's contrasted against the introduction and re-introduction of characters with whom we have no emotional investment. It's a deliberate choice, and while I commend St Aubyn for the attempt, I found it not to be persuasive.

There's a better novel in here, one that focuses mostly on Patrick and doesn't push him off into the corner for three quarters of the action. Patrick's emotional development is the whole point of these romans fleuve, so I'm not sure if I enjoyed spending so much time with newly introduced characters.

Not that it was a negative experience. The party scene, an awesome trope that I have immense love for, offers the reader so many instances of Wildean wit and stunningly prescient moments of insight, such as "If the talking cure is our modern religion then narrative fatigue must be its apotheosis" which chills me to the bone with its effectiveness. Plus, the party scene is quite entertaining thanks to its negative portrayal of both the royalty and the aristocracy, most of whom are as dumb as a bag of rocks but unable to recognize such a fact.

All in all, I enjoyed the novel for the Patrick bits, less so for the party scene which dominates the text. There are still two more novels in the Patrick Melrose cycle, but I might take a break and read some of the other billion novels on my shelves.
Posted by matthew.