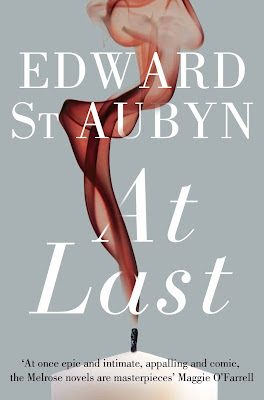 In the interest of full disclosure, I've actually read two books since I read Mother's Milk, but I'm not sure how to review them. So, without further ado, here is the last Patrick Melrose novel by Edward St Aubyn, or at least, the last as of 2012.

Patrick's mother has finally died. Instead of being a sad occasion for Patrick, Eleanor's death is a relief, a reprieve from the inexorable march of dementia paralyzing her both mentally and physically. The house at Saint-Nazaire has been sold and in the hands of Seamus, the charlatan, and Patrick has left Mary and the boys for a stay in a psychiatric ward to help with depression and booze. On the day of Eleanor's funeral, Patrick struggles with his feelings regarding the final death of his childhood.

With a final novel, a reviewer is tempted to summarize them into one pithy aphorism, reducing the entirety of the pentalogy to something easily digestible. If I were tempted to commit such a crime, I might refer to the sins of the father. Certainly, the final page of At Last turns this around, providing us with a last glimpse of Patrick in a positive light, yearning for his children in a beautiful and loving manner. He has spent four books and nine tenths of one being alone, sometimes aggressively so, and sometimes not of his own accord. Yet, at the end of At Last, when he has finally been unmoored from his turbulent childhood, he grasps for the warmth and security of his own family, the one he created, not the one he came to be part of by accident.

Unlike the anomalous Mother's Milk, At Last focuses on one day with laser-like focus. However, there are copious amounts of flashback, but frustratingly enough, not of scenes that explain how and why Patrick is in his current situation. I found myself anxious to read the flashback of the disintegration of Mary and Patrick's marriage, but it never really came. Instead, there is enough detail provided to piece together that Patrick's mental instability and infidelity led them to separate for the good of the boys. There's an engaging and addictive scene in which Mary reminisces on her brief meander outside the holy bonds of marriage with a philosopher named, amusingly, Erasmus. It's fantastic to get a glimpse of Mary as a woman rather than as a mother, something we were denied in Mother's Milk.

While St Aubyn holds back certain details, he lets loose with the theological and psychological implications of Patrick's unmooring from the past. Sometimes, it's quite exhausting when St Aubyn absolutely dissects the philosophy of mourning in such microcosmic detail. Fully one third of the novel is Patrick musing on the epistemology of mourning. While this isn't tonally unique in the pentalogy, it is somewhat boring when there is so much to accomplish in a final novel. Of course, the final episode in any series is always going to frustrate; there are so many questions to answer, but never enough time. The better authors of finales tend to focus on the emotional arc of the character rather than the pragmatic aspects. For example, if you'll allow a tangent, the finale of Lost answered so few questions but provided much emotional release. Jack Shepard fulfills his destiny and dies on the island he was meant to protect. He dies with a look of satisfaction while the plane flies away. That was enough for me, to be honest. I knew from previous experiences that Lost could never hope to answer everything, so I was content with emotional closure.

At Last is completely interested in closure. There are smaller moments of closure woven into the text, as when Patrick realizes that Eleanor meant different things to different people, and not all of those things are negative. He comes to understand that Eleanor was a victim as well, and that she was a good person, or at least a person who tried to be good. The needs of the many outweigh the needs of the few, or the one, as one character quotes Star Trek. There is another scene in which Patrick, in the deepest pit of depression, feels different. He finds closure at the fact that there is nothing different. He just isn't depressed anymore. His father is long gone and his mother's grasp on her son is tenuous at best.

These moments and a couple other feed into the final page, in which Patrick yearns for his children after expressing a desire for solitude. He's no longer an island, to use a hoary canard.

At Last is a pretty good novel, but it does not stand on its own. Its emotional effectiveness comes from experiencing the trauma and the self-injury Patrick goes through. Despite this, I thought the novel to be quite good. Sure, it didn't answer every question I had, but I received emotional closure, just like the protagonist did.

Overall, I felt the Patrick Melrose novels to be excellent. I'm not quite sure what to make of the entire thing, so maybe I will leave that for another post. Instead of writing that right now, I will provide a picture of where I was when I finished the novel, at Moxie's at the MTS Centre, enjoying a post-exam lunch and pint: 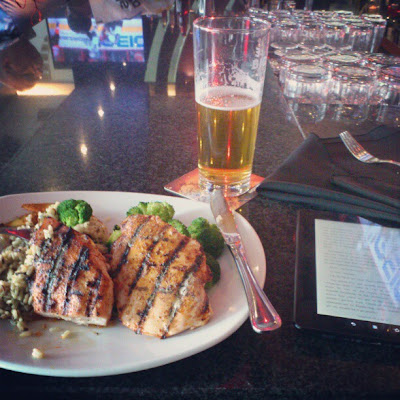