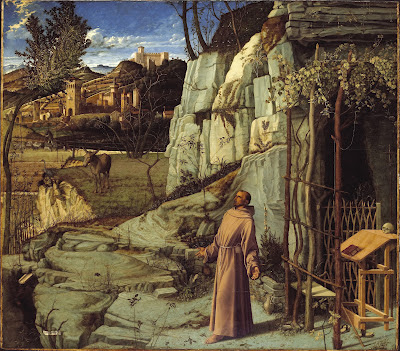 Here is Giovanni Bellini's St Francis in Ecstasy from circa 1480. This is a goddamn masterpiece. I'm not going to really "read" this but I am going to point out that the composition of the painting is pretty much perfect. Knowing that readers read from left to right, Bellini arranges the painting to have the reader's eye flow over the information in a fluid manner. Evidence: 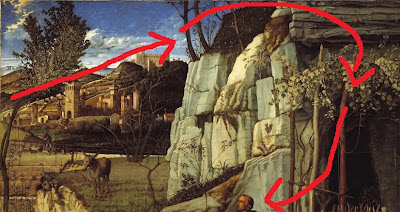 So I apologize for defacing a Renaissance masterpiece with MS Paint, but you'll notice that the top half of the painting takes the eye on an arc, culminating in the focal point, which is of the dude's arms open wide, inviting the eye. Notice the open space in front of our ecstatic monk: 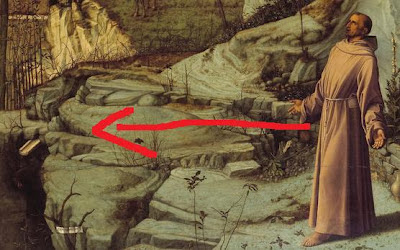 Thus moving the eye forward, returning it to the beginning, and providing a closed visual loop. There's a reason why this painting is a masterpiece, and it's not simply its fidelity to reality. Let's take a closer look at St Francis' face, shall we? 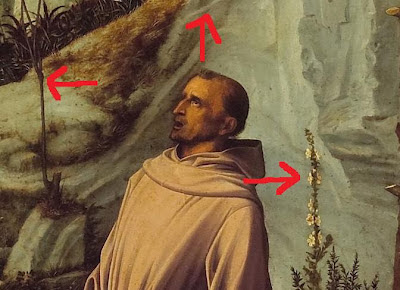 Notice that St Francis is framed by the two plants. This doesn't signify anything in particular, but it does provide a nice visual flourish. There are a few interpretations for his particular pose. Either he is expressing the wounds of stigmata, or he is singing a song that he wrote called Canticle of the Sun which is a praise to God for inventing the Sun, I guess.

Because this is a religious painting, or at least a painting from Renaissance, everything has signification, such as the donkey (humanity's laziness), the skull (humanity's mortality) and even the darkened shepard gazing at the monk. While I'm not particularly in love with Renaissance painting, one has to admire the sheer technical skill that the painters, especially Bellini employed in their endeavours.
Posted by matthew.

this is one of my personal favorites, having experienced spiritual ecstasy many, many times in my very lucky life. thnx for the pointers on details.