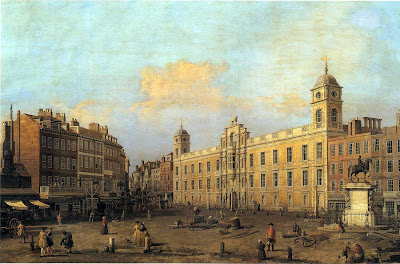 Canaletto was a 18th century painter famous for his landscape portraits of Venice. He moved to London in the 1740s and there produced this particular painting in 1752 which I am going to look at today. Northumberland House was a real place, obviously, but no longer exists as of 1874 or thereabouts. The style of the house is called Jacobean, which is the second phase of Renaissance architecture (the first being Elizabethan). This gives us a rather interesting parallax of styles: the vedute style recreating an older Jacobean style. Canaletto was well known for the level of detail in his large (almost impressionistic) panoramas. Even though he painted this in a studio, it is noticeable for the exhausting attention to accuracy. Here's a 1870 photograph of the building. 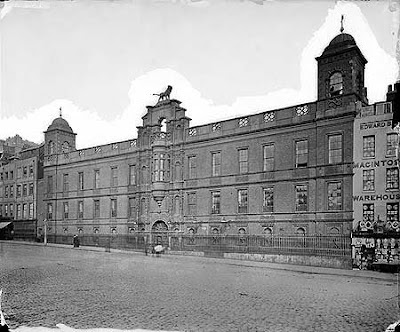 Notice the lion in both images. The lion represented the House of Percy, a long-standing wealthy family in England going back to the tenth century. This speaks to the level of detail Canaletto employed in his painting. Let's take a look at a couple details. But let's bear in mind that I have absolutely zero formal training in art or art history. This is just what I have learned in my years. 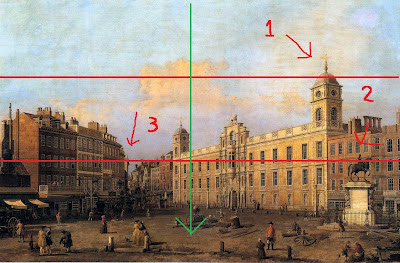 Remember that our typical model for colour expression is the RGB model, in which all colours are essentially a mixture of red, green and blue. If the colours are represented on a numerical scale with each of the three ranging from 0 to 255, then the brown third of the painting could be represented as red 92, green 51 and blue 23, or in a hexadecimal number that looks like this: 5C3317. This colour isn't quite the same as Canaletto's brown, as this is chocolate, but we're close.

Why am I talking about the hexadecimal number version of representing colour? Well, I just want to explore the idea that the palette that the painter used is quite complex. If we represented each third of the painting by a different hex number, we would have 5C3317 for the last third, maybe FFA500 for the middle and ADD8E6 for the top. Now, taking a look at only the top of the painting, you'll remember that "yellow" and "red" have been mixed for texture. So we've got FFA54F, CD6090 (almost magenta) and probably even C71585 (which is a dark violet). That's just in the sky! If I had something other than MS Paint, I could actually list all the colours rather than taking guesses.

Another good question to ask is why I am talking about thirds. Why split a painting into thirds? Most rules of composition suggest that to formulate a representation, the human eye seems to prefer an image that is easily digested in thirds. In my last post, I talked about the flow of the eye, going in a clockwise direction. Here is a golden spiral, otherwise known as a Fibonacci spiral: 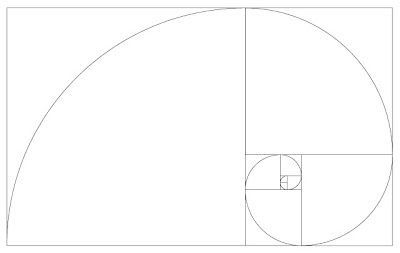 I don't have a good photo manipulator program, or else I would lay on image over the other so you could see that Canaletto's Northumberland House fits perfectly with the golden spiral. Point one converges with upper right section and the leftest part of the inner loop points to the third item I've marked. Most of the building itself fits into the loop on the right side of the image.

Notice that each of the three items that I have numbered mark off the thirds of the painting. It isn't by coincidence at all that the perspective of the painting was chosen so carefully. The painting manages to bring in all the elements of the architecture of the painting: the tower at the flank, which is tallest from our perspective, the fountain in the Strand, and then the winding of the street away from the painting.

Let's take a look at the section of the painting that includes the 3rd item: 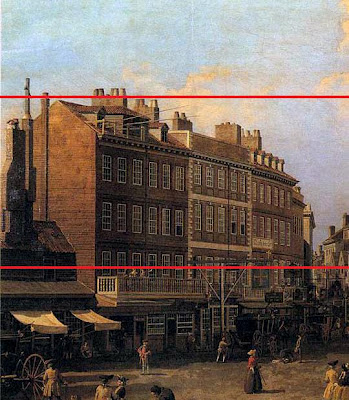 I have cropped a horizontal third and a vertical third from the painting, but have chosen the farthest left third vertically speaking. Notice that I have split this third into another third. Notice that the colours of the building create this effect already. That is to say that Canaletto's choice of colour and composition have actually delineated the thirds for your eye without the benefit of my garish red lines splitting the image. The darkest part of the building is the bottom, the middle part is a dark orange/brown and the lightest part is the roof/sky. And remember that is only a third of a third!

If the green line running through the vertical represents one gradient, then you'll notice that I could have drawn a green arrow moving left to right to represent another gradient, that is moving from the darkest left third to the lighter right third on the vertical axis.

Do you see how complicated the composition of a painting is? It's not simply a fidelity to reality, or a manipulation of light, it's also about how the image appears to the eye on the canvas. Canaletto is a master of composition!
Posted by matthew.