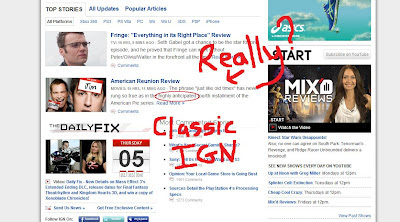 You may have to click on the picture to read the highlighted text. Suffice it to say that IGN has some of the worst online journalism I have ever read. It's so bad that it wraps around the quality spectrum to good because it's so terrible. Reviews for A list stuff is always glowing because IGN needs the advertising dollars and bad reviews turn off publishers and developers.

IGN is not a journalism site. IGN is an advertising machine drumming up interest for "geek" and "nerd" properties and doing "reviews" of things like American Pie's newest sequel, American Reunion.

IGN is part of the rapaciousness of the late capitalist system, I suppose is one way of putting it. IGN needs advertisers to continue - the advertisers are the ones selling the products that IGN reports on - IGN provides "good" publicity in return for advertisers' money. The dependence of the ads shifts from the advertisers needing to advertise their products to IGN who needs them. The industry as a whole has dominance over sites such as IGN. If you think it's bad for IGN, imagine what it's like being an indie developer or indie site, where reviewers must buy their own copies to review.

Each review that IGN posts is the same. They never engage with any text beyond superficial elements such as "interesting story" or "intuitive controls". Their writers have average quality prose and never convey any emotion beyond "I like video games". I absolutely love reading reviews of things that are objectively bad, like the second Transformers movie; IGN consistently rates things at 7 or better for A list material. Why would they want to alienate their chief source of revenue?

A bigger more scary version of this power dynamic was seen in Paul Abbott's State of Play, in which the newspaper's owners the editors to suppress a unflattering story about the government in order to avoid disrupting a large deal between the owners and the government. Absolutely scary and absolutely true.
Posted by matthew.