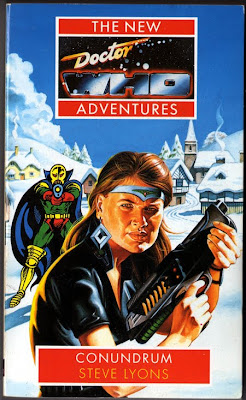 The Doctor, Ace and Benny arrive in a small English village where people are being murdered, a man claims to be a superhero, a witch is roaming the streets, a group of child adventurers are investigating occult sacrifices, a hard boiled detective is tracking somebody, and everything seems to point to the oddly named Vampire Castle. Immediately, something seems sort of fishy, as if the TARDIS crew were in a mash-up novel of 20th century fiction. But that sounds oddly familiar to the Doctor, though he needs to figure it out before he and the crew end up dead.

It's been almost six months since I have read a Doctor Who novel. The last one I read was Jonathan Morris' Festival of Death, which I reviewed here, but is easily the best novel in the entire DW oeuvre yet, despite its weak prose. The reason for my absence is the same for my absence from anything: I just couldn't do it during school. However, I finished my last real exam today and I also finished a series of five novels by Edward St Aubyn. It was high time to return to one of my greatest loves, Doctor Who. Instead of picking something specific, I decided to dive right into the series, continuing with the Virgin New Adventures.

This particular entry was written by Steve Lyons, who would go on to write a couple other books, mostly distinguishable for their surreal humour and metafiction. I'm not terribly keen on surreal humour and my love of metafiction dwindles with every novel I read featuring it. However, Lyons' prose and complex plot were enough to allow me to read this entire novel in one evening.

It's not terribly complicated, but Lyons has fun with it. The Doctor is meant to win so that when the book is over, he and the crew will be trapped within, and the Master of the Land of Fiction can be released from the task of writing adventures. If this scenario sounds familiar, it's because Grant Morrison plays with this all the time, among other authors. The Doctor plays his giant game across the novel, and even allows for the novel, or at least the story to comment on his playing of games.

What separates this novel from the previous few is that the conflict between Ace and the Doctor is seemingly coming to a head. Hopefully, the Alternate History saga, which ends with the next novel, finally brings a conclusion. But despite the lack of closure or catharsis, there's an emotional maturity beating under the breast of Lyons' Conundrum.

There's a great scene in which Benny and Ace finally open up to each other about the distrust amongst the crew, and it's quite effective, despite being surrounded by the chaos of the surreal humour. Lyons is able to really capture the voice of this new angry Ace, and lets Benny and the reader in on a glimpse of the original Ace beneath the exterior. It's particularly effective because of its anomalous nature sandwiched between superheroes and kid-adventure groups.

The metafiction aspect is less effective however. Which is a shame because the book's main theme is metafiction. While I am sure Steve Lyons has read metafiction before, or as at least heard the term, I'm not sure if he totally understands the point of it. One of the aims of metafiction is to destabilize the primacy of the text and "deconstruct" the authority of a text. Deconstruct in the Derrida sense of the word. Conundrum is baby's first metafiction, unfortunately. Lyons has the Doctor comment on the formulaic aspects of the show ("corridors, monsters and I haven't been arrested yet") but never does anything with this. Ace stumbles in an library and knocks over Love and War and Deceit, which I assume is meant to be a comment on the conflicting continuities of show and book. But again, Lyons never does anything with this. It's merely a nudge in the ribs from an authorial elbow. I'm not convinced that Lyons has said or done anything particularly noteworthy with the metafiction aspect of the novel. There's nothing insightful about pointing out that Doctor Who is a fiction in a land of fictions.

However, there's a small moment near the end where Lyons manages to say something provocative. The villain of the piece, if you'll allow me to spoil a 20 year old novel, is that the Master of the Land of Fictions is actually an angry young man who thinks "maturity" in storytelling is synonymous with exploitative violence. There's no reason not to suspect that Lyons is commenting on the Sturm und Drang of early 90s fiction, when everything became "extreme". This is the moment that really brings Conundrum a step above a Grant Morrison-pastiche.

Despite my writing two paragraphs on the inefficiency of the metafiction elements of the novel, I quite liked this book. It was exciting, the prose was clear and never irritating, the main characters extremely well-drawn and the supporting cast were enough to stand out from each other enough to make sense. The mystery at the heart of the novel is simplistic, but that's really the point isn't it?

Lyons apparently returns to this metafiction with Head Games, but that's the forty-third novel and I just finished the twenty-second. It will be a while before I get there. I'm told that Head Games is a more effective metafiction, but that remains to be seen.

Here's to returning to Doctor Who after a hiatus!
Posted by matthew.