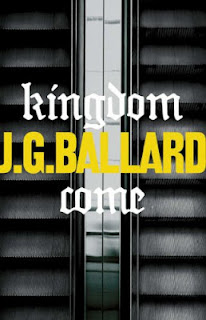 Richard Pearson is a fortyish advertisement man who has lost his job, and then lost his father to a seemingly random shooting in a mall. A gunman opened fire indiscriminately within the great Metro-Centre, a cyclopean dome looming over the suburb of Brooklands. Pearson travels there to sort out his fathers' affairs when he comes into contact with a suburb boiling over with racial tension, institutions of law and order without affect or energy, and an almost eerie worship of a shopping mall. Pearson becomes embroiled in a conspiracy that doesn't have a message other than the constant enjoinder of enjoy yourself.

This is my third Ballard novel and I'm not quite sure why I decided to read this particular one. I think it was due to the shopping mall angle of the piece, which interests me right now due to Fredric Jameson and a host of other Marxists I've been reading. I knew what I was getting into reading Ballard: the gorgeous but stilted prose, the haunting imagery, the blank-slate characters who are nothing but mouthpieces, and the cruelty. Before he died, I wonder if Ballard ever achieved a sense of self-satisfaction in the face of being right all the time.

The themes of Kingdom Come are of consumerism, violence and where the two meet. Here's a bit that I've underlined in my library copy so that future generations can read it and be like, "Holy shit, this guy was right":

This novel is fairly prescient and intuitive in its exploration of consumerism and violence. Both are concluded to be instinctual and purely emotional. Pearson, the narrator, positions a local tv star into the leviathan or fuhrer of a new resistance, a resistance to the middle classes, to the governments, to the everybody and anybody that stands between them and their products to buy. The TV star is coached by Pearson to cajole, energize and punish the crowd seemingly at random. People want to be punished, Pearson continually tells the star.

Late capitalism as formulated in this novel breeds fascism. There is too much choice, Ballard argues, and politics has become less about ideology and more about protean figures to vote for. It's less about the ideas and more about the people who are essentially products. With no ideology in the discourse, fascism enters the vacuum and asserts control. Fascism inevitably leads to violence.

The cabal of professionals in Brooklands who seek to undermine the forces of fascism attempt to displace the Metro-Centre as the altar of worship. Without the authority of the mall, consumerism doesn't define the lives of the people. Without consumerism, there is hope that people will awaken and realize the limits placed on them by the government and other discursive institutions.

All very interesting ideas, but of course, Ballard throws them together in the driest possible way. The main character in typical Ballard fashion is completely without affect, a symptom of the postmodern condition as formulated by Fredric Jameson. While it was interesting to read something so obviously influenced by my favourite thinker du jour, it's not the world's most entertaining read.

I suppose people read Ballard for the thrill of somebody finally saying something they had been thinking all along. Every single person in the Western world looks to the mall and sees something vaguely disconcerting, a new temple that sucks all of their money and replaces it with objects we immediately regret. Ballard is one of few who explicitly points to it and says that's it's not the world's greatest idea because it's a lack of ideas. Consumerism is displacing our own sense of individual identity. We are being further atomized by the discursive institutions that rapaciously colonize every market.

There are many brilliant moments in Kingdom Come that show why Ballard was one of the world's best writers in the 21st century but it comes at a price. There's no emotional engagement, and while that might be part of the plan, it provides a somewhat stunted response from this reader.
Posted by matthew.