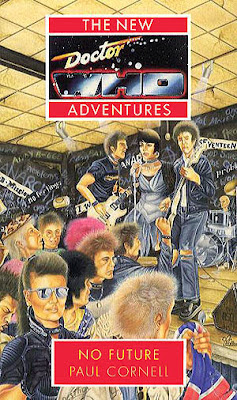 Somebody has been meddling with the Doctor's past and the final clue to follow leads the TARDIS crew to London, 1976, the dawning of the age of punk. But something's not quite right: punk bands are being released on CDs, the Brigadier doesn't recognize his old friend the Doctor, and Ace seems to have gone off the deep end.

This whole Alternate Universe saga comes to a close with Paul Cornell's No Future, a book just absolutely mired in the Englishness of Doctor Who as a concept. There's punk, dub, Margaret Thatcher, polite soldiers that say "you wut mate?" and people are forever drinking tea. But more interesting than this is the book's primary question: what happens when you take away the Seventh Doctor's ability to leave messages from his future self? Really, the Virgin New Adventures have taken off from the First Law of Time and have explored what happens when the Time Lord truly becomes a Lord of Time. The godliness that predates the Tenth Doctor's ascension begins with these novels and Paul Cornell makes the drastic move of taking it away.

Now this theme has been popping up, and I'm not going to say Cornell is the first to do it. The Seventh Doctor has become all powerful and the last like five NAs have featured this line of dialogue: "I swear I don't have a plan! I don't know what happens next!" in an attempt to provide some drama to the narrative. It's exhausting because I know that the Doctor does have a plan. Rule one: the Doctor lies, after all. However, Cornell does provide some wrinkles to the Virgin NA formula, which is somewhat of a relief, but ultimately, No Future is comfortably a Virgin Seventh Doctor adventure in which he stumbles across an evil and plays chess against them. He even says the word "checkmate" to the villain.

Now, since this is the culmination of the arc, there are a couple of things Cornell's novel is required to accomplish: the identity of the villain and his or her motives, resolve the conflict between Ace and the Doctor, and more recently, resolve the conflict between Ace and Benny. For five books, I've been complaining - not quite complaining but kind of fussing - about Ace's behaviour. Many Who fans express disdain at New Ace, what with her battle suit, mirror shades and total change from the wide-eyed youth of the television serials. However, I have no emotional attachment to her, so I am totally willing to believe that she kind of goes crazy after years of manipulation at the hands of the Doctor. New Ace is a logical extension of that overcorrection by Ace. What bothers me though, what makes me fuss, is that she complains so much and expresses so much animosity, that there is no reason why she would travel with the Doctor. The previous novel, Conundrum, attempts to address this, but without any resolution. In No Future, Cornell has Ace play a game with the Doctor in order to teach him a lesson I suppose. After "killing" the Doctor and entombing him in a casket of oxygenated water on the side of a mountain on an ice planet, Ace somehow feels like they're even.

If this last plot bit sounds exciting, don't be mistaken. It only comes at the three quarter mark of the novel, after a long and tedious buildup that crowbars a punk band into the plot. This is the slowest New Adventure I have read, which is saying something considering Time's Crucible was painfully slow. Cornell's No Future puts a bunch of pieces in place for a huge firefight but then has some technical gobbledygook that allows the heroes to win.

Remember when I said this was a novel featuring a punk band? Well, it's also a rather political novel in that Cornell addresses some of the events leading up to the Thatcher era. Hence, the punk band. But if we agree that No Future is a punk novel in ethos (the title is a reference to a Sex Pistols song), then why does the military play such a prominent role? After the punk band is tediously introduced and shoehorned into the plot (Benny joins a band because the Doctor knows it's important but not why), the pragmatics of this element amounts to a tiny scene that doesn't make any difference in the end. UNIT, the Brigadier and authority come to rule three quarters of the novel and are indispensable by the end. It's somewhat irritating. And not just because it doesn't fit in with the punk ethos but because the audience has to be forced to read bits of dialogue between the military and the punks: "You're the authority, you're what's wrong with the world, mate" etc etc etc.

It might sound like I am not a fan of this novel. Well, not really, save for the end. After the long buildup, when the Doctor gains the upperhand, the whole novel is saved by a scene in which he delivers a speech to the villain that surely must have been an influence on the Eleventh Doctor at the Pandorica. It's staggeringly well-written. The climax of the novel, which wisely uses the plot points scattered throughout, is excellent.

It's just a shame we had to read so much crap to get to the good bits. Since this is Cornell, the reader is guaranteed some fanwank elements. I had to consult my Discontinuity Guide (co-written by Cornell) and the TARDIS Wikia a couple times just to make sure that I was in on the joke. This isn't a bad thing for me, it doesn't bother me, but I could totally understand why people would find it irritating.

Regardless, I didn't hate this novel, but I sure didn't love it. It's somewhat of a disappointment considering Cornell's two previous entries and his next novel for Virgin. Oh well. Onwards to another Gareth Roberts novel!
Posted by matthew.