Before Watchmen, IGN, and other nonsense 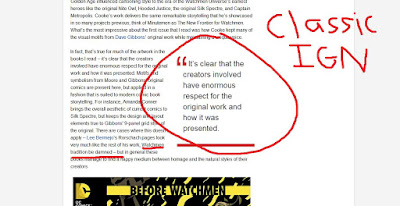 This blog has looked at IGN previously and concluded that the site is not journalism but simply an advertising machine, and one cannot even blame it for this considering it needs the revenue to function. There's a fine line between being a news site that offers information on a product and an advertisement that promotes information on a product. IGN is going through, has gone through, an identity crisis where it attempts to navigate that fine line. Unfortunately, it has failed to keep its head above the waters of gross capitalism. It has succumbed and traded in its journalistic integrity for the simple fact that people need jobs and this is how one keeps their job - in this particular industry, I might add.

In the picture posted above, from an early preview of DC's misguided Before Watchmen, the reviewer states simply that the talent on this project "have enormous respect for the original work and how it was presented". Let me just say right from the beginning that no, the talent does not have respect for the original work. If they did, they would have respected the creator's wishes and not contributed to a cash-in sequel that narratively speaking adds nothing to the original self-contained 12 issue mini-series (not a fucking graphic novel). This might be the angriest I've ever been with the entire comic book industry right now.

Before Watchmen adds nothing to the discourse of comics and in fact, devolves the work done by progressive or forward-thinking artists and writers. Before Watchmen is the culmination of a trend of looking backwards and never adding anything new to the discourse. For the past twenty to thirty years, the zeitgeist has been mining the past for inspiration, never looking forward and wallowing in the triumphs of the previous age. Even Watchmen itself, an original work, is interested in "deconstructing" (in a layman's kind of way) the icon of the superhero. It added two things to the discourse of comics: revealed how psychologically damaged superheroes are and helped instigate a fundamental misunderstanding of realism which has lasted even to this very day. Both Watchman and The Dark Knight Returns contributed the genesis of the "grim and gritty" era of comics that has yet to die. This is a mode of storytelling where the idea of "mature" is conflated with excessive gratuitous violence and sophomoric sexuality.

Now, Watchmen is almost twenty years old, and its style of tone (rather than technical style) and texture has been replicated and reproduced countless times by writers not nearly as self-aware as Alan Moore. For a perfect example of this, here's a picture of a Green Lantern character puking blood: 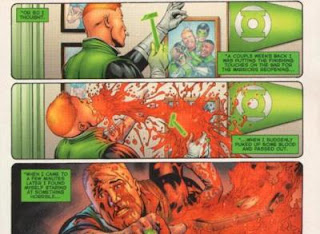 Geoff Johns is the writer that perfectly encapsulates the conflation of mature storytelling with excessive and gratuitous violence. His work is puerile, sophomoric and most importantly, stagnant. Every story he tells ruthlessly mines the past for inspiration. He is the perfect postmodern writer as formulated by Fredric Jameson. Blackest Night, the giant crossover that ruthlessly uses the culturally hot zombie, found its inspiration in a throwaway line from an Alan Moore short story from the early Eighties. Johns has brought back Hal Jordan, erasing and reframing the 90s as simply a virus, and Barry Allen, the "classic" Flash we're all interested, despite the amazing work writers have done with Wally West (who is a superior creation). All of this has been in pursuit of the comic book reader who has grown up with comics and seeks a more "mature" story than the comics of their youth.

Before Watchmen is exactly this. It is an attempt to capitalize on the fact that many people grew up with Watchmen, or at least, Watchmen's looming shadow over the history of comics. I didn't read Watchmen until the early 2000s when I was in my early twenties, but I had heard of it, and I had understood its significance. However, I am a minority. Many readers who grew up with the 90s, the garish pockets, the over-sized guns, the ludicrous anatomy, the complicated time travel stories that never made any sense, these were all mutations from Watchmen and The Dark Knight Returns. Both of which feature crypto-fascist superheroes currently idolized (including by me).

Film Crit Hulk, one of the best writers working in cultural studies right now, wrote a piece about Batman. He argues that if you idolize Rorschach or the crypto-fascist version of Batman or even the anarchist Joker of Nolan's The Dark Knight, then you have severely missed the point. By idealizing Rorschach, you have totally missed what Alan Moore was saying about superheroes. They're not to be idolized or revered because they are severely damaged individuals. Only the most screwed up of people would want to wear a mask and physically punish people for a variety of crimes and misdemeanors. With Rorschach, it's codified in his subscription to the extremist right wing racist group that eventually receives his diary in the end. You're not supposed to identify with him or his political beliefs. You're supposed to question yourself and ask yourself why you look up to Batman and Rorschach.

Thus, by writing and drawing new works that celebrate the cast of Watchmen, the creators of the new project are showing the least amount of respect for the original intent and meaning of the 12 issue miniseries. They have misunderstood the political aspirations of Watchmen and thus have no respect for the work.

The analogy to make here is if somebody made a sequel to Atlas Shrugged that featured John Galt working with charities. It would be disastrous and completely stupid.

On top of all this is the fact that Alan Moore is an outspoken critic of the comic book industry itself, not only how he was treated but how numerous others have been treated. I'm not going to systematically take apart all of the counterarguments to Moore's criticisms except for one: the contract. When Moore and Gibbons signed the contract, the spirit of the thing was that once the trade went out of print, the rights would revert to them, with every party understanding that this would happen inevitably because the trade paperback industry wsa fickle and hadn't taken off in the way it had now. Unfortunately or fortunately, depending on who benefits, Watchmen went on to become a massive success, critically and commercially. Never before had something resonated with consumers or their wallets on the same scale. Merchandising, the next logical step for DC and any other business, was hands-off according to the contract and the creators' wishes. However, DC went ahead with it anyway, thus violating the spirit of the contract. I'm simplifying a complex legal situation but suffice it to say that the contract screwed Moore and Gibbons, but they signed it regardless. Jim Lee's response to this recently was that Moore didn't read the contract and that nobody can force the signer to read what he's signing. The immediate response is of course, that it's Moore's fault.


However, my point is that it's shitty that the contract existed in the first place. The fact that the industry had normalized such ethically questionable behaviour to the point where it was expected is fundamentally worrisome. "Of course Moore got screwed - that's how things were" does not justify or excuse the treatment of other artists and writers who were taken advantage of before and after Watchmen's success.

I wrote about this on Robot6's forums a few weeks ago, when I decided to donate 14 dollars to the Hero Initiative rather than go see The Avengers. I have slowly but inexorably drifted away from Marvel and DC over the years due to a multitude of simultaneous reasons.

1) The industry is no longer and has not been a creative arts industry in over twenty years due the logic of late capitalism
2) The stories and characters being produced are merely repetitions of stories and characters I already grew up with
3) The increased focus on line-wide event stories has forced writers and artists to compromise their artistic vision for sales-baiting tactics
4) The treatment of artists and writers over the past 60 years and my increasing awareness of them has made buying comics less desirable than ever.

However, I still like to read IGN talk about things like Before Watchmen because they do so without any modicum of irony or self-awareness. The writer in this particular article makes mention that this pool of talent would be better served creating original material, but he swiftly puts that objection out of his head by fawning over what's been given to him. This serves to prove my point perfectly. The system has normalized behaviour like this where we are happy to accept anything we receive, even if it's a sequel or a prequel that betrays the meaning of the original work or if it's demonstrably poor storytelling and a ruthless exploitation of nostalgia. Because all of this is the norm, we accept it and provide the industry with our money.

Well, no longer. I have stopped buying comics from Marvel and DC entirely which is difficult considering I would like to support artists and writers such as Jonathan Hickman, Frank Quitely, Brian Azzarello, and a host of others, but to buy their products means giving my money to giant conglomerates such as DC, Disney, or GE.

The naive part about my protest is that the same conglomerates that own Marvel and DC will get my money any way through any product that I purchase. No matter what I do, no matter what I consume, my money flows into the hands of six companies. However, I can make a microcosmic stand.

This is something I wrote about when this blog was new. I said that the only way to make our voices heard is through our wallets. Then, I meant buying the products we wish to support that are ethically positive and high quality. Now it means that I can no longer support the system itself, including the positive elements. It's become an all or nothing proposition for me, and it starts with Before Watchmen.

Please don't purchase Before Watchmen. Don't even read it. It's just good karma.
Posted by matthew.