The Death of Culture? 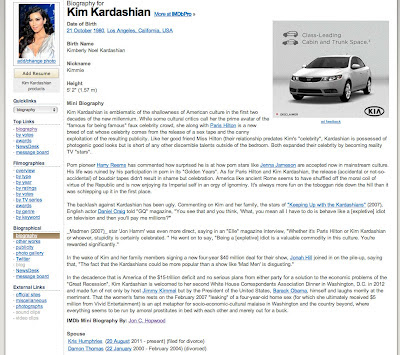 Have we truly reached the end of culture? Obviously not, but this bio for IMDB written by a comedian points to something quite interesting. He writes that the US currently operates at a 15 trillion dollar deficit, but has no problem inviting Kim Kardashian to the White House Correspondents Association Dinner. The implication is clear: Kardashian is a distraction, a tool being used by the political discourse (rather than a specific party or individual) in order to keep Americans from revolting a la Occupy Wall Street.

People have been signalling the death knell of culture since culture existed. However, American culture seems to have gone into a specific holding pattern over the last twenty years. No longer is the taboo unwelcome, but celebrated. Is it a reaction to the relative safety and comfort and high standard of living that Americans enjoy?

Only in North America could we have such a high standard of living and then subsequently complain about it. I'm not really sure what to make of it. I'm currently thinking about a rather long blog post that will probably end up an academic paper in the future, one that touches on the collective fantasies of the most privileged generation in the history of the United States. But, for now, here's a well written and surprisingly fair assessment of Kim Kardashian.
Posted by matthew.