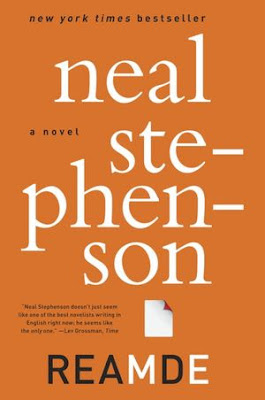 Neal Stephenson's novels usually take me a long time to finish, and this is saying something considering how fast I read. Part of the reason they take so long is that the novels are usually over 800 pages. The sheer size of his novels are intimidating. But the other reason, which I will expand on in the review of his latest novel, is that Stephenson chases after every single strand in his novel with such obsessive focus and logic, that the gross amount of detail is overwhelming and exhausting. No other Stephenson novel seems a better example than 2011's Reamde.

Ostensibly a techno-thriller in the vein of his pseudonymous novels or any other airport thriller, Reamde is a challenge to other authors working in the same genre. The challenge is simply put: any event you put into your novel must flow logically and practically from the previous event. It sounds simple enough, but it isn't. Authors toss in any idea that captures their attention, whether the idea fits into the logic of the narrative or not. For example, in Angels and Demons by Dan Brown, dark matter is included, but without any logical reason. Its appearance in the novel is meant to function as MacGuffin as well as to confound any layman with technical mumbojumbo. The unfortunate effect for any learned reader is the quickly dawning awareness that Dan Brown has no idea what is dark matter. Reamde takes the same approach, seemingly, in including anything and everything. Stephenson's gigantic imagination, piqued by random facts, finds a logical and coherent manner to include everything, from how modern speedboats work to how flight plans are created to how international air corridors work and so on and so forth. Reamde is a 1,000 page collection of seemingly unrelated facts strung together by a tightly focused plot without any detours.

The very moment I write, "without any detours" will shock any avid reader of Stephenson who is yet to familiarize themselves with this novel. Cryptonomicon, while entertaining and masterful, suffers slightly from detours which in the long long long run, end up contributing to the plot, but only in the smallest of ways. Reamde is without detours. This is the first Stephenson novel that could ever be considered focused, and in typical Stephenson manner, it is obsessively focused.

Reamde runs down the scenario to its logical conclusion and painstakingly details every single step that brings the various strands together to its violent and operatic finale. 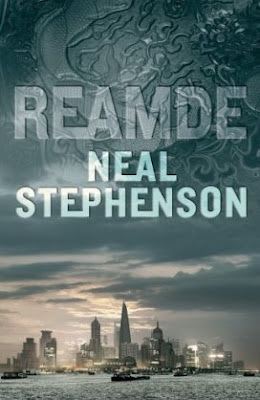 One of the best examples come from about 680 pages into the novel. Csongar, Marlon and Yuxia are on a yacht without any fuel in the middle of the ocean. How they've arrived in this situation would be too laborious to detail. Without any fuel, the three create sails and a method of navigating through a storm without capsizing. In other novels, written by less logical and stubborn authors, the events would have been described as simply, "they made sails and then figured out how to use them". Not Stephenson. He refuses to allow any fantasy to creep into this novel. Instead, the three characters must learn how sails function, how to make them, and how to utilize them. It takes about five pages of description, which probably translates to a few hours of research time for Stephenson. Not only do the characters have to learn how to use sails, but Stephenson also has to put into place how the characters have the ability to figure out such things.

Stephenson's ability to put elements into play early is one of his strengths. Much of Cryptonomicon's success is due to the vastness of the playing field and how carefully the author moves his pieces across. The gold in WWII is carefully put into place just so the gold in 1999 (or thereabouts) is carefully picked up. Each element of the character is well seeded so that when everything finally comes together, the reader never feels cheated out of something. Everything happens for a logical and pragmatic reason.

The same can be said about this novel. The climax of Reamde featuring the cast coming together to the main character's family's cabin, where a long (150 pages) shoot out occurs. In terms of pure narrative pragmatics, Stephenson spends a full three hundred pages making sure that every member shows up for the party. That is to say, that some characters who don't know about the cabin must find their way to the cabin in a very logical and pragmatic way. Sometimes this takes a while, and Stephenson never cheats the reader out of the multi-step process by which the distantly related characters come to the conclusion that the cabin is where everything goes down.

Even the virtual world of T'Rain, where the virus is introduced, plays into the logic of the novel in a way that is not gratuitous or "cool" in the way computers were shoehorned into narratives in the early 90s. This might sound familiar, if you've read Stephenson's earlier novel Snowcrash, a novel that I would go as far to say is awesome but I'm too nervous to re-read it for fear it won't match up to my memory. In Snowcrash, Stephenson visualizes the Web as a virtual world, a simulation of the real world called a Metaverse. Of course, the simulation of the world isn't one to one nor does it approach maximum fidelity. In true Stephensonian fashion, the logical outcome of such a technological novelty is that it would turn into a market. This is something already touched on in Snowcrash, but Stephenson, now armed with more knowledge about commerce than all the top sci-fi authors combined, takes to 2011 with T'Rain. Of course a simulated reality would feature a capitalistic market that works with and alongside the real world's market. The joke is, of course, that the real world market is as virtual and digital as T'Rain's market.

Stephenson's pet themes are explored in Reamde as expected: commerce, technology, guns, the Philipines and gold. However, the pet themes are in service of the plot, rather than the other way around. No longer does the gold function are merely MacGuffin, but as an integral factor in the motivation of a collection of disparate characters. The gold in the Baroque Cycle is just a way to move pieces around the board, not as in Reamde where it the ultimate goal.

Reamde's tight focus is what made the 1,044 pages zoom by in two large chunks. I began reading this in September when it was published, made it about halfway, and then in typical fashion, I set it aside for a few months. This occurs every time I read a novel by Stephenson. I thought it would be different this time, but it was not to be. This isn't a criticism of Stephenson at all. Far from it. The very fact that his novels exhaust me with their detail is what makes me return time and again to his fiction. I recently purchased a hardcover early edition of Cryptonomicon because I want to re-read it, but I know it won't be for a long time, and even when I do, it will take time. Reamde isn't quite as satisfying as the earlier novel, but it's certainly more coherent and straight forward. I quite liked Reamde, even if longer novels tend to be overpraised by virtue of being completed.
Posted by matthew.