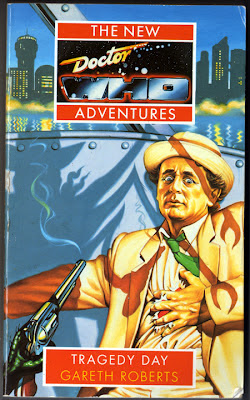 The Doctor, Bernice and Ace end up on this planet where every year, the rich celebrate their wealth by making charitable donations to the deserving, the downtrodden. The TARDIS crew quickly deduce that this is merely a psychological trick to keep the poor in their position. But as quickly as they arrive, Ace is stuck in a concentration camp, and the Doctor and Bernice are accosted and arrested by the police. Two assassins are on the trail of the Doctor while the rich celebrities of the planet appear to be robot duplicates. An old and vast conspiracy is coming to a head in this year's Tragedy Day, and it involves genetically engineered animals that are described like Sharkticons and ancient sitcoms that sound like Leave it to Beaver.

Yeah, I know. This novel seems like it would be a big mess. And it sort of is, but in an endearing kind of way. Tragedy Day starts off rather slow, with too many prologues, which is beginning to be a rather tedious and over-indulgent trend with the New Adventures (the next novel's prologues last over 60 pages). However, by the middle of the novel, Gareth Roberts' wit takes over and lets the absurdity of the plot shine through.

There are a couple good things about this novel other than Roberts' wit. Number one is that a supporting character is gay. That's not remarkable in of itself. What's remarkable is that it's totally unremarkable in the novel. It's simply a part of his character, and it's quite fascinating. This novel was published in 1994, so it's absolutely refreshing that the gay character isn't tokenized or specialized in any way. Remember that in the early 90s, gay characters came in two forms: tragic figures dying of AIDS, or mouthpieces for agendas of tolerance. Both forms homogenized and robbed gay characters' of unique and individual voices. Luckily, we've sort of moved on from this, and Roberts' portrayal of a gay character presages this slightly.

Another good thing to say about this novel is that the pace never slackens. No Future, the previous novel, had a really tough time building up steam. Tragedy Day, after its aforementioned tedious prologues, creates drama and mystery within the first couple chapters. A refugee camp? A mysterious island with Sharkticons? A cult with a leader obsequiously named The Supreme One? Robots in disguise as newscasters? The disparate and somewhat ludicrous elements are thrown at the reader in the first little bit, similar to how Steven Moffat started his early episodes for Who. The more confusing and off-putting the elements, the more likely I would want to stick around to see if the writer could pull it off. Roberts introduces his madcap scenario and lets the cast loose.

It's nice when a writer doesn't introduce artificial obstacles in the plot in order to sustain drama. Tragedy Day simply allows its main characters to move around the board without hindrance. In typical new Ace fashion, she's interested in weaponizing the situation, whereas Benny gets involved with subterfuge. Roberts also allows for the companions to be intelligent. In a novel of robot duplicates, it's predictable that one of the TARDIS crew will be replaced, yes? Roberts however is too witty for something so pedestrian. When the fake Doctor shows up, Benny and Ace figure out within pages that he's not the real deal. Simultaneously, the real Doctor has awoken into a scene that doesn't end the way you expect, proving that Roberts can successfully pull off a bait and switch, narrative speaking, that is.

However, I didn't love the novel. The planetary villain is uninteresting, and his motives for a) villainy and b) the eleventh hour turnaround are never properly sketched out. He remains one-dimensional. The celestial godly villains have even less motive and less screen time. However, they participate in a rather well-paced and suspenseful climax, so I am willing to forgive their murky and ill-defined characters. On top of this, there are just too many characters. The novel's not even 300 pages, and there are a lot of people one must keep track of, including a Stetson-wearing, leather jacket-sporting seven foot tall arachnid with a Lancashire accent that is introduced to the plot if only to produce chaos and swiftly departs from the narrative as quickly as was introduced. Tragedy Day does not employ the New Adventures' strongest cast. At all.

I guess I was a bit disappointed considering how highly I think of Roberts' first New Adventure, The Highest Science. My expectations were set rather high and Tragedy Day, while entertaining, wasn't of the same caliber. Roberts' wit and deftness managed to save Tragedy Day from being abysmal. In the hands of any other writer, this novel would have been atrocious.

Here's a picture of the Sharkticons, so you can see what I was imagining through the novel:

Yes, I imagined a Transformers character to read a Doctor Who novel. And I wonder why I am still single?
Posted by matthew.