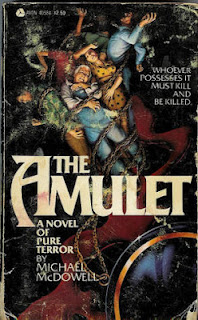 Southern fiction is sweaty, mean, and filled with a sense of the grotesque. That is why it's all the more believable that a Southern Gothic could turn into a Southern horror novel. At first glance at that cover, you'd be forgiven for thinking this is just another post-King horror paperback with a predictable cast of blue collar people trying to scrape by until some unimaginable horror (usually from the every day) saunters in and destroys their lives. At this point in the review, I'd say that this novel is anything but. Of course, I'd be lying to you.

The thing about my love of genre is not that I love things that resist genre, but things that execute within the genre with perfect ease. Not every novel I read needs to be the one novel that breaks away from convention and does its new thing. If you read all of my reviews on genre fiction, you'll notice a pattern in that I'm searching for the examples that function the smoothest. Just like in my glowing review of A Gentleman's Game, I'm interested in the best examples of the genre, the ones that gather up the various gears and cogs of the genre and interlock them in the most efficient manner possible.

The metaphor of a mechanism of precision is often used in conjunction with thrillers that seem the tightest, and it's one of the better comparisons to make. A great representation of a genre is a watch that never loses time and never leaves its owner behind. The Amulet by Michael McDowell is a simply stunning example of the genre.

It certainly doesn't start out like other examples of the genre. The first thirty or so pages of the novel are sketches of Pine Cone, Alabama, a small town numbering maybe 2,000 souls. Using little to no dialogue, McDowell carefully and artfully draws the reader into the town, detailing the various economic and sociological struggles that faces every single member of the town. Certain details sound completely true, and probably came from McDowell's upbringing. For example, the school quickly rescinds their recent ban on students without shoes because too many children are staying home, too poor to afford footwear. Bits like this help establish an evocative sense of place.

One of the hallmarks of the horror genre is to create a small town, populate it with a lively cast of characters, and then slowly or swiftly demolish it. I can point to literally dozens of examples. What helps The Amulet succeed within the genre is that McDowell's small town of struggling, religious normal people feels so absolutely authentic.

It's a vivid evocation of a town that is swiftly populated with a cast of characters. In genre fiction, when introducing a character, the usual procedure is to detail their name, their physical description, and enough background to keep the character from blurring too much next to other members of the cast. One of the reasons why Stephen King is the master at what he does is that he slowly builds those details up and repeats them. Characters remember snippets of songs that circle through their head, ones that remind them of their youth or an element of their past. King understands the madeleine and its power. This is a fundamental tool for the genre writer, and honestly, for most writers.

McDowell doesn't do this any differently. He just does it better. He provides enough background information and biographical detail to allow the character to be visualized, then he simply uses the character and their makeup to propel the plot.

The mechanics of this plot are simple. Sarah Howell is a 20 year old girl married to an injured soldier, Dean. He is practically comatose, his head wrapped in bandages, unable or unwilling to speak or make motions that he understands. They live with Dean's fat spiteful mother, Jo. When the man in charge of hiring at the rifle factory shows up to express his condolences, Jo blames him for not securing a job for Dean fast enough to avoid the draft. She gives him the gift of an amulet that Sarah had never seen in the house before, that seemingly has no origin or logical explanation for its arrival. Once the amulet is in the man's hands, he gives it to his wife. As soon as she wears it, she burns down the house with her, her husband, and her five children in it. So being a lengthening chain of violence and destruction as the amulet works it way into the hands of other townspeople.

Each time a character is introduced, it's only a matter of time before the amulet is somehow passed into their hands. This provides McDowell the opportunity to detail the person, a little bit of their background, and then he swiftly jumps into their head and explores their new compulsion to murder. The wife of the factory man is irritated with her loud crying children. The beautician is tired of hearing about how much better her friend's boyfriend is. Another wife becomes infuriated with her husband's nightly requests for a glass of water.

The chain of murderers and victims grow longer as Sarah realizes that it's the amulet that is the connection. Unlike in poor examples from the genre, The Amulet's protagonist is not an idiot nor does she make dumb decisions. She figures out the connection logically and then spends the rest of the novel trying to keep the amulet out of people's hands, but she is always a step or two behind.

It builds to a specific climax, one that I didn't quite expect, but once I had read it, it was like the tumblers falling into place. There could be no other ending to this novel once I had reached the end. It is surprising, but also satisfying, as if the ending was meant to be.

There's a scientific principle related to music that's relevant here. Using Adele's Someone Like You, scientists explain why certain songs make us cry. It's all due to what's called an appogiatura. The Wall Street Journal writes:


An appoggiatura is a type of ornamental note that clashes with the melody just enough to create a dissonant sound. "This generates tension in the listener," said Martin Guhn, a psychologist at the University of British Columbia who co-wrote a 2007 study on the subject. "When the notes return to the anticipated melody, the tension resolves, and it feels good."

Chills often descend on listeners at these moments of resolution. When several appoggiaturas occur next to each other in a melody, it generates a cycle of tension and release. This provokes an even stronger reaction, and that is when the tears start to flow.

This is similar to how shocking but satisfying turns of the plot work in genre fiction. Each twist or turn has dissonance. It creates - obviously - tension, due to drama or suspense or what have you. It's tension that causes us to continue reading. Once we reach the appropriate melody, or the logical outcome of the plot, it's all the more satisfying because of the reversal of the tension, of the dissonance. Yes, I just used science to explain why the ending of The Amulet was so good.

However, the Amulet is more than an efficient example of the genre, in which all of the moving parts function together in a precise and engaging way. Many many many critics have pointed to horror fiction's supposed ability to articulate or react to something uncomfortable or unnerving in society. For example, Count Dracula might represent the increased understanding of sexually transmitted diseases or he might represent the new wave of immigration from Eastern Europe into England during the late nineteenth century. Horror fiction, as critics have rightly pointed out, is a space to explore that which frightens us as a society by using exaggerated forms or symbols of that fear-inducing thing.

Like all good exemplifications of the genre, The Amulet seems to say something about the entrenched poverty of the county. The novel posits that one reason why the amulet is able to move from victim to victim is that each time it comes into the hands of someone, it represents to that person a costume. It's becomes a garb that quietly elevates them above their peers. It's a way of separating themselves from the plague of poverty that surrounds everybody and everything. Plus, the word "amulet" is weighted with a richer meaning than "necklace". It automatically connotes something bigger or more meaningful than jewelry. It has a whiff of sacredness.

As the novel tells us, there are no atheists in this town, or at least none that will admit to it. And in true Southern Gothic fashion, everything is imbued with a sense of the spiritual. Any object that connotes spirituality immediately denotes an elevated status. Thus, The Amulet, the novel that is, attempts to express the townspeople's desire to impossibly rise above their miserable lives or hardship and toil.

However, the novel is not reflecting a simple aspiration. The Amulet is horror, not realism. It's reflecting instead, the people's fear of divine or otherworldly retribution due to ill-gotten gains. It is the same fear that pervades every story of the rise and fall of individuals. We gleefully observe as those that have achieved something they don't deserve fall violently back into the mire from which they sprang. Southerners, McDowell seems to imply, are just waiting for those uppity people to get what's coming to them. This idea persists even outside horror.

This is not something particularly unique to McDowell's novel or to horror itself, but again, The Amulet is simply an efficient and spectacular sample of horror in that it accomplishes this seemingly effortlessly.

Is the novel entertaining in addition to provocative? Of course. While McDowell seems to carefully lay the groundwork for his horror, he's also extremely adept at dismantling it. For those that love their horror to be quiet and slow-building, this is a good novel, but for those that enjoy their gore, there's plenty to be had. The pacing is absolutely stellar in that the reader is always being rewarded for their patience with some setpiece right out of their darkest imaginations. I don't want to ruin any of the surprises in this novel save for one: this is one of the rare horror novels where not even babies are safe from the murderous pen of the author.

I knew that I was going to be a McDowell fan for the rest of my life when I saw that he had the huevos to brutally murder an infant in a fairly inventive and shocking way. Anybody who wrote a horror novel back in the 80s weren't quite familiar with splatterpunk or any of the excesses relative to that subgenre. So it's rare to read an 80s horror paperback, a Southern Gothic no less, that indulges in brutal infanticide.

Although, this is again logical. Southern fiction lends itself to the grotesque, and there's practically nothing more grotesque than this particular kill. Lovers of gore would kick themselves if they missed out on The Amulet. It's a spinning exhilarating and evocative journey into the darkest parts of the South, where retributive justice remains - usually - the only source of brutal violence.

McDowell passed away in 1999, and I'm sure that if he had continued to write horror novels set in the South, he would have started to touch upon the problems facing them now - which is to say, what TV's Justified deals with: meth and poverty. Of course, there's nothing stopping another writer from tackling this in a horror novel, but I'm afraid that they probably won't have the talent and professionalism McDowell displays in The Amulet.
Posted by matthew.