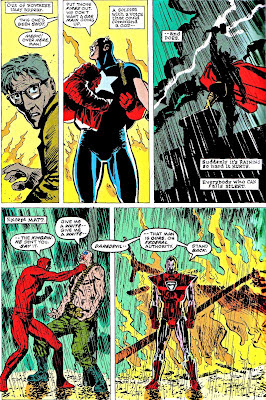 I'm opening this review of Marvel's The Avengers, as it's called, with a page from Frank Miller and David Mazzucchelli's Daredevil story, called "Born Again". It is, without a doubt, my favourite depiction of the Avengers ever. Certainly with only a few pages - no, a few panels, Miller and Mazzucchelli absolutely nail the Avengers' inability to come to grips with the real world. They are gods and man of iron. They're not real people. They're not humans with emotions or attachments. They're above everything, literally.

Joss Whedon's Avengers movie is a lavish expensive well-cast and entertaining work of fiction. That's the short review. That's the best thing I can say about this movie. At first glance, this is probably glowing praise, especially from somebody who picks and picks at things until others would say there is nothing fun left. I wanted to start the review with Miller's depiction of the Avengers as my favourite as a counterpoint to Whedon's breezy fun romp. While I think Whedon's Avengers is an eight year old's dream film, he will grow older and eventually (hopefully) read Miller's Daredevil. It says more about superheroes in one page than Whedon does in two and a half hours of spectacle.

So you can tell I already have problems with Marvel's The Avengers. I hate that it's called that. I hate that it has to be branded so definitively. I presume it's due to the old British television show similarly titled that existed in film version long before Chris Evans was able to hit the gym to build such tantalizing chest muscles.

Of course I have problems with the movie. But let's get the positives out of the way first. I mentioned that it was lavish and well-cast and entertaining. These are not half-truths or half-measures of praise. I truly mean it. It's a spectacle. But this - this I will get to in a moment. It's certainly well-cast, especially Mark Ruffalo as Bruce Banner, the third Banner in a decade. He portrays the scientist-cum-monster as a wounded animal, constantly holding back the pain that is the Hulk. Other impressive members of the cast include Jeremy Renner, criminally underused, but then again, they all are. The movie's not long enough for all of these A-list actors. Chris Evans provides some meaty gravitas as Captain America, but he's not quite authoritative enough. He's unsure of himself in the world, but that might be due to his boyish good looks and soft Midwestern voice. Robert Downey Jr is - as always - a delight to behold. I wish he was in every movie, frankly. The list goes on. All of the cast are well chosen and perform admirably, considering they were no doubt in front of a huge green screen for most of the filming. The guy who plays Thor, that giant bulk of a man, whoever he is, well he looks good. That's about all I can say about that guy.

I also said it was entertaining. I was entertained. For two and a half hours, I was transported to an alternate Earth where superpowered folk are able to destroy copious amounts of prime New York real estate without too much blood. What blood there is, is sparse and brightly coloured. Not the brown grit of dirt smeared all over like on real soldiers' faces, but comic book red. One of the primary colours. 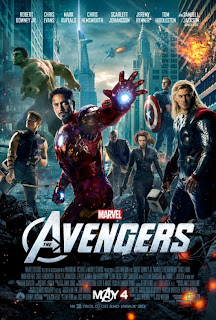 Look at this poster. It looks Photoshop'd. It looks fake. The whole movie has this feel of bright cartooniness, like they all stepped out of the garish comic book world. Chris Evans earnestly and without irony dons the star-spangled garb of Captain America and someone earnestly tells him that with all the darkness in the world, people need something old-fashioned. This same person dies believing in the idea of a team, of cooperation, of joining forces and overcoming differences in order to defeat a common enemy. This villain has but one motive, of course, to enslave and destroy freedom.

In the climax of the movie, Whedon's camera lingers on the panicked faces of New Yorkers as flying objects from the sky pulverize buildings. Debris and dirt and ash linger in the air as citizens, human beings, cower in fear as gods and men of iron clash high in the air. It's not hard to point to Marvel's The Avengers as a post-9/11 movie. It's also not hard to point to every fucking movie as a comment or rather observation on 9/11.

Because this is the problem, this is what I've been building to. While The Avengers is an entertaining fiction, it's ultimately that, and nothing more. It's always an observation of superheroics rather than a comment or an exploration of what it means to be a god or a man of metal.

This is surely intentional. Whedon's movie is an efficient, by the numbers but effective comic book movie that uses the colour palette of its source material to steer its design and its moral message at the heart of the film. There's no gray area in regards to enslavement or the total annihilation of freedom and thus there's no spectrum of colour in Marvel's The Avengers. The good guys are bright, the bad guys are dark. That is the equation.

But this leaves me wanting more, and surely, it leaves other people wanting more, judging by the excitement developed by Nolan's The Dark Knight Rises. It's almost unfair for both Whedon's film and Nolan's upcoming Batman story because I'm going to ultimately compare them both to my standard of comic book movie: 2008's The Dark Knight.

Where The Avengers is an observation on heroism and comic books, The Dark Knight is an exploration, a study in the themes relating to the symbiotic nature of heroes and villains. The Dark Knight looks to Batman, Harvey Dent and the Joker as a complicated triangle of need. They are on a spectrum of heroics and motivation. Each one is dynamic and changing under scrutiny and under each other's manipulations. Nolan's film explores, plays with, takes apart and puts back together a definition of heroism in the face of inscrutable terrorism. Whether or not The Dark Knight's success matches its ambitions is irrelevant. The fact that is has ambition is germane to Marvel's The Avengers.

Captain America, Ironman, Thor, the Hulk, Hawkeye and for some insane reason Black Widow band together, bond and join forces in order to defeat a villain's who's primary plan seems to consist of one step: sit on the throne. Both Heath Ledger's Joker and Tom Hiddleston's Loki engage in a specific type of terrorism that's particularly affected by 9/11. However, the pertinent question to ask is complicated. The outcome of terrorism is to create terror. What causes the most terror? The unknown. What is more terrifying than not knowing the motive behind the act of terrorism, or at least, not understanding it. Loki helpfully informs a group of Germans, and by proxy, the audience, that humans are designed to kneel, that freedom causes them to act foolishly. Heath Ledger's Joker, instead, tells the audience that he is a dog chasing after cars. It's worlds more terrifying. The Joker is more scary because he is detached from the world. Loki isn't scary at all because, even though he's a god, he's paradoxically more human thanks to his small goals. He's even called a puny god by a character in the film.

That's where Marvel's The Avengers ultimately gets the Avengers wrong. Instead of exploring what it means to be a superhero in the face of a post-9/11 world, or at least, a god hovering over the sea of humanity, the movie presents us with all-too human characters with foibles, with emotions, bickering stubborn small-minded humans but who have great power. Only Spider-Man can bridge this gulf, but that is due to his character and his location of being close to the street. Thor is not a street-level character. He's a god. That's why it's so disheartening to see the movie offer him as more than human, but still a person at heart.

This is due to the fact that the movie is - after all - a movie. It's a piece of entertaining fiction, and it operates with the language and the logic of a film. Just like other conventional superhero movies, things are set up and then pay off, such as somebody saying "Hulk smash" or when Captain America accuses Iron Man of being the last person to ever make a sacrifice, the audience knows that choice will be presented to him, and he will make the right choice.

In screenplay jargon, there are things called "beats". Beats are rhythmic pulses that the screenplay hits in order to satisfy the audience and the logic of the story. Beats are inevitably predictable once you've seen a number of conventional films. There's nothing wrong with this type of determinism. Audiences like stories to be tight and self-contained. However, stories are diseases that spread, and they need people like Joss Whedon to efficiently and effectively make sure the screenplay doesn't scatter itself all over. Marvel's The Avengers is extremely adept at hitting beats in a logical and consistent manner. We know Iron Man will be offered the opportunity to sacrifice himself just like we know that Batman and the Joker will end up in a confrontation.

However, just like how Marvel's The Avengers is an observation and The Dark Knight is an interrogation, Iron Man makes the right choice but Christian Bale's Batman makes a choice. The ending of The Dark Knight is predictable only if you understand the logic of the story that Nolan is telling. The ending of Marvel's The Avengers is predictable because you've seen a movie before.

Again, this is intentional, and many of you will disagree with me that this film suffers from its adherence to conventional storytelling, or that I'm being unfair in comparing this film to one starring Batman. My mother always complains that I read too much into things. "Why can't you just enjoy things for what they are?" I can. And I did. I was entertained by Marvel's The Avengers. I was transported by the fiction for two and a half hours. Some would say this qualifies the film as a success.

But this movie doesn't exist in a vacuum. It exists in a world where superhero movies can do and say more than they ever could before. X-Men 2, Spider-Man 2, The Dark Knight, Watchmen, Super, and probably The Dark Knight Rises are not just movies, but interrogations. They explore what being a comic book character means. They understand that superheroes are not just humans but gods as well. Being gods, they should stand above, separate from the world, gazing down. They should accomplish things and acts in inscrutable ways because they are gods.

The Avengers fails for me because there is something to be said about superheroes that this movie is too shy to say. It's too interested in loud noises and big spectacle. This isn't a bad thing, but I guess I'm tired of fast food and ache for the five star experience, one that entertains and interrogates.