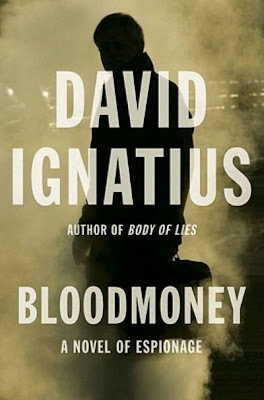 Somebody has been organizing the assassinations of covert CIA agents across the globe, all of whom are on secret missions not publicly authorized by Congress to bribe select Pakistanis in various levels of power. Sophie Marx, a CIA operative working outside of the house in a secret lateral organization, is tasked with figuring out how the agents' legends had been compromised. Evidence seems to point to a link in the financial world, increasingly made globalized in the wake of 9/11. Marx goes off the grid to London and Pakistan in order to solve the mystery and figure out the next target before it is too late.

My synopsis of this novel makes Blood Money sounds like a regular thriller, the kind of fiction one picks up at the airport before a long flight, the kind of fiction one reads around the pool or the beach in order to achieve maximum relaxation. It doesn't sound like the kind of fiction that unnerves the reader, or forces them to think critically about the world of espionage beyond the usual cliches of James Bond or Jason Bourne. David Ignatius, author of Body of Lies (made into a disappointing Ridley Scott film), is an expert in real world situation, and he totally eschews the generic conventions of the spy novel in favour of scaring the pants off the reader with fiction more thrilling for its nefarious and shadowy implications than for the machinations of the plot.

Ignatius is a journalist, a respected and lauded columnist for the Washington Post. He was raised in Washington, and his column reflects that upbringing, with a focus on political entities such as the Justice Department and the CIA. All of which he has used for his novels, lending his fiction an unmistakable sense of realism. On the surface, Blood Money reveals Ignatius' background as a journalist, with its terse jargon-filled dialogue, and sparse character moments. Ignatius fills in the lines of his cast with slight details, as journalists do when trying to find the human element in a story. Ignatius is concise and wastes little narrative time with environmental description or asides. Instead, there is an almost cold-blooded focus on the facts of the matter.

In 2002, the Treasury Department and the Counterterrorism Center worked together to formulate a system to track the funds of terrorists. Patterns and systems were analyzed by great banks of computers and processed until patterns were identified. This system was applied to the global financial market and subsequently was used to predict and/or track the financial movements of terrorists. Blood Money, Ignatius' 2011 novel, takes this to the next logical step. What happens when the technology that allows for this analysis becomes pervasive enough for the terrorists to have access? What happens when the very targets this system was designed for get their hands on it?

It's no spoiler to reveal that the government in the novel is similar to the government in real life. That is to say that the institutions that protect our freedom and way of life are doing so through extremely scary means, including financing terrorist cells and bribing the very same enemies the government swore to eradicate. The Global War on Terror is far more complicated than simply using Predator drones to destroy training camps and in one costly (and very real) case, a factory for veterinary medicine. The shadowy world of espionage was exposed to the light, and the common people realized that the world is more complicated than the movies show us. The reality is that Blood Money is not only realistic but entirely probable. In terms of pure shock, Blood Money is on the same level as LeCarre's The Spy Who Came in From the Cold, but lacking the deft hand and gorgeous prose.

Globalization is a real and unavoidable thing. The inevitable outcome of the Soviets in Afghanistan, the dominance of neoliberalism, the West's inability to understand Islam, and the sheer complexity and variety of the people have caused the Middle East to enter the global spotlight in a way that has never happened before. Ignatius' novel capitalizes on the total lack of awareness the regular joes of the world have of the Global War on Terror, if indeed this falls under that category.

The CIA allows for a covert organization without approval from Congress. The funding for the hidden cell comes from skillful manipulation of a hedge fund based in London where insider trading allows for a mutually beneficial relationship. The money, illegally obtained, is used to persuade and collude with high ranking and valuable assets in Pakistan in order to protect the interests of the United States. Not only does this sound possible, but it sounds... inevitable.

The true Global War on Terror is not fought with Predator drones or massive armies marching across the desert, but in cyberspace, on the Internet, and mixed up with the global economy. Blood Money is thus far more effective in sustaining a narrative than other spy novels because it's real and it's fucking scary. The sheer fact that this could happen is what makes me want to read this. It's rewarding to read something so clearly inspired by real events.

When the second agent is murdered, a terrorist organization releases a statement taking responsibility and outing the murdered man as an operative for the US government. The CIA quickly releases a statement denying the link and provides records proving that the man had no links to the agency. The White House laterally releases a statement calling the accusation of covert operations in Pakistani territory as absurd. The effect is to distance themselves from the reality that a cell within the CIA has been operating outside the law and the Justice Department. Because Ignatius tells it so realistically, it's believable that the government would deny everything, and thus, in the real world, when they do deny something, I'm more inclined to wonder about the reality of the situation.

When Russian sleeper agents were exposed a few years ago, many people criticized the already beleaguered CIA for failing to capture or at least be aware of cells within the USA. Any astute and shrew reader of good espionage fiction and nonfiction will tell you that the CIA and the FBI were probably already aware, but didn't want to take action for fear of revealing a greater asset or a greater tactical advantage. Not only that, but the darkest implication of all, not really explored by the mainstream media, is that the public has no idea how many operations are currently happening on American soil and how many sleeper agents from various countries are waiting within American borders for orders.

Ignatius' novel totally exploits that dark implication of the modern world. Fiction is scary, but the real world is even scarier. This is an excellent novel for doing what all good art should do: react to and reflect the world. Blood Money is similar to The Wire in this respect, but at least The Wire's exposure of the unfairness of the system is altogether in the public eye. Blood Money's exploration of the covert operations happening across the globe is more unnerving because there is little confirmation and when there is, one cannot even take at face value what the trusted institutions say. It is utterly crass to say this, but 9/11 represents one of the greatest boons to the espionage genre for offering a scarier reality than the Cold War. The world has irrevocably changed since 9/11, and Ignatius' novel masterfully explores this new world.
Posted by matthew.