There But For The 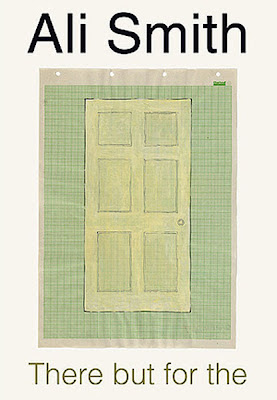 What would happen if you did just shut a door and stop speaking? Hour after hour after hour of no words. Would you speak to yourself? Would you lose language altogether? Or would words mean more, would they start to mean in every direction,all somersault and assault, like a thuggery of fireworks? Would they proliferate, like untended plantlife? Would the inside of your head overgrow with every word that has ever come into it, every word that has ever silently taken seed or fallen dormant? Would your own silence make other things noisier? Would all the things you'd ever forgotten, all layered there inside you, come bouldering up and avalanche you?

This is a long excerpt, but one that perfectly captures Ali Smith's interest - no, obsession with words.

There But For The is about a guest who gets up from a dinner party and locks himself in the spare bedroom for months. Each of the four sections, titled after one of the four words of the title, focuses on a peripheral character to the action. The first section charts Anna, who knew the guest, Miles, briefly when she was seventeen. The second section is Mark, the man who randomly met Miles and brought him to the dinner party. Next is Mrs. Young, a woman in a nursing home who chooses not to speak, and finally, Brooke, the hyper-precocious daughter of neighbours. Miles' self imprisonment or self-exile or self-liberation, affects the four in different ways, and each section explores that alteration to the everyday.

There's a parallel to Ali Smith's other novel that I have read, The Accidental, which I felt was utterly brilliant. In the latter, a small family is torn asunder by the arrival of a young Scottish woman. In both novels, the introduction of the foreign element allows for the focal characters to think about time, narration, life, family, and especially language. Ali Smith strikes me as the type of person who just can't stop playing with words, fiddling with them, poking at them, turning them over and over until they're hardly recognizable.

Each of the sympathetic characters in the novel are obsessed with puns. The jokes and wordplay is endless in There But For The. Each section plays around with the eponymous word. Characters trade irritatingly clever puns at a ludicrous speed, such as Miles referring to a group of lawyers as "nasty, British, and sharp". Or Brooke being called Mount Cleverest. While a reader such as myself takes utter delight in the puns, other readers might find themselves wondering what the interest in wordplay is about. As aforementioned, I suspect it's compulsion. Each of the characters who make these jokes are doing so compulsively, perhaps to mask the pain or emptiness inside. Or maybe, as the novel tentatively and opaquely suggests, the puns are a way to communicate, to connect with sympathetic people.

Language is, inevitably, a way to communicate. As Mrs Young deftly observes, the younger generation's compulsion to be constantly connected to the sphere of knowledge, via texting and smartphones, means a withdrawal from immediate conversation. During the dinner party, which Smith conveys in excruciating detail, someone quotes the beginning of Jabberwocky: "`Twas brillig, and the slithy toves" while another replies, "Did google and twitter". The joke here is that one of the less sympathetic characters observes that Carroll was brilliant for coming up with these words long before the Internet existed.

As language becomes an increasing barrier between people in the know and those that aren't, the ones in on the joke trade their puns as a secret language, as a code existing on the surface of language that simultaneously overturns meaning, because, after all, that's what a pun is.

The novel explores another mode of communication that exists side by side with language, which is music. Smith establishes a connection with Joyce by exploring old musicals and pop standards, what they mean and what they say and where they come from. Each of the songs being detailed, through expository dialogue at the dinner party, reflects the songwriters' desire to communicate something essential or primal but without the means of regular language. There's a disconnect between the song and the meaning, the novel questions. Only those present really understand and we are all simply getting the joke long after it's been told. Or as one character quotes Warhol, the repetition of the song dulls the meaning until we are compulsively listening to it, aching to understand. Or as Brooke observes, jokes told again are never as funny as the first time.

Obviously, there is more to the novel than jokes being told. Some of the jokes convey the themes in an opaque manner. The first section's virtuoso (virtue so-so) vivisection of the word "there" asks the reader to question what it means to be "there". Is Miles all there? Of course he is, he's in the spare bedroom, all of him. But is he all there... in the head? What does there mean? Smith takes up the same compulsion with puns but with something more serious in mind. Can you be there and simultaneously be not there? Is it possible to be present and absent synchronously? What happens to those who are there when you are not there?

There But For The is an interruption. In the usual way of deploying that phrase, it's an interruption. There but for the grace of God. It would have been if it hadn't been for: this phrase even demonstrates the tension Smith's novel explores so beautifully. And it is beautiful.

Anna's section, with its flashback to the age of seventeen, is utterly tender for its small moments. Anna and Miles meet on a trip to the continent, after they and forty eight others had won the trip for composing an essay. Miles, ever focused on the elasticity of words, begins his essay thus: "There was once, and there was only once. Once was all there was." He makes a small joke about her punk shirt, quickly falling out of fashion, and he observes that if her last name was "Key" she would be "Anna Key in the UK". It's these small moments where the novel goes from being good to excellent.

Brooke, who is adept at wordplay and being clever, has brief but intense moments of anxiety when she remembers that school is about to begin again, and she is the only one like her, she is the only Brooke. She is THE Brooke. Nobody in her class understands her, not even her teacher who berates her for her cleverness.

Mark looks at online pornography for a moment, but then feels crushing loneliness so he googles, literally, "something beautiful" but never feels completely at ease. He visits the Observatory during election season ("observe-a-Tory") and looks through a Camera Obscura.

Mrs Young remembers being in a crowded theatre, howling along with a warbling film actress, and then making eye contact with the man who would eventually become her husband. Her connection with Miles ("Miles before I go to sleep" is the name of a monologue performed by an irritating character outside the house) is left mysterious, even after the novel's conclusion, but there are hints, hints of a portentous relationship between her dead daughter and a younger Miles. In the spirit of the novel, during the years that Miles comes to visit, Mrs Young is unable to say something of value or anything to Miles. He simply shows up and visits.

There But For The absolutely shines during the small moments, and just as the titles of the four sections add up to a novel, the moments cascade into a brilliant aesthetic experience. I can totally understand people not "getting" Smith and her compulsion to wordplay, but for me, this was a captivating read. I loved this novel during and after the reading. While maybe not as emotionally satisfying as The Accidental, this is still a harrowing and illuminating experience.
Posted by matthew.