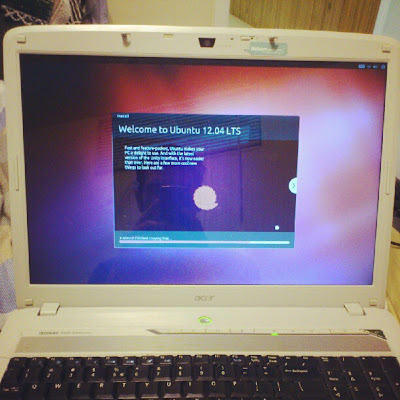 I've switched my shitty laptop from Windows Vista to Ubuntu 12.04. It's quite a change, but I'm slowly getting used to it. Certainly things run a bit smoother and a bit faster. The graphics are an improvement. But, I'm finding having to learn scripting for a terminal to be tedious. It's always a disconnect when I realize a program I like isn't one I can use anymore. Still, it's better than fucking Windows.

Reading has slowed down considerably, but to be fair, I'm reading a lot of non-fiction at the moment. I find myself incredibly interested in spies and the global stage. That's all I'm going to say about that.

I'm writing a screenplay. Slowly. But there is progress. I've mapped out most of the thing, and now it's just a matter of sitting down and getting it all out.

I'm re-watching Six Feet Under for the first time since it aired. The show hasn't aged and holds up remarkably well. I'm almost finished the fourth (of five) seasons, so I will write something up when I'm done, I hope.

I find myself both excited for and depressed by school. It's a lot of work, and it's not helping my social life, it appears. The future looms darkly on the horizon like a gathering storm. There's so much to do before I can work, before I can stabilize my life, and that distance fills me with dread. Life is never going to be easy for me. Never again, that is. However, life isn't hard in the sense that I can't afford to eat, so I suppose I should shut up about such a thing.

I haven't been writing for the blog because I am tired and I don't feel like reviewing everything anymore. Perhaps I'll get another surge of exhilaration and write long reviews of everything I touch.

Exercise and diet have taken a nosedive. I'm no longer interested in running or working out. I'm still eating decently, so that's keeping off the pounds, but I'm not eating well. Hopefully in a few months, when I decide to do another update, this will have turned around.

Ultimately, the mood of this update is one of emptiness, lethargy and depression, but not depression as a clinical diagnosis. Maybe a better phrase would be deflation. I feel deflated. I will monitor this behaviour for any further signs of clinical depression.
Posted by matthew.