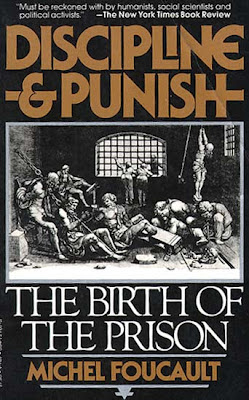 I haven't had the energy to write anything substantial as nothing has really piqued my interest enough. However, I have a brief thought to share.

I'm currently halfway through Michel Foucault's Discipline and Punish, and of course, I'm loving it. I read a bit of his stuff earlier in 2011 and wrote a paper about the Department of Homeland Security's use of the panopticon. What attracts me to Foucault is that once you read his basic stuff, you tend to frame the world his way. I look at institutions and discourses in a Foucauldian way.

I wonder if Foucault was ever aware of this irony. If knowing is power, the logical outcome is that I would have power over Foucault's writing because I understand it and can execute it. However, there's a more subtle and probably more real effect here. Now that I understand Foucault's discourse, I am part of his very discourse. He has shaped and altered my thinking well enough to have exercised power over my intellectual body. If everything I read, I put into Foucauldian terms, then truly, Foucauldian discourse has fully absorbed me and indoctrinated me.

Anyway, Discipline and Punish is an amazing read. I'm just getting to the good stuff now. Certainly, I'm already thinking about a paper on Batman, his use of terror, and Foucault.
Posted by matthew.