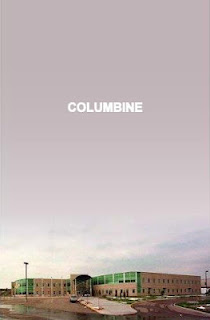 Sometimes it's unnerving to read a history of something you lived through. Even more unnerving is when the principle characters in the history are roughly the same age as you. And when they're the same socioeconomic class, race and gender as you. Dylan Klebold and Eric Harris and I share superficial aspects such as the aforementioned things. However, where we differ greatly is that I have never murdered anybody and I have obviously not committed suicide by putting a shotgun into my mouth. This doesn't make reading Columbine by Dave Cullen any less disturbing and heartbreaking.

Cullen's history of the Columbine massacre has a specific structure, with alternating chapters of "before" and "after". The pre-massacre chapters are heavily focused on trying to understand Harris and Klebold using their website postings, videos, journals, friends, family and official records. Cullen painstakingly documents and charts their every move and every thought if it's been recorded. Harris and Klebold are absolutely perfect subjects for a journalism project in that they self-documented to an unbelievable degree.

The "after" chapters follow the survivors, the parents of the killers, the lawsuits, the crass attempts at monetizing the tragedy, the principal of the school, an investigator from the FBI whose son was enrolled at the school at the time, and a whole host of other people. If the before chapters are meant to understand the killers and their motives, then the after chapters are a celebration of life in the face of extreme trauma and adversity. At times utterly heartbreaking, such as the public suicide of a mother of a victim or Patrick Ireland's first time water skiing after being shot in the head.

Cullen doesn't shy away from using emotional moments to incite the reader to feel something. There doesn't seem to be any self-awareness or guilt when the author deploys emotional manipulation. This lack of shame in Cullen's Columbine speaks to the sheer shallowness of the thesis of the book.

When reading any work of journalism, there is going to be bias and subjectivity, despite any and all efforts at objectivity. It's just a fact of journalism. However, the journalist can strive for the maximum level of equality and evenness. Cullen does not. The agenda is crystal clear almost from the beginning of Columbine. This is a work of journalism to dispel myths about the massacre and return the tragedy from the hands of the media into the hands of the ones affected.

The media does not emerge pristine from Cullen's history. They are presented as opportunistic, unfeeling, and hungry for more salacious and volatile information, even if it's conjecture or even outright falsehoods. During the actual massacre, some kids were unable to connect with 911 using their cellphones, and they ended up calling the media. Some outlets were smart enough to tell kids to get off their phone as the killers, whomever they might be, could be watching the news and thus receiving valuable information about locations of possible victims and movements/tactics of the police. Other media outlets did not think of this angle and it was left to the various law enforcement agencies to demand that the media get their noses out of the story until it was over.

Later, the media is presented as being driven by economic concerns rather than altruistic motives or journalism ethics. Any tenuous connection between the story and outside influences was repeated ad nauseum, such as the Trenchcoat Mafia, video games, Goth music and even bowling (as per the Michael Moore documentary's erroneous assertion that the killer went bowling before the massacre).

This is why Cullen's agenda is so obvious (dispelling myths) and also confusing. Cullen deploys a disconnecting tactic early in the book's introduction to separate himself from the rest of the story. He claims that instead of forcing himself into the story, he groups himself in with the media. This allows Cullen to presumably stand above the entire history and report on it in its totality. What this actually does is allow Cullen to escape culpability in his treatment of the media. By excoriating the media and not allowing himself to be a part of the story, Cullen distances himself from the media - despite asserting he is part of the media.

The effect is that Cullen's sensitive and emotional treatment of the history is privileged over the media's crass and shameless monetizing of the story. Thus, I'm not entirely convinced that Cullen's Columbine is an effective piece of journalism. While it's admirable that Cullen is adhering to standards of journalism by increasing objectivity and minimizing authorial bias, the entire picture does not emerge. Cullen claims that his coverage of the tragedy begins half an hour after the boys started shooting and that the coverage continues for the next ten years. It's implied that Cullen has been working on this continuously for ten years (despite the book's chronology effectively ending in 2006-7).

A more complete picture would include Cullen's story and why he was successful in his penetration of the community over the other elements of the media that end up looking like asses in Cullen's book. He excoriates any and all members of the media that indulged in rumour, theory and conjecture when the full picture wasn't available. He grasps at forgiveness when admitting that so many "witnesses" were providing conflicting information. But this is overturned when Cullen notes that much of the information the witnesses were circulating were fed to them inadvertently by the media, the very institution designed to minimize rumour and conjecture.

Why was Cullen so privileged over other journalists? Why did the Klebolds talk to Cullen over the other thousands of media figures? What made Cullen the man to write this book? Was it his sensitive and emotionally manipulative approach to the facts?

This sounds like a rather small criticism of the book, but I'm focusing on it because Cullen's book is beginning to be regarded as one of the finest works of journalism ever. It's being taught in high schools and in classes on journalism. It's being held in a higher esteem than I think it deserves.

Part of its inflated reputation is due to the very subject matter. Any "balanced" and "nuanced" investigation of such an iconic and influential moment in history would be received in hushed tones for fear of upsetting the particular status quo. To paraphrase Noam Chomsky and Edward S Herman, the affected students, faculty and parents of the tragedy are "worthy victims". They are mostly white, affluent (or upper middle class) and in middle America. They are religious, seemingly without controversy and thus undeserving of the tragedy that befell them.

As long as Cullen didn't write an apologia for Harris and Klebold, this book would have been well received. It plays into a particular discourse of reverence for the past. Plus, the inscrutability of the killers themselves, the conflicting theories on their motives, add to the discourse. Only the Columbine shooting, not even close to the first school shooting of the 1990s, would garner an entire history unlike the Virginia Tech massacre (which had a higher body count).

Thus, the book was already destined to be well-received and its journalistic shortcomings ignored or forgiven due to the sensitive approach to the subject matter. Only a few people come out looking like idiots in Cullen's history of the many many many institutional failings after the tragedy. Law enforcement cover-ups, crass aspirations to monetizing the tragedy, and even the religious right exploiting the tragedy for their nefarious means are all handled in an even way. Thus, even the stupidest most ignorant people of Littleton, Colorado are treated with the same sensitive hand, despite Cullen's obvious agenda.

There's a paradox in Cullen being explicit with his agenda (dispelling myths and excoriating the media for their complicity in the exchange of rumour) and then avoiding pronouncing judgments on other institutions. Why does Cullen complain about the media but not about Misty Bernall's book She Said Yes: The Unlikely Martyrdom of Cassie Bernall which propagates a fiction in the service of religion?

Cullen's Columbine is still a riveting and well-researched read. His approach to explaining the boys and their motives is a masterwork of interdisciplinary scholarship. He draws on copious amounts of research to explain, in laymen's terms, how two seemingly average boys could go about committing such acts. It's all laid out in a logical and systematic manner. Each recorded movement allows Cullen to connect the dots.

The pre-shooting parts of the book are the more successful parts of the book in terms of journalism, but the "after" chapters are more fascinating for their inspirational tone and their portrayal of victims and survivors coming to terms. It's hard not to get swept up in Patrick Ireland's struggle to walk, talk and lead a normal life. You cheer when he speaks at a Columbine memorial, defiantly telling the crowd that the shooting didn't create his identity. He's more than a victim. This is surely Cullen's other motive in writing this book: taking the tragedy from the media and giving it back to the victims. Unfortunately, Cullen is still part of the media, and this book's crude release date (purposefully timed to coincide with the 10 year anniversary) means that this is not entirely successful.
Posted by matthew.