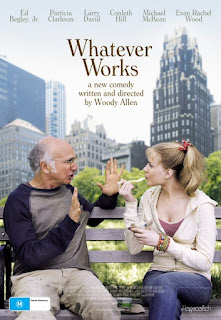 Every time I watch a Woody Allen film, I remark (aloud in typical Allen style) that I love Woody Allen. Then I forget about him and his films and then coast along, usually for a year or two before I end up inevitably watching another one and repeating the cycle. Whatever Works is a film that when it came out was not terribly well received. Despite this, I decided to watch it based on my residual goodwill for both Larry David and Evan Rachel Wood. Say what you will about Woody Allen; at least the man can cast.

It's a rather small romantic comedy in his usual vein, and there isn't a lot to recommend outside of that. If you enjoy loquacious intelligent characters who still make bad decisions and fall in and out of love while engaging in witty banter, then you'll enjoy this film. Larry David plays a misanthropic genius who ends up married to a Southern belle of less than considerable intelligence. They make it work until his pessimism and her optimism force them apart in true entropic fashion.

Along the way, Wood's mother (Patricia Clarkson) shows up, loses her "red state" shell and becomes an avant garde artist living simultaneously with two men, one of which is Larry David's good friend. Ed Begley Jr plays Wood's father and he shows up and realizes in a rather funny scene that he might actually be gay (a two minute scene leads to a predictable but hilarious punchline).

In the end, Larry David tells the audience directly that they should filch or provide whatever happiness they can find because life is short and cruel. Nothing matters so why not be happy while it happens. He tells them to find happiness in whatever works.

I'm not really going to delve too far into this film and its musings on quantum physics (Allen uses Wood's simpleton character to mangle some of the scientific concepts but it's all in service of the themes of the film) or into the metafiction aspects or even the bizarre Larry David as Woody Allen angle. I just want to say that I enjoyed this film. I thought it was charming, funny, tender in moments, and offered a reasonably good time for 90 something minutes.

Perhaps the reason why the film wasn't so well received at the time is because it's so standard. It's a romantic comedy that Allen has made time and again. There's nothing particularly modern about the film (even the typeface used for the credit evokes an earlier film aesthetic) or about the screenplay, which as it turns out is an old one Allen never used. However, the film, if existing in a vacuum, would entertain. I was entertained. Sometimes that's all you need from a film. Allen manages to create an emotional connection between the film and myself and for that reason, Whatever Works succeeds.

Apologies if this wasn't the 2,500 word return to form you were hoping for. I'm tired and reading mostly nonfiction so there isn't a lot I can review.
Posted by matthew.