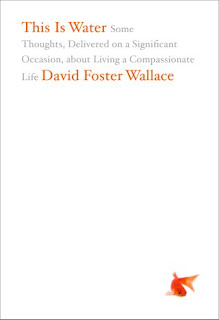 In light of recent remarks made by one Bret Easton Ellis, it's interesting to read something from Wallace so absolutely selfless. That is to say, that it's interesting that Wallace, so often characterized as being hyperintelligent and so logical, offers a rather critical view of himself and his own line of thinking. Wallace, as everybody knows, committed suicide for a variety of reasons, but mostly because of the inescapability of depression, the cyclical nature of meds, emotional highs and lows.

In This is Water, Wallace posits that higher education merely offers the student to ability to choose between frames of reference. You can either see life after college as a rat race, constantly gnawing on you, the tedious back and forth of everyday living, or you can see individual experiences through a prism of various perspectives in order to, not avoid, but understand the vast complexity of the world. This, to me, encapsulates Wallace's approach to life. It makes sense in context of Wallace's background in philosophy (Wittgenstein and the effects of language-games) as well as his humanistic approach to his own characters.

I'm reminded mostly of Wallace's best story in his collection Oblivion. In "Good Old Neon" the narrator tells his therapist that he's a fraud and that everything he says is a lie. The story, in typical Wallace fashion, follows every logical outcome of such a premise. What makes the story so much more interesting and evocative is that the end posits that it's simply Wallace himself imagining why a former acquaintance would commit suicide. It's a short story about trying to understand the motives of somebody else. Wallace is the best kind of philosopher in that he frames his navel-gazing in the context of trying to understand humans. He uses his vast intellect to comprehend what is fundamentally incomprehensible.

Thus, This is Water is so utterly heartbreaking because of Wallace's suicide as well as for the content of the work. Even reading it without the knowledge of Wallace's suicide would make this short work quite emotional. Wallace uses language in way that's never theatrical or ponderous, but simply efficient in communicating the complexity of his ideas, which are all about trying to view the world through the aforementioned prism. This is Water is a rare and singular work in that it manages to be both truthful and didactic without stooping to pithy aphorisms. However, it is not singular in relation to Wallace's oeuvre; it comes to represent a man's beliefs but not in his totality, as he argues so eloquently.
Posted by matthew.