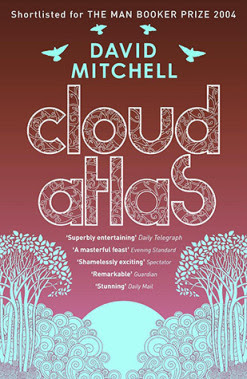 It's hard not to be reminded of Fredric Jameson's assertion that one of the constituent elements of postmodernism is the pastiche when reading David Mitchell's feted novel Cloud Atlas. There is nothing new within the cultural logic so the present must look to the past. The structure of Cloud Atlas is intensely specific: six nested narratives that use specific literary forms. The novel starts with the earliest text, chronologically speaking, and then moves forward in time until the sixth story, which is set in the distant future. Then, the novel works backwards, picking up each abandoned story with the end of each one finding and reading the text of the next, going backwards in time.

Many of the paroxysms of praise lavished upon the feet of the author focus on the versatility of the prose. Mitchell is deft at mimicking the specific literary voice he's attempting, be it the 19th century slave narrative, the 1970s political thriller, or the dystopian cyberpunk voice. The central story, the one set in the distant future, is written in the form of oral literature with a difficult to read language that feels like the logical outcome of centuries of evolution on English.

The central story puts forth the climax and theme of the novel and then Mitchell spends another two hundred pages providing a cascade of climaxes and intertextual references in order to connect more strongly the characters. The central idea is that each story is not only a nested narrative, but the same cast of characters reincarnated. This is almost made explicit in the central narrative, when the future goat herder of no education is introduced to an ancient relic in the form of Siddhartha.

Mitchell connects this idea with other literary tricks such as the recurrence of the number 6 and the echoes of certain names and concepts. For example, in my favourite section, set in the 1930s, a young composer gets hired as the assistant to an almost forgotten composer of critical acclaim. During breaks, the young assistant composes a Cloud Atlas Sextet in which solos of different instruments are nested within and without. Each instrument is playing a different solo, but at the heart, it's all the same.

Unfortunately, all of the cleverness and literary chameleon act does not disguise that the constituent parts of the novel are wildly uneven and somewhat weak. It's an anthology book, and in true anthology fashion, there are weak parts and strong parts. The central narrative, with its irritating linguistics is far too long to sustain its idea. The section set in the 21st century features an aging publisher tricked into an old folks' home and subsequent escape. It's particularly weak in light of being sandwiched between stronger sections.

As a whole, the novel is engaging, but on the microcosmic level, it's frustratingly uneven. Perhaps the effort didn't match the ambition of the premise. Certainly the connections between narratives are somewhat tenuous to the point that the reader would not feel mistaken in thinking this a collection of short stories with a bizarre structure. If the characters are indeed reincarnations, why then the character commenting that this isn't feasible or even logical? Why then have characters comment on the authenticity of previous narratives? Why present the narratives as fictional within following sections? If each narrative is a fictional device, then is the central narrative the only true one? But that's not possible as the end of the central section implies that it's only a story.

But this doesn't make the novel a failure. Far from it. It's compulsively readable due to Mitchell's seemingly effortless prose, as well as some trickier aspects of the novel. The outside sections change in language as it moves closer to the center, which is a particularly well done effort.

As well, despite sections being geographically and chronologically distant, there's a political strain running throughout, something quite critical of capitalism and the dehumanizing process of commodification that becomes explicit in the dystopian section near the center. Instead of a democracy or a totalitarian government, the world is run by a "corpocracy" in which the law states consumers must spend a specific amount of money every month, in which clones are created to serve, in which nouns have been replaced by recognizable trademarks to the point that "cameras" have become "nikons", etc. But this anti-capitalist fervour is not contained in only this section. In fact, there are echoes of it in every section. In the central narrative, in which the themes are explicitly laid out, the Fall of mankind is not due to external factors but due to the hunger inherent in consumption and production. Nothing was ever enough, so mankind consumed everything to point of destruction.

The subtlety of the political ideology in the novel is quite a success as a linking device as well as a structuring device. More so than the reincarnation bit, but this might be a case of confirmation bias in your humble reviewer.

Despite my qualms that the individual elements don't necessarily work, the sum is greater than the parts. On the whole, I quite enjoyed the novel, so much that I read it in less than 24 hours. It's a transcendental work both in the sense of its themes and its ability to rise above the relative strengths and weaknesses of the constituent elements.
Posted by matthew.