In the Skin of a Lion 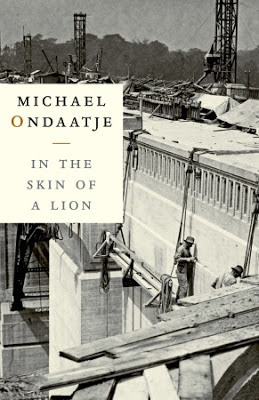 The fastest way to describe my dislike for Ondaatje's style is that every sentence seems overwritten. However, I am going to unpack why I hate this novel so much and why I revolt at his silly ostentatious style. Ondaatje's sentences call attention to themselves by focusing on incongruous details or by framing those details in bizarre ways. It is this over-attentiveness that - for me as a reader - I find most distracting. In his book, How Fiction Works, James Wood writes of detail that "Nabokov's fiction is always becoming propaganda on behalf of good noticing, hence on behalf of itself". Wood goes on to write of insignificant detail that is significant in its significance and lazily asserts that modern fiction is focused on the abundance of detail. It accumulates like barnacles on a ship, concatenating for the reader an effect of realism. In his novel, In the Skin of a Lion, Ondaatje concatenates detail purposefully to affect a poetic style that fetishizes aestheticism. As a reader, I have to be very careful in my capacities as individual reader of a particular taste and as a critic able to more or less objectively qualify a text. I do not harbor a particular fetish of the aesthetic, but I can appreciate an author's ability to do so. If I didn't, I certainly would dislike Nabokov and Joyce (I don't; I love them).

So why then does Ondaatje's overwritten style so offend me? Is is the style itself, or is it the style's refusal to convey "proper" reality? Is it the seriousness of it, or is it the sheer monotony of seemingly incongruous style? Ondaatje's prose is like clockwork in that I can always expect a short sentence to follow a long sentence and I can always predict a strange way of describing something visual. It's formulaic in its attempt at being not formulaic, and I struggle with this.

Authors of a certain caliber often deploy irony in order to say something profound or important about their text without referring directly to it. Joyce was a master of this particular type of misdirection. His third person omniscient narrator would produce a painful cliche or a poor metaphor, but within the free indirect style, thus alerting the reader that it's the character thinking in this manner, not the author. The tension between the character's perception and the narrator's reality produces the irony, which in turn, tells us something about the character. Many times, the effect is humorous.

Ondaatje is absolutely unable to produce this type of tension within his text. His characters notice all sorts of bizarre details that throw off the reader from the rhythm of the prose. There exists no tension between the character's perception and the narrator's reality because they are one and the same. The characters speak in the same self-important, all too serious manner that the narrator uses. A self-important style deployed by characters can often be funny because of the incongruity or the pompousness of it. But when that prose matches the reality offered by the ponderous narrator, this lack of tension is intensified.

In the novel, Patrick is convalescing in a hotel room when Clara comes in. She says:


-I've imagined us meeting all over the world, Patrick, but I never thought we'd meet here. By this river you told me about.

She puts her head against him and they were still, as if asleep. Her finger traced a delicate line down along his shoulder, parallel to a cut.

-It would be terrible if we met under perfect conditions. Don't you think?

The sentence not spoken by Clara is an example of fine detail. It humanizes the characters and produces an effect of reality. Both things Clara has said ruin this effect by their sheer unrealistic nature. "By this river you told me about" is firstly, not a pretty sentence, and not something an English-speaking person would say naturally.

Here is another example of "poetic" style that simply screams overwritten. In this bit, Caravaggio is being attacked in a prison cell at night.


His hands are up squabbling with this water creature - sacrificing his hands to protect the body. The inside of his heart feels bloodless. He swallows dry breath. He needs more than anything to get on his knees and lap up water from a saucer.

Here we have four pieces of information conveyed at a very slow pace. It takes time to parse what in the world Caravaggio is thinking because of the "poetic" style being deployed. Caravaggio protects his body using his hands, his heart is pumping wildly, his throat is dry, and he would rather not have a dry throat. But why would a man, being beaten up in a prison, think of his heart as bloodless? The heart isn't a muscle you can feel. A man in the midst of an attack would no doubt think of the fullness of his extremities due to the increased blood flow, ne c'est pas? And why the saucer? The only detail that works in this section is the water-creature, and even then, I'm only willing to accept it because of Caravaggio's confusion about the man and the darkness of the prison cell. But why water?

The details call attention to themselves but not in the sense that their insignificance is significant. Rather, the unrealistic nature of the details call attention to themselves as artifice. This novel is not populated by humans with an eerie sense of noticing details. Rather, the accumulation of details soaked in wrongness creates an artificiality.

But, you might say, a novel doesn't have to be realistic. In fact, many would argue that the novel's very construction implies a distinct opposite to realism, despite any claims to the contrary. Flaubert is often credited with the development of a modern realism that looms over the past 160 years, but his brand of realism was distinctly unnatural. Rather, it was the invisible attention to seemingly unimportant details that created a particular and successful effect within the reader. The difference between which details are noticed and which are not becomes significant to the text.

Ondaatje doesn't need to create reality with In the Skin of a Lion for the novel to be successful if he wants to provide a shimmering hazy reflection of the real world. However, the content of the novel should meet even halfway with the form of the novel.

Considering this novel is distinctly postcolonial in its focus on immigrants and their exploitation by a superstructure of modern capitalism as well as traditional history's tendency to dehumanize or dismiss the immigrant from its pages for the sake of wealthy "important" men like Ambrose Small. It is a novel about filling in the darker corners of history with living breathing people. It is about migrant conditions.

However, this purpose is totally inert when conveyed with this meretricious prose style. The theatricality of the prose calls attention to the construction of the novel as a novel rather than a representation of humanity. In the Skin of a Lion has a false depth right from its very title that masks a superficiality, an interest in fetishizing aestheticism, and l'art pour l'art. Thus, it is completely and irrevocably inert.

As an aesthetic experience, it isn't even successful due to the utter ostentation of the prose. I could unequivocally forgive the novel if the prose had been beautiful but the text artificial. I could even forgive the novel if the text had felt completely evocative but the prose poorly written. But I cannot and I will not forgive both. In the Skin of a Lion is a terrible book that has lots to say and says it in the most boneheaded, most counterfeit, most bogus style it can possibly do it. It is ultimately a shaggy dog style but without a clever pun at the end. It's politically inert and it's aesthetically inert.

It is an empty inert novel and I hate it.