The Anxiety of Choice and the iPod Shuffle 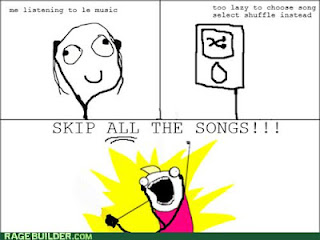 In every choice, there is a sense of loss, due to the blocking of the path not taken. This loss contributes to a sense of anxiety around the choice, making it difficult to make future choices. This is exacerbated in a culture in which we are faced with endless choices. With the ubiquity of the Internet, the increased availability of music, and the increased accessibility of these choices, be it through technology or shopping malls or any other convenience, people are faced with more choices than they can manage. Within the capitalist system, where options are proclaimed as a virtue of that system, choice is utterly hegemonic which directly contributes to a systemic anxiety. There is no better example of this than the mp3 player, in which one's vast music library is made available at any time and in any place. In this paper, I am going to show that the iPod is both a contributor to the anxiety of choice as well as the relief thanks to the Shuffle option which shifts the labour of choosing from the subject to the device.

Lacan said that anxiety is not about the lack of the object, but about the lack of the lack. The logic of capitalism introduces the idea that no matter what the subject consumes, it is never the object, and "thus we endlessly go on searching for the thing we hope will bring satisfaction" (Salecl 63). However, the choice we make must be the correct one, and "everything in life has become a matter of decisions that need to be made carefully in order to come close to the ideal of happiness and self-fulfillment" (Salecl 22) until, of course, that choice is made and then another one must be made. If there are too many choices, there exists the feeling that there is no objective authority, and nobody is in charge. If one has a terabyte of music to listen to, how will one know which is best, and how will one determine in which order to listen to all this? As aforementioned, anxiety about choice comes from an anxiety about loss and any decision one makes is defined by the possibility of the opposite being blocked off. Thus, when deciding to listen to this album or song, there is guilt that one could be listening to another, better selection.

This leads to what has been called "iPod ADD" (Urban Dictionary): having so many songs on your iPod or MP3 player you can't decide on one. When the subject gets what they wished for, be it one million songs, the subject also feels that this is not what they wanted and they begin to search for something else entirely. However, listening to snippets of songs is not the same as listening to whole songs. As Simon Reynolds writes in Retromania, "[s]kipping and skimming... offered the 'illusion of action and decision' but [is] really an insidious form of paralysis" (Reynolds 73). How then to resolve the anxiety caused by too many choices?

Capitalism offers the solution to this anxiety that is caused by capitalism. The most pertinent is the popularity of the iPod shuffle, which takes the labour of making decisions out of the listeners hands and puts it into random selection based on arcane algorithms. The iPod shuffle offers the solution to the very anxiety that capitalism creates while still fulfilling the logic of consumption. Now, the subject can consume without having to make any choices, while still having the illusion of freedom of choice - which is not a freedom.

We invest so much time in the cultivation of the mp3 library that there should a reward. Rather than choosing each individual plants, we let the iPod choose for us in order to maximize enjoyment by not fretting about the choice. Capitalism is about impatient capital, about "a constant desire for rapid returns" (Salecl 22). Wasting time, the greatest crime in capitalism, on deciding which song to listen to while shopping for groceries or commuting to work, is not an appropriate behavior for the amount of labour put into the cultivation of the mp3 library.

The shuffle, or the life-coach or self-help advice columnist cannot behave like an authority, but rather must appear to be simply a helper or a servant whom the individual has chosen to listen to. The subject must retain the perception of the ability to choose and the mastery of the mp3 library. The iPod shuffle or the coach encourages the subject to adapt constantly to the changes with which the subject is presented. Genre promiscuity has created a wide mixture of possible song choices for the iPod shuffle. The subject must learn to adapt to the shock of incongruous song concatenations. By learning adaptation, the subject is learning how to master the self; the irony being that in order to do so, the subject must submit to the shuffle and conform to a dictated listening practice. As Mark Fisher writes in Capitalist Realism, "to function effectively as a component of just–in-time production you must develop a capacity to respond to unforeseen events, you must learn to live in conditions of total instability, or 'precarity', as the ugly neologism has it." (Fisher 34). By learning to live within this mode of shuffle, the subject internalizes and then normalizes the process. Thus, the iPod shuffle mirrors the precarity of the job market. The subject is constantly moving laterally, from a series of short term jobs to the next and the subject feels a constant "demand to be a 'adaptable' worker, to be constantly 'networking'" (Power 21) in terms of location, position and even job itself.

If the authority that teaches the subject what music to listen to is the Big Other, and there is a perception of the weakening of the Big Other, then this might be due to the crisis of capitalism and the incredulity to metanarratives. With so many choices of music, it is even harder to find an expert whose taste aligns with the consumer. Thus, the consumer has no Big Other to help direct the cultivation of their tastes and mp3 library. The subject then uses the iPod shuffle to alleviate not only the anxiety inherent in choosing which individual song, but even to alleviate the anxiety in choosing what in general to listen to.

In conclusion, the iPod contributes to a great anxiety of choice by encapsulating the logic of capitalism by offering a multiplicity of choices. Each choice is marked by a sense of guilt over the loss of the option not chosen. As capitalism offers constant choices as well as the enjoinder to consistently make the right choice, the subject is affected by a pervasive anxiety of choice. The iPod Shuffle helps resolve this problem by moving the labour of listening and choosing from the subject to the device itself, acting as a coach or mediating authority. Thus, with the displacement of labour, the subject is free to consume without guilt or impunity and return to the constant labour that is required in the late capitalist system.