I've been reading a bunch of books from novel series, or romans fleuve. I appear to have some sort of obsession with novel sequences, as if they are somehow more satisfying than an individual novel. I think it's worth exploring why I'm obsessed with serial fiction or longer form narratives than the singular novel or the short story, but I have yet to come up with a possible explanation. I do know that I'm adverse to short story collections (despite reading some magnificent collections) and more willing to forgive technical issues when the canvas stretches to multiple novels. That being said, this particular trio of reviews concerns two novels in two cycles and one stand-alone. I've organized this trio by their chronological setting; the first being set in the 20s, the second in the 30s and finally the last one set in the early 40s. All of them concern Englishmen and women, and all of them are concerned with social structures. 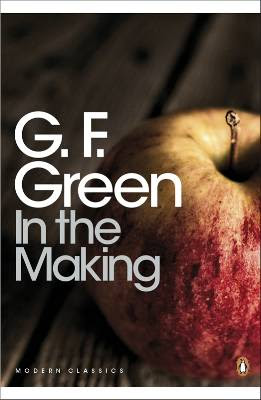 The introduction to the recent Penguin reissue remarks that G. F. Green, a writer hereto wholly unknown to me, was saddled with the not unfair descriptor of "writer's writer". It seems that Green was more well known among fellow authors than the greater reading public. This might be due to Green's intense and focused prose, or it might be due to the subject matter.

Randal Thane is apprehensive about leaving his sister, his governess and his home for prep school, but when he arrives, he enters into a whole new adult world. He becomes obsessed with an older boy who holds incredible power over Thane.

In The Making is incredibly short, but incredibly dense. At a slim 144 pages, this took me a week to read. Every sentence is intricately constructed - so much so that the focus of the criticism should be directed at the prose, rather than the plot. In terms of story, not much happens. But due to the prose, each set piece takes on a dreamlike epic tone, where the hypersensitivity of the protagonist intensifies the experience. Green manages to successfully capture that hotness, that queasiness of falling in love so perfectly, where every step you take is imbued with importance and solemnity.

I'm reminded, of course, of At Swim, Two Boys which I read earlier this year. Both novels are concerned with first love among two boys during a period when such a thing is not permissible. Where At Swim, Two Boys deploys a large canvas, In the Making uses the smallest one possible. There are other characters in In the Making, but they don't really matter at all. It's all about the two boys and their "love affair".

If that's even the way to describe it. The entire novel is focalized through this hypersensitive protagonist, so it's entirely possible that the romantic/sexual interest is not entirely reciprocated. There are hints, but even the climactic kiss that the boys share is fairly ambiguous:


[Randal's] hands were clenched in the ruffled hair and he gazed into Felton's eyes. The blood knocked through his body and blinded him. He pressed his lips on Felton's mouth. Felton stirred, and Randal remained motionless. His search and desire were for the instant forgotten for they had momentarily become that action.

I was inclined to read this scene a couple times. It's fairly easy to make the mistake of thinking that Felton either did or did not return the kiss. Green keeps Felton's thoughts and actions fairly obscure, in order to keep the focus on Randal. Thus, the reader is left without the knowledge of Felton's feelings.

On the whole, I liked the novel. Its prose was a bit too dense for me. As much as I enjoy quality prose and poetic language, that's not really the type of reader I am. I'm hesitant about dismissing the novel due to my own personal tastes when this is clearly an impeccably constructed novel that somewhat suffers from its period. The sexiest this novel ever gets is the illicit kiss. The rest of the novel works due to its hazy dreamlike qualities and Green's purposeful ambiguity. 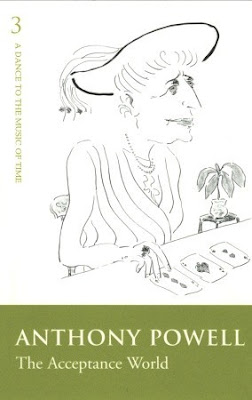 It's been three years since I read the first two books of Powell's A Dance to the Music of Time (I never bothered reviewing the second book) but I remember quite liking them for Powell's elegant easy-to-digest prose, and for the humour. I'm not quite sure why I didn't keep reading, but I'm somewhat glad I didn't. I wasn't the strongest reader in 2009 (neither am I the strongest now; I have much to learn). Using the Wikipedia summaries of the first two books, I plunged back into the world of Nick Jenkins and his gigantic cast of dancing twirling friends and acquaintances.

Once started, I'm immediately reminded of the disposability of Powell's construction. That is to say that everything seems so inconsequent and the scale so utterly exiguous. It's due to the paltry size of the world in contrast with the size of the cast. That is to say, that despite deploying a cast of dozens, the world seems small because everybody is connected through familial or work relations. Plus, every conversation and every interaction is based on the most frivolous of circumstances. It's a nonstop cocktail party for seemingly three books in a row.

This isn't necessarily a negative attribute of course. I've previously expressed an affinity for the "cocktail party" trope in fiction, in which upper class dolts make buffoons of themselves through dialogue and imbibing to excess, so it's quite out of order for me chide The Acceptance World for the same thing. After all, Oscar Wilde made a career out of conveying the inconsequentiality of his own society with wit and aplomb.

At the third book, I'm starting to get a better sense of the large scale project that Powell has embarked on, something that is hinted at in the two previous texts. It's hard to portray a sense of time's expanse when the canvas is only two small novels long. With more space, Powell is able to display the temporality of these social connections. In order words, the longer this project goes on, the more its themes of dance are concatenated.

In terms of a singular novel, The Acceptance World is a bit of a mishmash of episodes only loosely strung together by a shared cast. The contentious position of secretary to a fading novelist structures most of the action of the novel. It creates the background for the episodes of dinner parties, cocktail parties and gossip. Plus, the political upheaval happening contemporaneous to the novel's action comes to the forefront. Marxism, Trotskism and Communism are responsibly name-checked to increase verisimilitude within the text.

Another element come to play is the relatively novel concept of the easy divorce. Of course, easy is a relative term, as the laws in the UK during this era were notably antiquated and somewhat lopsided in its distribution of blame or social judgment. As the cast comes of age - it appears the main characters are in their late twenties, early thirties - the insolubility of marriage rears its nebulous head. How to deal with the estrangement of forced cohabitation or the alienation from marriages built on social connections rather than love? The end of The Acceptance World is simultaneously optimistic and wary of the future of a love affair; Nick has engaged in a relationship with Jean, a married woman who doesn't love her estranged husband. However, the husband is due to return, and Nick and Jean's future is not quite so clear. Nick expresses hope due to their love for each other, but worries about the reunion of man and wife. It's an interesting note to end the novel, and elevates the rest of the inconsequential fluff to another plane. 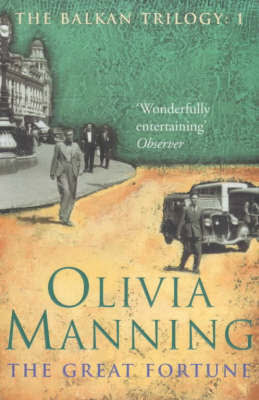 We finish this trio of reviews with the beginning of another sequence of novels. This time, it's Olivia Manning's Fortunes of War which comprises six novels. Based on her own experience with her traveling husband, Manning depicts a marriage and its inherent complexities across a canvas that includes the Second World War, Romania and later Egypt. However, we begin with The Great Fortune, starting when Guy and Harriet have just married and come to live in Bucharest.

The Wikipedia page helpfully informs the reader that Manning's critical reputation has been decreasing in recent years due to her Orientalist approach to Eastern Europe. She depicts a country of Others and their bizarre foreignness. Harriet is always an outsider to the Romanian world, and is thus alienated from it because of its insurmountable differences.

However, I would argue, this unfairly reduces the complexity of Manning's novel and does a disservice to the overall project. It seems to me that Harriet is not only alienated from her surroundings, but also distanced from her marriage and even her conceptions of what marriage should be. Her social situation is far more precarious than she suspects, which I believe mirrors the stature of the British Empire.

The Great Fortune offers a portrait of the decline of the British Empire as characterized by Yakimov, the mooching laze-about that attaches himself to whomever would offer him a meal. On the rare occasions that Yaki has money, he spends it frivolously on rich meals and expensive wine, never worrying about the future, content in the illusion that as a British subject, he'll always have a community.

I'm inclined to defend the novel against accusations of Balkanism or Orientalism because that allegation engages in the same type of essentialism that Said's theory decries. Not everything that occurs in The Great Fortune reduces or flattens the Romanian people. That's not to say that Manning offers a totally nuanced view of Bucharest; it's not the purpose of the project to do so. Rather, Manning offers a nuanced view of an alienated subject within a world that is not familiar. The subject is alienated from itself, a bifurcated subject within a discourse totally unfamiliar.

Manning's ability to relate such a topic gains its power from her masterful eye for detail. Her evocation of Bucharest is totally immersive - even with the suspicion of inauthenticity. She paints a wondrous portrait of a city through four seasons: the smells, the clothes, the weather, the snow, the filth, the cars, the colourful characters. It's all quite effective.

The second half of The Great Fortune has a bit more energy than the first half, due to the increasing speed of the oncoming war. In the beginning, the proceedings are somewhat listless as Manning takes great care in introducing her quite large cast and their respective positions. By the halfway point, the threat of the Nazis and political problems becomes palpable, creating conflict and anxiety among the characters. It comes to a head with a brilliant sequence in which Guy puts on an amateur production of Troilus and Cressida (a play I'm totally unfamiliar with) that totally outside the cast's awareness, mirrors the play's fall of Troy with the end of the innocence before the war. It's certainly the best part of the plot, and I'm totally reminded of the comedy inherent in the amateur production that Robertson Davies so professionally mined.

I quite enjoyed The Great Fortune and look forward to the next chapter in the saga.
Posted by matthew.