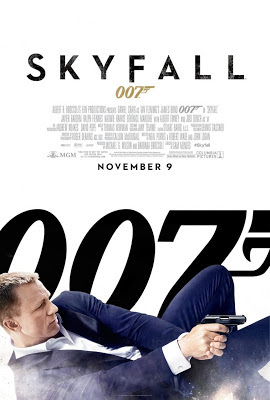 Yesterday at work, somebody asked me what I thought of Skyfall, considering I had seen it on opening night. Now, at work, I'm one of three guys that have an academic background in English, out of a possible thirty to forty. Thus, any time I'm asked a question like this, it's totally fraught with complications. Are people asking me because they think that I'm a good judge of film? Are they asking me because I have a stronger background in film than they have? Or are they asking me in an ironic way because I tend to share my opinions with everybody, even if they didn't ask? And how do I answer? Do they care about the complexities of the film and subsequently, of my opinion? Or do they just want to know if it's worth spending money on?

When I answered, I'm simply said, "It's better than Quantum of Solace, but not as good as Casino Royale." I feel like this reply does the work of answering the question while not conveying the nuances of my opinion or the strengths and flaws of the film - which people are generally not interested.

One of my friends, who went to the film with me, interrupted me and said that I was too judgmental. He went on to say that I don't like anything and that nothing's good enough for me. I became defensive, tried to argue with him using logic, and then we got into the oft-fought Hobbit debate (he's totally on board with Jackson's trilogy - I couldn't care less). Long story short, his accusation that I'm too judgmental gave me pause to think.

You see, I'm a longtime defender of James Bond, including the shitty Bond films. Even the obvious misogyny and imperialism and sexism and techno-fetishism isn't enough to deter me from being entertained by a Bond film. I've even read a few of the novels. In my review for Moonraker, I framed my discussion with the idea that even if I like something, I can at least be realistic or aware of its short-comings. I think this philosophy has served me well (enough that somebody asked me contribute to their new urban website as a film reviewer). I rarely offer encomia for even the things I love.

Despite my love for Casino Royale, I don't think it's perfect. Surely we can all agree that the first hour of the film is particularly stirring while the second hour is fairly forgettable.

On the other hand, I'm one of few defenders of Quantum of Solace. Yes, the film is tonally uneven and a mess structurally, but there are some excellent scenes. The opera sequence is a bravura impressionistic performance, and the climactic showdown at the end is thrilling. Everybody seems to give Quantum of Solace a bad rap just because it doesn't quite hit the same level of quality as Casino Royale. However, it's still leagues ahead of most of the Roger Moore Bonds.

This should serve to demonstrate that I am judgmental, but honest and fair. That's what I strive for in my reviews. I want to show that I can balance the good and the bad of the film and come to a conclusion. All films have some merit and some weakness. It's always worth understanding them. And after which, putting the film into a greater cultural context. What kind of culture produces or reflects such a text, or vice versa? Simply accepting a text, without any greater awareness, strikes me as empty consumption and is especially fraught when the text is engaging in suspicious ideology.

James Bond, as a franchise, is a great example of this, I should think. What else does Bond offer but empty action, rampant sexism, veiled imperialism, and quite a bit of technological fetishism? What else is there to these films?

Thankfully, the three Daniel Craig films have done some work in asking this question; they have laboured to ask what value Bond has in the 21st century. The first film posited Bond as a battering ram, simply a tool of the British government, but by the end of the film, the tool has developed a sense of autonomy. The second film asks what happens when this autonomy is not rooted in "Queen and Country" but personal investment. It's an attempt to rationalize how a man could commit so many murders in the name of a country.

The third film, Skyfall, and the ostensible object of this review, asks what is the relevance of figures such as Bond in a technologically-oriented, politically murky unstable global stage? What value does one man have in fighting against unending waves of terrorism that have no faces and no rational motive? This is why I think Skyfall is thematically stronger than Casino Royale, but not better as an entire film experience.

Skyfall opens incredibly strong. In fact, it's a better pre-credits sequence than any other Bond film in the entire franchise. Not only does it pertain to the plot, but it opens up some of the themes of the film. On top of this, it's an utterly visceral and incredibly shot sequence. The trailers are wisely based on the opening scene, because this is where all of the film's thrills are held.

There's a foot chase, followed by a car chase, followed by a bike chase, followed by a fight on top of a moving train. It's the car chase that's extremely effective. Mendes, and whoever his capable editor is, arranges the shots in a different and surprisingly coherent manner. It's a stark contrast to Quantum of Solace's awful opening. Mendes shoots the car crashes from the perspective of the civilian cars being caught in the crossfire, but then cuts away, assuming the audience knows what happens when a car hits another.

It's this type of confidence that propels the first half of the film. For an hour and a bit, I was utterly convinced that this was going to be the best Bond film ever made. I had no idea where the plot was going (save for one super obvious thing regarding M) and the direction and cinematography (ROGER DEAKINS FTW) were immaculate. The Shanghai skyscraper fight is, hands-down, the best action scene I've seen all year, bar none. It's so good that I'm positive nobody will top it by year's end.

My enthusiasm was running high, all the way up until Bond and the villain finally meet. And thus, at this point, the halfway point, Skyfall runs out of energy entirely and becomes a series of loosely linked scenes without any emotional investment or verve.

Once Javier Bardem's villain is introduced, the film liberally borrows the cat-and-mouse structure of 2008's The Dark Knight, of which I've wrote copiously. Bardem's villain gets caught (all according to plan) and when Bond realizes he's been one step behind, he turns the tables. Or whatever.

There was an intriguing moment during the film that I have to spend some time talking about. Javier Bardem has Bond tied up to a chair and he's trying to convince Bond that M is actually the bad guy in all this, that M's manipulation and coercion is far more dangerous because it's ideologically fraught and tied up with the illusion of "queen and country". He opens Bond's shirt to see the bullet wound that Bond suffered from earlier in the film (which is confusing, but that's another paragraph) and then... touches him sensuously. Bardem grips Bond's thighs in a provocative way and asks him if there are any official protocols on that.

What elevates the scene from awful (oh noes, the villain is gay!) to interesting is that everybody in the theater, except for me and maybe a few other people, were laughing. I'm assuming that such overt queer performativity was uncomfortable for the audience and their confused reaction was to laugh out of a feeling of awkwardness. This, to me, is utterly fascinating.

It's the ambiguity of Bardem's character that is most affecting, I think, but simultaneously a weakness. Like I mentioned, Skyfall owes quite a bit to The Dark Knight, especially in the sense that Bardem, like Heath Ledger's Joker, is a figure of chaos and without meaning. He's unmoored from the signifying chain and this creates anxiety in those who cannot slot him into an organizing category.

However, The Dark Knight was focused on contrasting three figures dispersed across a spectrum of law and order. Skyfall does not manage to compare Bardem's ambiguous villain with any figure. Instead, he's simply an obstacle for Bond to overcome, rather than an ideological opponent.

If you had switched the villains from Quantum of Solace with Skyfall's, then perhaps both movies would have been recuperated. Quantum of Solace's antagonist was unfettered and out of control capitalism and therefore dangerous to the British Empire. This would make sense in putting Skyfall's Bond in context with a world increasingly dissimilar with Ian Fleming's world.

And Bardem's villain is totally motivated by revenge, which would have been an excellent contrast with Quantum of Solace's Bond's rationalization of revenge using state-mandated ideology.

But alas, this is not to be. Bardem's emptiness and irrelevancy in Skyfall's themes are part of the film's downfall. The 23rd Bond film expends all of its energy in the first half and degrades into a listless exercise of cat-and-mouse in the second half. The finale of the film, depressingly predictable, seems so utterly rote and mechanical, as if the filmmakers had a better idea in mind, but this ending was the only one approved by the studio. The climax goes through the motions, and thus it never earns the emotion that the finale thinks it deserves.

Skyfall, while exhilarating in the first half, is a letdown by the end. This is especially true in the last couple moments when the fanservice becomes extreme. But that's another article, I think. Rather, let's leave the review with this one thought: Skyfall is a good movie, but not great. It does a lot of good work in trying to understand Bond as a 21st figure, but never follows through on its own premise.

So this is my long review that justifies my judgmental behaviour. This review's dual purpose is to articulate my feelings on the film (always complicated) as well as understand why I have complicated feelings about things.
Posted by matthew.