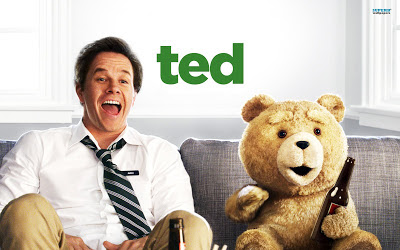 There's an intriguing moment near the beginning of Ted when the eponymous teddy bear and his human best friend are watching Flash Gordon. Wahlberg says that this is the American fantasy: a football player called to save the universe. I would contend that the true American fantasy has shifted due to the rising of women's social capital since the 1960s. The real fantasy is to sit on the couch and smoke weed with a bro while a hot chick asks for little from you.

Of course, later in the film, Wahlberg and Ted meet Sam Jones, the star of Flash Gordon, and they proceed to party. And in the eyes of the hot girlfriend, partying is bad, bro. Mila Kunis, an otherwise attractive and smart person, seems to find Wahlberg's character lovable enough to put up with Ted, but when she wants Wahlberg to settle down, he goes out and parties with his id, otherwise known as Ted.

There's a strange trend of films from the past fifteen years in which children in the bodies of men are forced against their will to grow up. The films are structured as a quest story, where the object of their quest is their own maturity. Judd Apatow and other filmmakers have relentlessly explored what happens when a bro's id is left untethered. Of course, in typical American fashion, some sort of compromise is discovered by the end of the film, whereby the bro and his best bud can both achieve maturity while still banging the hot chick.

Culture is where society is mediated for the individual. The subject sees himself or his society reproduced and repackaged upon the screen, dispersing pat pro-social messages across the surface. Ted, and similar films, are expressing a deep and wholly recent anxiety of white middle class men: women are controlling and impose alternative structures. Of course, this alternative structure is simply engagement with society on a productive level. The montage in these films usually include the main character throwing themselves into their job, becoming better employees. A connection is established between maturity and loyalty to labour. The films are thus asking their audience to engage in the game of capitalism in order to bang the hot chick and keep the bro.

This is a reductive reading of Ted and films of its ilk, but certainly an illustrative reading. I recently read this book by Adam Kotsko and while it was an interesting read, I think Kotsko is missing out on the economic factors. He argues that there are three forms of awkwardness: everyday awkwardness (like a guy not understanding how to react in situations), cultural awkwardness (like marriage being an unfeasible enterprise) and radical awkwardness (assimilation of different cultures creates strain). He devotes the middle third of his essay on Apatow films and how they express an anxiety over the controlling structures of marriage. In times of greater gender fiscal equality, women have the freedom to choose better. Thus, the characters in films are implicitly asking themselves why the women would bother to choose them. Thus, the quest for maturity presents itself.

In Seth MacFarlane's directorial debut, Wahlberg is an exceedingly attractive guy without confidence who has a teddy bear that represents the wish fulfillment of every middle class white American: he sleeps around, he parties, he has had casual sex with celebrities, he has no responsibilities. This last item is explicitly referred to in the film. During the climax of the crisis of friendship, Ted berates Wahlberg for blaming everybody else for his own problems. Nobody forced him to party; nobody forced him to stay immature.

Here is where I think Kotsko's analysis falls a bit short. I would contend that while no person is forcing Wahlberg's actions, his entire ideology is being shaped by culture and the greater organizing principles of capitalism. There is no greater enjoinder in the present day than to party. The demand to party is tyrannical to the point where films such as these are inevitable.

Capitalism orders the subject to consume, immediately buy products and replace them just as quickly, and to indulge in pleasure. Advertising is always asking subjects to treat themselves cause they "deserve it" but even this tyrannical enjoinder to enjoy is limiting. People reject being told what to do. They will choose not to do something even if it is pleasurable because they have been ordered to do so. Thus, Wahlberg and other bros are being constantly asked to party, but inside, they seek structure and order. All humans do. They secretly desire to be controlled.

The inevitable response to this is to transfer the desire to party onto fictional characters such as Ted, who get to enjoy and party to the maximum limit. Ted is then the fantasy figure. The character who is both admired for his freedom and paradoxically resented for the very same reason.

Therefore, as I mentioned, films like Ted are inevitable. They represent interpassivity; the films do the job of partying for us so that we don't have to. However, as they are still part of culture, they also represent anxiety about controlling structures.

Inevitably, a film like Ted is a complicated and contradictory exercise. It is a fantasy that comes to be resented. Ultimately, the film, and others, end with the compromise of satisfactory interpersonal dynamics (engagement within society as productive subject) and measured consumption (the best friend remains in life). Still, subjects would prefer unfettered consumption and total self-indulging. There's a reason why the third act of Ted, a wildly atonal chase sequence, falls so flat, as does the by the numbers conclusion.

The great success of capitalism is that it can offer a structure fundamentally antagonistic with itself as a solution. There is no "alternative" structure as presented by the film. Rather, it's choosing between two modes of subjectivity that are still ultimately subordinate to capitalism.

And that's how you do a Marxist reading of a bromance comedy.
Posted by matthew.