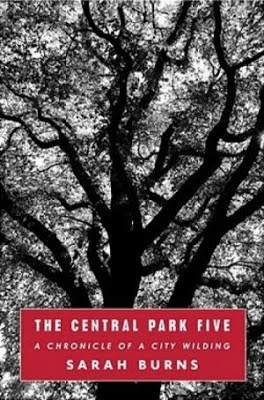 At the end of reading Sarah Burns's account of the wrongful convictions of four black and one Latino teenagers, I was in tears. Not only for the lives wasted, but for the victims. Despite the relatively happy ending of this story, the Central Park Five had a large chunk of their lives taken away, replaced with horrendous memories and wounds etched deeply in the psyche.

Obviously, I was deeply taken with Burns's account of the crime, the arrests, the investigation, the trial, incarceration and eventual overturning of the convictions, and this is due to Burns's mostly powerful and persuasive prose. Burns does not pretend at any point to be an objective journalist, which might increase the affective power of the book, but certainly complicates the narrative's effectiveness as document.

Burns's goal for the book is clear from the outset, which should not be surprisingly considering that the outcome of the trial and eventual overturning is well known and well publicized. Essentially, The Central Park Five functions to criticize a justice system that is fundamentally racist. The narrative also aims to indict any member of the public that had private interests not connected with the innocence of the five teenagers. Any lawyer or public figure that had any political motive is characterized as essentially exploiting the case. Not only that, the narrative heavily castigates incompetent figures in the case, from the "sloppy" and "disjointed" lawyers to the officers and detective that Burns extensively implies were outright fabricating testimony. She offers the great corruption investigation of the NYPD in the mid nineties and the neologism "testilying" as damning evidence that the NYPD were only interested in one amazingly racist narrative and not in any inconsistencies and contradictions.

Unlike other complicated legal narratives, such as the West Memphis Three trial or the Jena Six, The Central Park Five is fairly clear and concise. The five young men didn't do it; the real rapist did and confessed with plenty of physical evidence and intimate knowledge of the crime to corroborate the confession. The whole incident seems, according to this book, fairly black and white. This helps the emotional resonance of the text (hence my tears) but again, serves to weaken Burns's argument.

Is The Central Park Five a "true crime" narrative? Is it a political polemic on the systemic racism within the USA? Is it character study of wrongfully convicted teenagers who know have varying degrees of success navigating a post-exoneration life? Due to its brevity and Burns's outsider status (she is not a journalist but a law student), The Central Park Five does not quite function as any of the aforementioned genres. Instead, this text is a mishmash, a highly affecting portrait of a city with a crime problem and a justice problem. Burns doesn't spend enough time with the Five post-conviction, and she doesn't spend enough time with them after the overturning of the convictions. Instead, the men become ciphers with Burns's vitriolic rhetoric taking center stage.

Burns presents Ann Coulter's remarks on the overturning of the case with little commentary other than the heavy implication that Coulter herself is racist. The article is here, and it's worth reading. From the first sentence, Coulter engages in the same language as the sensationalist press of 1989; she refers to the group as "a mob of feral beasts" and goes on to deploy other animalistic metaphors. The comparison between black man and beast, a common theme in Burns's narrative, is still prevalent within the media, she eventually concludes.

The rest of her conclusion is unsatisfactory, unfortunately, but this might be due to her inexperience with the greater justice system as a whole as well as the rhizomatic nature of the justice system itself. The world is complicated and Burns admits that there are no easy answers to how best to prevent such an incident.

Despite the weakness of her conclusion, as well as her refusal to be either an objective journalist or an effective political analyst, The Central Park Five is one of the most arresting and affecting portraits of an intrinsically flawed justice system that I have ever read. Her entire thesis, that the system is rigged, is so totally convincing that she could have simply suggested such a thing and I would have been persuaded. This is an important and engaging text.

Of course, I haven't even discussed the subsequent documentary (how I heard of the case) and the subpoena issued by the City of New York. You can read a bit about that here, in an interview with the Five. I plan on seeing the documentary, and having my ire raised again, a hatred of systemic abuse and a dehumanizing process motivated by statistics rather than individual human lives.
Posted by matthew.