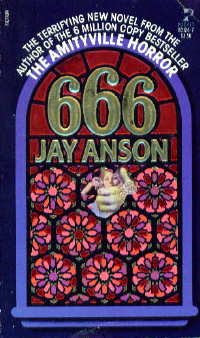 Jay Anson died in 1980, just before publication of his second (or first) novel, 666. It was published in 1981, right at the end of Jimmy Carter's term and during a long period of social and economic upheaval within the United States. 666 is about a haunted house that creates (or exacerbates) conflict between three people, a married couple and their male friend. I want to put to you in this post that this novel is reflecting and circulating multiple elements of anxiety within American society during the 1970s. It's a common and obvious observation to note that horror fiction tends to be a manifestation of conscious or unconscious fears. The more financially successful and popular the text, the more universal or generalized the fears with which it is dealing. Jay Anson's 666 isn't simply a haunted house novel, but rather an expression of anxieties related to the recession, inflation, gender employment disparity, female empowerment, marriage, divorce, and the housing situation within the United States.

In order to demonstrate this, I need to do a bit of historical contextualizing. Jimmy Carter's presidency can be distilled into a matter of economics. During his presidency, the US economy went through a severe recession from 1973 to 1975 as well as a later period of extremely high interest rates and double-digit inflation. Before the advent of neoliberalism (monetarist economics, AKA Chicago school), most government's responses to inflation was to spend money and to increase interest rates in order to promote lending (Keynesian economics). More lending in this case can be taken to mean more mortgages. Thankfully, this was mostly successful as by 1979 (before the oil crisis), the US economy had grown by 5%, unemployment decreased significantly, the median household income improved by 5% as well. Thus, more people were employed and owning homes. However, all was not good. Inflation was still high, so Carter appointed Paul Volcker to the Federal Reserve in order to alleviate the problem. He raised interest rates — by 1981, some were as high as 20% — which contributed to a sharp recession at the end of the decade.
The 1979 energy crisis, caused by a multitude of complex geopolitical and economic factors, helped end any period of growth after the 1976 increase in the economy. Consumer confidence decreased significantly to the point where Jean-François Lyotard diagnosed a mass incredulity to metanarratives, calling this the postmodern condition. I would contend that this mass incredulity represents the greatest contributor to the horror boom of the 1980s, through the logic of horror's reflection of societal anxieties.
One metanarrative being continuously questioned after the 1970s is the "American Dream," whereby the exceptional individual has a right to a home, a job, a family, and the ability to juggle labour and leisure to a self-satisfying degree. The American Dream suffered a crushing blow thanks to a long decade of high interest, high inflation, and many people owing more on their mortgage than their home was worth (negative equity).
Using statistics from the US government, we can see that in 1970, 62.9% Americans owned homes. A decade later, this number has jumped by 2.38% — this increase is double from the previous decade's increase. With more people owning their own homes, but paying a significant amount on them, we can see why the haunted house narrative — already popular in the American conscious — comes to rise in the 1970s. The mortgage, the debt that weighs on you like a burden, comes to literally haunt you in the form of ghosts or malicious presence. A common aspect of haunted house narratives is the unbelievably low price at which the unsuspecting family acquires the home. Thus, the cheaper home, while economically attractive, is ultimately dangerous and ends in heartbreak for all involved.
The plot of the novel details the mysterious appearance of a home across the property line from the main characters' house. The suspicious and odd looking Victorian manse was apparently moved in its entirety across the nation after a man murdered two people in the house. It's set up as a rental property, and the protagonist and his wife become obsessed with the house.
In Jay Anson's 666, there is a constant concern and attention being paid to the physicality of the homes themselves, due to the career of Keith, the married protagonist. He owns his own carpentry business (American entrepreneurship fantasy) and has married Jennifer, an already divorced interior decorator. Despite the greater economic hardships of 1979, the year the novel is set, Keith is making enough money that Jennifer is able to give up her career and be a housewife. Although, there doesn't appear to be a lot for Jennifer to do other than make Keith his meals. There is a significant absence of feminine household maintenance in this novel — something I'll return to in a bit.
Keith's career enables the author to focalize on carpentry-specific details of the various homes featured in the novel. There's a preponderance of architectural jargon, including long passages detailing the renovations that Keith performs on the haunted house in the middle of the novel. Not only is the haunted house detailed (incredulously numbered six hundred and sixty six in both its previous address and its current!) but also Keith's home and even the couple's friend's apartment what with its antique expensive furniture.
David, the single handsome man that comes between husband and wife, is a successful antiques dealer that is everything Keith is not: cultured, sophisticated, charming, exceedingly good looking and in incredible shape, despite just playing racket ball every week. He is friends with Jennifer, meeting in professional circumstances but evolving into close friends, and this makes Keith, a former college football player, quite jealous.
What's interesting about this dynamic is the same thing that The Exorcist plays upon: divorce within American society. In order to demonstrate that I think 666 is manifesting a deep anxiety about divorce, I'll need to do some more contextualizing.
At some point in the past thirty years, it became fashionable to remark that 50% of American marriages end in divorce. The very fact that this "statistic" is circulated so easily and for so long suggests that there might be a grain of truth to it. In fact, the divorce rate in the US has increased significantly from the 1960s to the 1970s. Two academics write, quite succinctly that

The steady rise in the United States (U.S.) divorce rate from the mid-1960s to the mid-1970s has been a topic of much debate among demographers and economists (Friedberg 1998; Goldstein 1999; Michael 1978, 1988; Oppenheimer 1997; Preston 1997; Ruggles 1997; Wolfers 2006). Researchers have focused much of their attention on explaining the rise in the divorce rate by examining changes in divorce laws during the early-1970s (Friedberg 1998; Wolfers 2006) and the economic empowerment of women (Bremmer and Kesselring 2004; Nunley 2010; Ruggles 1997). The consensus from the literature on divorce laws suggests that the reforms led to a small, transitory rise in the divorce rate.