Blow Your House Down 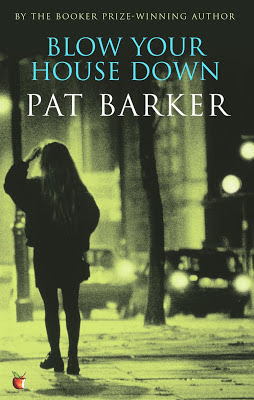 The project of Pat Barker’s Blow Your House Down seems fairly clear. It appears to be an attempt to humanize the victims of the Yorkshire Ripper who famously murdered a large amount of prostitutes. The police response has been continuously and consistently criticized for their lack of cooperation among jurisdictions as well as their seemingly disregard for the victims, mostly working class prostitutes from Yorkshire. The media was also unhelpful in their minimizing of the victims’ life and humanity. It appeared that no one seemed to care about the young women being brutally murdered and left to stiffen in the cold unblinking English rain.
Thus, Blow Your House Down is a fictional portrait of a small group of prostitutes in a Northern England working class village who are being victimized by a killer similar to Peter Sutcliffe, the Yorkshire Ripper. The novel starts with Brenda, a mother of three and wife to an absent husband, who in flashbacks, reveals that she worked at the chicken factory, while the person minding her children abused them. After being sacked from the only available job, Brenda turned to prostitution. The novel’s middle section focuses on Jean, an older more experienced prostitute with a distinctive neck scar from a particularly violent experience with a john. Her character appears to be the mobilization of a refutation of the prostitute stereotype that had previously plagued the discourse. Jean does not sell her body out of desperation but rather because she feels she is suited to the job. She reflects,


I like this life. I’m not in it because I’m a poor, deprived, inadequate, half-witted woman, whatever some people might like to think, I’m in it because it suits me, I like the company, I like the excitement. I like the feeling of stepping out onto the street, not knowing what’s going to happen or who I’m going to meet. I like the freedom. I like being able to decide when I’m going to work. I like being able to take the day off without being answerable to anybody. (Barker 80)

She is not the common prostitute story, despite what the other women in the village think. The novel concludes with the account of one of the working women from the chicken factory. Maggie is a survivor, knocked down in the street by somebody the police suspect to be the killer — however it is left ambiguous in the text if it is truly him. She suffers a horrible head wound and a very visual scar on her head. Once returned to the family home, where her husband and sister diligently help with the convalescence, she becomes embarrassed about the attack. She tells her friends that she slipped and fell, as if she should be ashamed of the attack, as if she deserved it.
Blow Your House Down does a lot in a small amount of space. Despite not hitting two hundred pages, Barker manages to write something incredibly affective as well as technically impressive. The chicken factory and subsequent physical details looms over the village. Feathers, blood, guts, offal, and smell permeate the women’s lives, whether they are prostitutes or not. The chickens, mutilated without a thought by an economic system that requires it, are meant to be a symbol for the chewed up lives of the working class women — after all, chicken is “the English slang for prostitute” (Ardis 44). One of the jobs at the factory involves shoving the legs of the chicken into its own arse. This is uncomfortably mirrored in the scene in which the killer murders Kath, an older alcoholic prostitute, and shoves white feathers into her bloody vagina until she has a bunch sticking out. It’s clear that the text is comparing the fate of the working class with the product of their labour.


The Marxist angle of this novel is extremely tantalizing for me. Of all the motives given by the characters for their profession, the most convincing and widespread is pure economics. It’s the hardships of the post-mining boom in Northern England, a traditionally industrial economy that has caused the most amount of damage to this village. However, this leads me down the path of conflating prostitution with victimhood, something that the text appears to actively resist, especially with Jean and some other characters. The prostitute is a confusing subject for the heteronormative mainstream discourse. While at one end of the subject, there is empowerment and individuality, exceptional entrepreneurship, on the other end, there’s the monetizing of the sexual act. The prostitute is not a traditional labourer, but Blow Your House Down implicitly equates the job with working at a pub or working in the factory. The commodification of the body, while normally accepted within society, is reviled when this commodification happens outside the traditional economy, when the commodity is circulated in a subsidiary and illegal market. Again, we can see that this text’s project is to normalize prostitution — not rationalize, excuse or apologize for, but simply to naturalize.


The text does this through the Marxist throughline of economic disparity and class struggle, but also through careful and deliberate characterization. I would be cautious at using the word “sisterhood” to describe the loose group of prostitutes that hang around in pubs, work in informal pairs, and pal around, but the system of comfort and support that the women have built seems to be integral to the sustainment of their individual sanity. Their comradery is the scaffolding to their persistence in the game. In addition, the women are portrayed first as women, then prostitute secondly. Their labour is not their identity, but rather a job. Instead, the women are women, with feelings, wants, desires, dislikes, and sisters and mothers and wives and subjects.


In “Woman on the Market,” Luce Irigaray writes that “wives, daughters, and sisters have value only in that they serve as the possibility of, and potential benefit in, relations among men” (172). Blow Your House Down simultaneously resists and confirms this. The few male characters in the novel that are named are mostly husbands and boyfriends who inevitably disappoint the women — or inadvertently frighten Maggie by virtue of being male. Other than these men, there are the countless, nameless customers that seek only sexual satisfaction, and in many cases, some emotional support. The men extract value from the women in the novel. However, they are only able to extract this value due to the fact that the women are not simply commodities being exchanged in a market. It is their very dimensionality that allows for greater use value. In this way, the text resists Irigaray’s axiom.


In an intriguing flashback scene, a pre-prostitution Brenda is visited by social workers in order to determine if she is able to benefit from state financial support. The visit is striking for Brenda, as it appears to her that the social workers think that if she became pregnant from a man, it should be the man that pays (Barker 38). They implicitly sustain and perpetuate a heteronormative system in which subjects conform to class distinctions. Brenda resists this. She chooses to become a prostitute, not because of lofty ideals of independence or class mobility, but because of necessity to her family. Out of this motive derives the dimensionality that results in the exchange value.


This is what cautions me against the conclusion that prostitution is a form of victimhood or oppression. Blow Your House Down wants to naturalize a working class act of economic necessity and contextualize it, effectively humanizing the victims of a misogynistic killer. The Yorkshire Killer murdered prostitutes for arcane and unimportant reasons. Rather than apologizing for a murderer, Barker’s novel seeks to flesh out the victims, who in the eyes of the public, were empty flesh that got what coming to them.


Irigaray writes that women are only the mother, who is all use value; the virgin, who is all exchange value; and finally the prostitute, who is both use and exchange value” (Irigaray 187). By collapsing these categories into a three dimensional character, Barker destabilizes the reader’s constructions of the women (Ardis 49). It is insane that critics including myself would praise Barker for this when it should be the absolute standard protocol for the development of a character. The very fact that we congratulate Barker for her ability to write fully fleshed out character says something about the excess of flat female characters that populate fiction.


Blow Your House Down is an immensely dense novel despite its short length, but it is entirely successful in its project. The women are complex, fully developed people that do not easily exist in the peripherals of society, where the patriarchy would have them. They produce children, contribute to the economy, and support each other. They do not hide in the figurative shadows, despite a man preying on their bodies. They are fully aware of the ideological dissonance in their independence and dimensionality while being subjects of an economic transaction that flattens them.

There's one other thing that I wanted to discuss in relation to this novel. I have no idea why I decided to torture myself by looking at the book's page on Goodreads. I suppose I knew what I was going to find and I derived some pleasure from the confirmation that yes, the users of Goodreads are for the most part, the worst readers in the world. Here is one example of what I'm talking about: 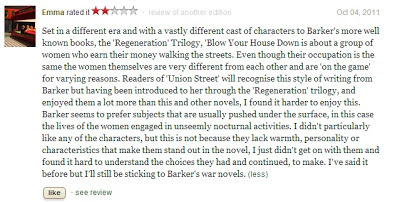 Click it to increase the legibility. This review is just another superlative example of poor reading. This reader didn't like the characters and thus didn't like the book. She misses the point of the novel by referring to the women's profession as "unseemly nocturnal activities". The very fact that she encodes prostitution in this way speaks to the uncomfortable relationship that the middle and upper class has with prostitution. Blow Your House Down is about naturalizing the profession and humanizing it, not entertaining the reader with "warm" characters. Ugh.