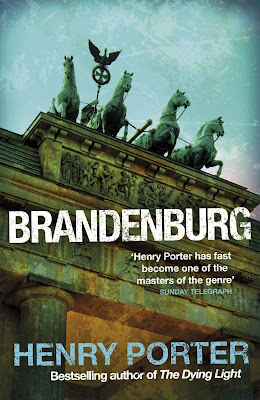 Despite the fact that I lived through the fall of the Berlin Wall and the reunification of Germany, I remember nothing. I was 5 years old after all. However, representations of this momentous occasion in 1989 are minimal compared to countless other 60s examples of a divided Berlin. Earlier this year I read Funeral in Berlin by Len Deighton which was a marvelous little thriller and this is an excellent comparison with the much longer and much less effective Brandenburg by Henry Porter.

I suppose that my years of reading higher quality literary fiction (whatever that means) has spoiled me for prose and characterization. Porter's entire cast is egregiously flat. Not a single person stands out — not even the protagonist, a quiet art historian who is being extorted by East Germany's secret service into espionage. He is playing a careful game of double agency with a coalition of various Western secret services including MI6. He goes through the entire novel, motivated by his twin brother's unfair imprisonment, without lifting off the page and into the imagination. This is partly due to Porter's tendency to tell rather than show throughout the text. Porter's flat journalistic prose carries the deft plotting but leaves any dimensionality behind.

It's a shame, of course, because Porter's plotting is quite good, up until the very end. The timeframe of the novel begins weeks before the ninth of November and predictably comes to a climax at the fall of the Wall. Even with this predictable logic, the plot twists and turns until the end, when the reader is swept up in the excitement and power of the massive crowds pushing and pulling for freedom from state oppression.

The denouement of the novel cries out for some editing — a plot twist at the very end should have been excised without a second thought. The forced happy ending is ridiculous and offensively left field, which is all the more disappointing considering the natural happy ending that occurred previously, with the fall of the wall.

Despite these criticisms, I still enjoyed the novel, especially the spycraft and complexity of the plot. I'm not sure if I'll read another Porter novel, but I'm glad I read this one. 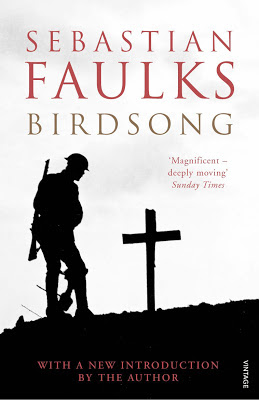 The Great War looms heavily in my imagination for reasons that I can't quite put my finger on. One of the factors in my interest is that my great grandfather fought in the war and managed to survive. Although he never once spoke of what he saw and what he did. This is echoed in Faulks's long and emotional text Birdsong.

Stephen Wraysford falls in love with Isabelle, an unhappily married French woman. They run off together, but their happiness falls apart. Then, Stephen enlists to fight in what was assumed to be a quick jaunty war. The novel follows Stephen through a series of monotonously horrible sequences in which Faulks demonstrates his research capabilities. Each scene in the war is visceral, awful, and in many cases, nauseating. The filth, the lice, the sounds, the blood, the arbitrariness of life and death are all detailed in exhaustive detail. The accumulative effect is to show the disillusionment of the men and how they are irrevocably traumatized.

Woven through the narrative is a secondary story that follows Stephen's granddaughter, a middle age professional romantically entangled with a married man, as she investigates her family background. These scenes are inevitably the weakest, as they provide Faulks with the opportunity to moralize on the forgetfulness of the collective consciousness. Elizabeth, the granddaughter, is given no motivation for her interest in the past until close to the end, when she arrives at the "moral" of the story: our lives are meaningless and empty compared with the soulful sacrifice of our enlisted men during the War.

The structure of the novel brings to mind the far superior and more inventive novel The Wars by Timothy Findley. Similarly, a sensitive young man (they all were) loses his humanity during the war, but regains it in a transcendental moment. The structure of the novel has an unknown researcher assembling material on this young man and his actions during the war, reflecting on the current era's meaningfulness in the face of this experience. The great difference between the novels is multiple: The Wars is complex and postmodern, the transcendental moment's logic is based on how we treat animals better than ourselves, and The Wars questions historical objective truth by way of its structure.

As aforementioned, the weakest parts of Birdsong are the scenes set in the 1970s, when Elizabeth tries to make sense of her life through the appropriation of Stephen's experiences. Meanwhile, in the past, Stephen goes through long and torturous ordeals in which his very humanity is slowly scrubbed away. The romantic aspect of the plot figures only slightly, despite how the novel and TV show are advertised.

I can totally understand why Birdsong has the critical reputation it has. It's a forceful, evocative and well researched text. Its characters are extremely well drawn and so disconcertingly human. However, it's a rather old fashioned novel in the sense that the narrator is stupendously omniscient and at no point is there is any depth to the ethics other than "war is bad" and "the brotherhood of man is awesome". This is a novel to teach in first year English, if it weren't so preposterously long. Of course, this doesn't mean that the novel is bad. The emotion palette with which the novel paints is extremely successful, more so than Findley's antiseptic The Wars.

Despite the emotional achievements of Birdsong, I don't think it's all that great, to be honest. I could have happily cut 150 pages from the novel and that doesn't even include the ponderous sections in the 1970s. Without these cuts, Birdsong is good, but not great. I could rightly be accused of being disingenuous about this, considering I read the 500 page novel in less than 48 hours. So there's that to think of.
Posted by matthew.