The Plague of "Nice Guys" 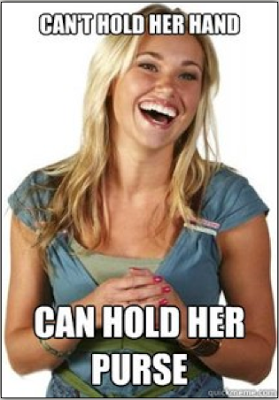 One of the most common memes being circulated in the current era is the idea of the friend zone. There's an image macro called "Friend Zone Fiona" that riffs on the idea that women are callously putting nice guys into what's called the friend zone, an area clearly demarcated as non-romantic and non-sexual. The oft-quoted scenario is that the male does nice things for the female romantic target in order to prove worth, to show romantic interest, and most importantly, to convert this behaviour into a romantic relationship. Once the male "bravely" announces his intent, the female's response is inevitably "oh, but I like you as a friend and I don't want to ruin our relationship." This sends the male into a cycle of resentment and blame, focused on the female for rejecting the male's (unwanted) romantic/sexual advances. The male turns to the Internet to vent and finds a large group of men in similar positions to reciprocate the expressions of frustration. The friendzoned nice guys always complain that they're different, they're nice guys, they deserve companionship because they're different, and they consistently observe that girls date asshole, then turn around and complain about those assholes. The self-described "nice guys" are — plain and simple — misogynists and sexists and I hate them. 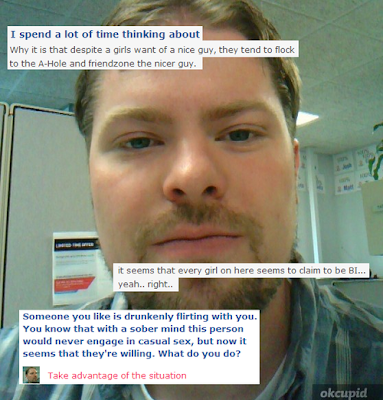 Nice Guys of OKCupid is the Tumblr I have been waiting for. It's a collection of pictures of men on the dating site who have described themselves as nice guys. Inevitably, the quotes of self-description are paired with quotes that reveal the nice guys to be misogynists or sexist. The picture I've posted above is a perfect example of this. The nice guy admits to rape, although he would never even think to call it rape. There are other examples where gentlemen refer to themselves as feminists, but think that females have an obligation (moral? social?) to shave their legs. In another superlative example, one nice guy admits that female homosexuality is tolerable but male homosexuality is "just wrong."

There is a plague of nice guys out there and it would be my pleasure to either a) find someone to educate them on discourses of gender and sexuality or b) kill them all with fire. These are the type of people that peacefully and without irony consider themselves superior examples of masculinity. They believe they are enlightened. They believe that "assholes" and "douchebags" are "getting" all the girls and leaving none for them. The nice guy phenomenon is both a confirmation of the patriarchy as well as an hysterical reaction by the patriarchy when females appear to have the ability to choose. When females seemingly have the opportunity to select their own mates — thanks to a combination of increased economic power as well as equalizing social mores — they are subsequently threatened because they aren't selecting the mates that men have designed for them.

In other words, females are damned if they do and damned if they don't. If females do not choose the nice guys and reward them for their behaviour, they're bitches who deserve the assholes they choose. If they do choose the nice guys, the females are essentially rewarding nice guys for their misogynistic behaviour, which allows these nice guys to perpetuate the behaviour. The anxiety of choice rears its terrible unavoidable head again.

Increased economic power and the decay of outmoded social mores appear to be a mixed blessing for females. In most cases, it's an infinitely positive thing, allowing for individual humans to be treated like humans. In other cases, women are pretty much blamed for the disintegration of society. Nowadays, the blame for the death of society is dispersed across a wide spectrum, touching feminism, homosexuality, and liberalism. It's disconcerting but not surprisingly that the three elements are fundamentally about equality.

Nice guys subconsciously despise equality. Firstly, equality disrupts their hegemonic status. Nice guys are generally white privileged males (such as myself) but see themselves as normal, above-average intelligence, socially progressive and enlightened to the plight of females. However, in reality, their conception of socially progressive only extends to rights that effect them personally. More often than not, male homosexuality is misunderstood, barely tolerated, or outright feared. They applaud moderate or misidentified feminists but shun and ridicule "extremist" feminists, AKA feminazis who hate fun and hate men.

The equality that social movements are fighting for literally disturb the privilege that these nice guys enjoy. Thus, it's extremely discomforting when that privilege is challenged. Hence, the vociferous outrage and defensive reaction when somebody accuses a nice guy of being a misogynist or racist. "But I have plenty of black/gay/female friends!" goes the oft-heard defense. Of course, this defense is absolutely specious. Having a friend that condones or tolerates intolerance does not exculpate from general intolerant ideologies or behaviour.

The second reason why nice guys subconsciously despise equality is that this much sought-after equality provides females with greater power: the power to choose, the power to self-sustain, the power to act in self-interest. Many of these things mean that — sorry nice guys — females just won't choose them. Perhaps females aren't interested in crypto-misogynistic creeps that see every female as a romantic target, someone to convert polite social behaviour into sexual rewards.

The hysterical reaction to any disruption of the social status quo — ie providing other humans (females) with human rights (right to choose sexual/romantic partner) — is to malign or mistreat that very disruption in an attempt to reassert power within the dynamic. The patriarchy's power is being only slightly challenged so the patriarchy responds disproportionately with an entirely new subset of social protocols that females are unable to navigate with success. The nice guy phenomenon is essentially the Kobayashi Maru of romantic choices.

Of course, as aforementioned, this increased power of choice is good, but not all pervasive. Females are still subject to a loathsome discourse of slut-shaming, casual and institutional misogyny, and a culture that circulates and perpetuates all sorts of unrealistic and unhealthy imagery related to the female body. The most pernicious and disturbing element of human existence is to correlate the female's worth with her body and not her personhood in totality.

I suppose what offends me most about the nice guy plague is that the nice guys are reducing and flattening a complex set of social protocols into a crude economic exchange. It's Bourdieu's social capital but instead of relating to class and economic status, it relates to the ability to capitalize on the economics of the female body.

Essentially, the nice guy logic is as follows: the nice guy's behaviour (which is standard non-zero sum behaviour) accrues interest in the female body until at the point when the nice guy is able to capitalize on the savings and convert them into a romantic or sexual relationship with the female body. The nice guy negotiation is strictly economic in the sense that this behaviour has a convertible liquidity, to be exchanged with sexual favours or romantic interest.

The hysterical reaction by the patriarchy is to again reduce an entire human into a body with holes that can be used by whomever is clever enough to bank responsible behaviour.

When confronted by a nice guy who has performed a series of nice guy tasks for the sake of future conversion, the recipient of said behaviour must ask why should they reward somebody for doing the bare minimum of being a human being. Why the fuck should nice guys feel special for basic human decency?

Oh the irony. Of course, nice guys are accomplishing altruistic deeds because they are hoping each deed accrues interest for future convertibility. This is why they are a plague: because they perceive themselves as enlightened or superior to the basest male due to their incredible ability to not being a huge douchebag 100% of the time.

At this point, it's a cliché to even write this post. Many people circulate the belief that "nice guys finish last" which in turn feeds the circulation of the nice guy martyrdom which then in turn circulates the backlash against the nice guy plague. The only solution? Kill them all with fire or find somebody with enough knowledge and experience to educate them all on dynamics of gender and sexuality. I still have a lot to learn, so I'm not the appropriate man for the job.

Not only that, but I'm certainly guilty of the casual and institutional misogyny that perpetuates the reduction of female personhood into nothing more than the body. The goal here isn't to feel guilt and shame over decades (hundreds of years) of social and cultural programming but to become aware of it, to acknowledge that females are treated poorly globally, and to help advance any and all forms of equality for the betterment of all people, not just those that would benefit from privilege. Dynamics of power and gender structure our daily life in ways that are often to subtle for the unaware, the uninitiated, ie the nice guy. It's time to take responsibility for our actions and understand that our behaviour vis-à-vis sexual economics is unacceptable. A person is more than simply a repository for banking decent actions for the purpose of capitalizing in the future.

A lot of the times, this acknowledge of privilege means shutting the fuck up. However, there are instances, such as when nice guys spout their misogynistic bullshit, when one has a moral obligation to speak out.

Let your voices ring out loud and clear: misogyny is fucking unacceptable.
Posted by matthew.