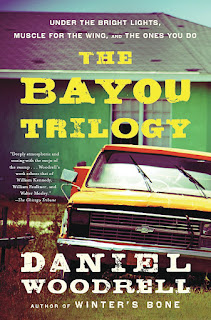 Daniel Woodrell’s The Bayou Trilogy counts as one novel or three? In my Goodreads days, I would have been concerned with making sure everybody knows that I read three distinct discrete novels. But those days are behind me, and my anxiety around the quantity of books I read has diminished, but not disappeared entirely. With this in mind, I read Woodrell’s Bayou Trilogy in three days, despite it being an omnibus (my favourite way to read a book, to be perfectly honest). Not only did I read it so quickly because it’s noir, but because Woodrell manages a level of technical skill that improves with each novel. Thus, it’s an enlightening experience to follow an artist’s development so closely so rapidly.

The Bayou Trilogy, consisting of Under the Bright Lights, Muscle for the Wing, and The Ones You Do, follow (ostensibly) Rene Shade, detective in small town Louisiana, close to New Orleans. All three novels were published long before Katrina irrevocably changed the metropolitan and surrounding landscape, but this does not mean the novels are innocent or naïve in the face of an oncoming storm. Rather, the trilogy is a series of hardboiled adventures that unflinchingly catalogue the worst the criminal sphere has to offer, while simultaneously observing the difficulty of recognizing the encroachment of that very sphere on “civilian” lives. If there exists a grand unifying theme, it’s the insolubility of differing public spheres. Rene’s childhood friends went on to be criminals, bartenders, snitches, enforcers, public officials, lawyers, construction workers, etc, but all mingle and communicate within the same geographic area they grew up in. This theme comes to a head in the last novel, when Shade’s drifter father returns to town, on the run from “the one guy you don’t want to fuck with.” Shade’s father stirs up the animosities previously buried and opens up old wounds.

The three novels, while concerned with these complicated feelings and histories, still retains that sneering attitude that all good noir has, along with a healthy dose of bracingly honest violence, similar to McCarthy’s depiction of action. The dialogue, probably the most important element of noir, absolutely sparkles with wit as well as verisimilitude. Woodrell manages to straddle the line between entertaining and honesty when portraying his cast of Southern people. There’s a risk with noir’s sneering attitude that Southern stereotypes could rear their ugly and unwanted head, but Woodrell achieves the difficult task of empathizing with the poor, the downtrodden, the stupid, the lame, while simultaneously managing to be entertaining. It’s a tough act, but Woodrell succeeds.

The first novel is the weakest, no doubt due to Woodrell’s inexperience. But despite this, Under the Bright Lights manages to be stronger than most debuts if only for Woodrell’s sense of haunting detail, of exquisite specificity to engage the reader. The novel suffers from poor pacing and a bit too much sneering; it’s unrealistic that a cop with Shade’s attitude would be given high profile cases considering his criminal family. However, things pick up immensely with the second, Muscle For the Wing. In this novel, a white supremacist group has been robbing the wrong poker games, and a hitman has been released into the town in order to dispatch these racists with Shade being inexorably drawn in. It’s a superb masterpiece of pacing and has some of the most visceral violence I’ve ever read, but without ever coming near the border of gratuitous. The third novel is, technically speaking, the best, as it grapples with themes and ideas better than the two previous novels, but it lacks the same energy and fails to grab this reader as strongly. Despite this, Woodrell’s Bayou Trilogy was an immense pleasure to read, enough that I quickly laid my hands on his other novels. 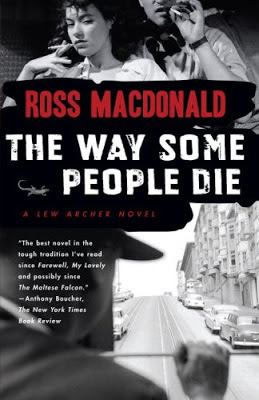 The Way Some People Die is my third Ross MacDonald, after reading two of them back in 2010. I’ll be perfectly honest — I don’t remember reading The Doomsters at all. I read both of my reviews for MacDonald, in light of finishing what was only his third novel, and frankly, I’m embarrassed by my poor critical skills. I chastised the novels for not matching my expectations, a not wholly fair criticism. The Way Some People Die, in many ways, improves on my experience with MacDonald while simultaneously fulfills my criticisms from two and a half year ago. By this, I mean that obviously my tastes have changed, but MacDonald hasn't  so it’s an interesting tension that I like this novel while not liking the others, despite them being practically the same. All three novels are so thematically and technically similar as to beg the question of why bother reading any other MacDonald? Of course, the answer lies in that the actual experience is pleasurable, similar to reading Elmore Leonard. Once you've read one, you've kind of read them all, but that doesn't stop you from reading them.

MacDonald’s The Way Some People Die is interested in representations of geographic space and its correlation with class status. Like all good California noir, the protagonist spends the bulk of the narrative traveling back and forth, negotiating differing social protocols depending on the class of the communicating subject. Marlowe and Archer, along with a multitude of other private dicks, are purposefully set outside these overlapping spheres in order to maintain a sense of objectivity. The protagonist’s outsider status allows him to observe, evaluate, and diagnose. The key difference between Marlowe and Archer is that MacDonald is more interested in the tensions between spheres rather than their impact on the protagonist. Archer is meant to be a cipher, compounding the outsider status, enabling MacDonald to observe more intricately the social classes. Superficially, this novel is about a missing daughter married to the wrong guy who stole something from “the one guy you don’t fuck with.” Archer traipses across coastal California, putting together an overly complicated scheme that ties a large cast together. The disparity of the social classes of the cast is what allows for the tension within the narrative.

Returning to my initial point, I’m unsure if I like this novel more because I’m a better reader or if indeed this is a better novel than the previous two. The Way Some People Die is an excellent, if by the numbers, genre exercise. It doesn’t aspire to be great literature, but like all cultural artifacts, it does manage to say something about the world it means to represent. It is the responsibility of the cultural critic to observe, evaluate, and diagnose this action in motion. 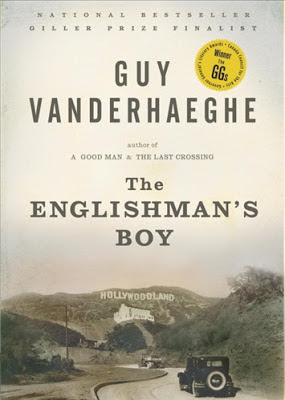 Guy Vanderhaeghe's The Englishman's Boy is one such novel. What starts out so strongly turns out to be an extremely frustrating read, not strong enough to love, and not weak enough to hate. The promise of the premise never lives up to the novel, but alas there are moments that threaten to raise the book from good to great.

The novel is made of two unequal halves. The primary narrative follows Harry Vincent, unimpressive and nebbish title card writer in Hollywood, 1923. He is hired by mysterious reclusive studio owner Damon Ira Chance to get the life story from a real cowboy, a real American, in order to produce a historical epic that elevates American cinema into the upper echelons of art. Harry is tasked with tracking down and then interviewing Short McAdoo, a renowned reclusive cowboy with a mysterious past who is secretly Canadian (irony!). The second, better narrative follows the unnamed servant of an Englishman who leaves his employer (dead of fever) to join a posse of cowboys looking to get back their horses, stolen from Indians. Thus, The Englishman’s Boy is a novel made up of a detective story and a Western. But what makes the detective story so interesting is that it investigates and interrogates the Western, while the Western half of the novel serves to problematize our Romantic notions of the cowboy and its correlative myths. The promise of this novel is that it will destabilize genre as well as questions of nationalism vis-à-vis the great American movie is built off the back of Canadian laborers.

What makes this novel so disappointing is the heavy-handed nature of the twin narratives. The current political paradigm in historical fiction is to expose traditionally hegemonic structures as corrupt or racist. Thus, it’s no surprise when the studio head and his underlings turn out to be frothing-at-the-mouth anti-Semites or that the gang of cowboys end up gang-raping a fourteen year-old Indian girl. In this novel, the bad guys are clearly marked by their hegemonic status while good guys are those sweating away under the boot-heels of stronger men. Shorty, the only interesting and complex character in the novel, challenges this paradigm by being a part of both narratives. It should be no surprise that Shorty is, in fact, the Englishman’s boy, and a well-developed, nuanced character. He’s done some terrible things, but not really, because he tried to protect the girl when she was being gang-raped. He lives with his past until Harry drags it back to the surface.

The metaphor is clear: the novel is revisiting traumatic moments in history in order to bring them to light, to refuse cultural amnesia, to remind us of our dark pasts. I just wish Vanderhaeghe didn’t have to deploy long speeches from characters in order to make this point. Harry’s Jewish platonic friend Rachel is disposed to making grand speeches chock full of meaty historical details in order to show that the author did copious amounts of research (a rather tedious habit of historical fiction writers). She name-checks dozens of famous Hollywood people from the early days and every time, it sounds flat and unrealistic. Almost every line of dialogue in this novel falls flat from the page, lifeless and obtuse. The speeches don’t stop with Rachel, either. No, the reader endures even longer, more tedious speeches from Chance, the racist studio head in order to demonstrate that structures of power control what information is transmitted through time. If I were a more generous critic, I’d think Vanderhaeghe was reaching for Ranciere’s distribution of the sensible, but I don’t think the author is that theory-savvy.

This is why The Englishman’s Boy remains so frustrating as an experience. There are lots of elements that are interesting, intriguing, and intelligent, but they are buried within obvious hysterical gestures so that the reader, any reader, will comprehend. I quite liked the beginning of the novel, as Vanderhaeghe takes his time with the setup, but once the plot slowly creaks to life, the next two hundred pages are a slog of repetition and speechifying. Only the bloody, almost McCarthy-esque ending recuperates the novel from awful to good. At no point does the novel ever achieve greatness, despite its stellar structure and complicated theorizing. I want to love this novel, but I just can’t. The Englishman’s Boy will always be a novel that I prefer talking about rather than experiencing.