The Media and Tragedy

Helicopters beat noisily over the air, hovering over the school in Monroe, Connecticut. Their cameras, attached to the side, pensively peer downwards, capturing onto digital film and broadcasting to millions the images of children crossing the police barricade. Yesterday was the day elementary schoolchildren return to a pale imitation of a regular life, as the school in Monroe, about seven to eight miles from Newtown, was set up and decorated like Sandy Hook in order to welcome the students. The first day was probably arts and crafts, or music, or anything light and participatory. Parents were welcome to attend, as today was not just about returning children to normalcy, but helping parents let go of their little ones, back into the relatively safe arms of the school.

Today was ostensibly about returning children to a normal routine, back to their regular lives. But how could this be successfully accomplished when the helicopters film their arrival at school, when they film the police barricade, when the TV personalities on the ground are searching for somebody — anybody — to provide some information on feelings. As if the parents feelings weren't painfully obvious.

In Sandy Hook, nothing like this had ever been seen before. In living memory in the United States, nothing like this had been seen before. Thus, there is no "playbook" or set of protocols to deal with tragedies on this scale. However, one can say with some confidence that part of the healing process does not include having a microphone and a camera shoved into one's face.

The secondary lesson to learn from this school shooting (the first being the US's outrageous ease of access to fire arms) is that the media needs an overhaul. Already journalism is in a precarious state due to the death of print media, newspaper closures, and a paradigm shift that moves the focus from news reporting to confessional memoirs and personal essay. Thus, journalism needs a new paradigm, or better yet, a return to an era when fact-checking, objective reporting, and moral responsibility are paramount.

The catalogue of things that the media got wrong during the month after Newtown's tragedy is a long one. From the very beginning, the media reported breathlessly on misidentified shooters, the amount of victims, the motives, etc. They also, without any self-awareness at all, posted pictures of children being led out of the school, their hands clasped to their faces. They posted pictures of anguished family members. They posted pictures of police officers, EMTs, teachers, and other figures to visually represent the chaos and tragedy that was unfolding.

I resolutely refuse to re-post the pictures from that day, or any other picture from Newtown. I refuse to partake in a type of journalism that outright profits from the "if it bleeds, it leads" psychology of journalism.

Major news outlets were reporting almost instantaneously that the 24 year old brother of the shooter was involved [I refuse to write the name of the shooter or his family]. This is possibly due to the social media style of journalism that the market has created. In order to keep audiences, to report first on things, outlets are willing to risk truthfulness. They are willing to gamble credibility in order to maintain viewers and readers.

Journalism holds specific ethics in mind at all times: report the truth, protect the source, do not compromise, and above all, maintain credibility in order to report the truth. By compromising their credibility, the major outlets succumbed to a fever of profitability over reputation. In order words, with the 21st century, journalism has finally become a fully fledged victim of neoliberalism, the hysterical need to maximize short term profits even with the risk of long term damage. Only immediately actualized capital is accepted; all else disturbs the shareholders. 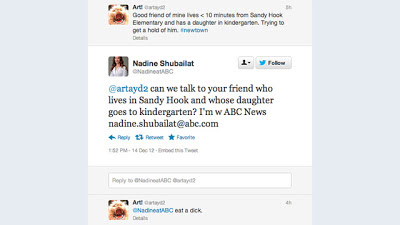 Gawker reported that an ABC reporter reached out to a Connecticut resident for an interview during the most chaotic time. The reporter was rebuffed with a terse "eat a dick." This exchange perfectly captures the buzzard-like propensity of the news outlets to get a story, any story, when newsworthy items occur. The current paradigm of the media is never satisfied until the carcasses of people have been picked clean, until the bones of human beings sparkle brilliant white.

Nadine Shubailat, the reporter in the above exchange, is no more to blame for this style of journalism than a US soldier is personally guilty of imperialism. Both are simply individuals in a particular discipline in which anybody could be replaced with another and achieve the same reprehensible behaviour. It's not Shubailat's fault that she needs to pin down a source, to get an interview, to get any information. In fact, that's basic journalism. However, it is the system's fault that Twitter is being ruthlessly exploited for callous interviews with people who are still searching for their loved ones.

Do we really need to interview 9 year olds who were at the scene? What possible information could they give that outweighs the trauma of "psychological debriefing" via interview. In a cost-benefit ratio, surely, the interview costs more than the meager info the 9 year old could possibly provide.

Psychological debriefing is a specific treatment that emphasizes on-location, immediate counseling and interviewing in order to offset post-traumatic stress disorder. Normally performed by trained therapists, debriefing occurs when the media asks interview subjects to re-experience trauma by externalizing it. Numerous studies have found that psychological briefing, either immediate or afterwards, lacks in efficacy and does not deter PTSD. In some cases, as in meta-analyses of 9/11 counseling show, individuals wouldn't have developed PTSD without debriefing. Thus, the evidence for the efficacy of debriefing is sorely lacking.

Thus, it's not hyperbole to say that by interviewing subjects so soon after a traumatic experience, journalists might actually be contributing to post-traumatic stress disorder by exacerbating or even developing the very conditions. Then, this violates one of journalism's very tenets of ethical behaviour: protecting the source.

Of course, the prevalence of misinformation, poor interviewing techniques and naked opportunism are all related to the confusion and chaos surrounding such a complicated event. Such things are almost inevitable when so many news outlets, so many individuals, and so many complex factors are engaged. The more complex a system, the more likely are anomalies. However, there is a line of acceptability in terms of the aforementioned slips.

It is the responsibility of journalism to report on such events, and I would be insane to think otherwise. But I would be remiss in not pointing out that helicopters filming children on their way to the first day of school does not contribute to the attempt at normalcy in which the school is engaged. It is the responsibility of journalism to get the facts straight, and if law enforcement at the scene is providing the incorrect name of the shooter then perhaps this could be forgiven. However, the source didn't tell the media to report that the shooter was definitively this person or that person. The media could have — and should have — couched that identity in language of possibility.

The media did not need to take photos of the children as they marched out into the waiting arms of the police. And if they did take that photo, it didn't need to disseminate so breathlessly, so gleefully.

It's hard not to get the impression from the current paradigm of journalism that they welcome and hope for tragedy. After all, the "if it bleeds, it leads" is an old habit that becomes intensified when the competition for a reader, any reader, is so high stakes. There are fewer journalists working now because newspapers are collapsing, outlets are being downsized. Their jobs have become lost due to the imperatives of free market capitalism: profit or die.

Edward S. Herman and Noam Chomsky wrote an incredibly provocative book called Manufacturing Consent: The Political Economy of the Mass Media in which they argued that journalism has become a tool of the US government, due to the rapacity of neoliberalism and the rise of corporatism.

This book argues rather convincingly that this has been the case since the early 1960s, when the US government's foreign policy was at its most aggressive. By reporting positively on US client states and negatively on US enemies, the mass media has already traded in their credibility for profitability.

Thus, it should be no surprise that the current paradigm of journalism is so utterly reprehensible.

The question remains, what do we do about the current state of journalism, a discourse that focuses on capital over truth? The answer is built into the premise of the question. We need to de-emphasize capital in the equation of journalism. No longer should newspapers and media outlets be primarily (and sometimes solely) motivated by profitability. Of course, the outlets are not focused on maintaining solvency will collapse, sink, or dissipate due to the rigors of free market capitalism. Only by reporting on that which sells, at the fastest speed, at the lowest cost, will a media outlet survive. This is capitalist realism at its finest.

It's impossible to imagine a new paradigm of journalism because the greatest trick capitalism ever pulled was to convince everybody that there is no alternative. We can't imagine a mass media that doesn't ruthlessly exploit the imagery of tragedy, the victims of tragedy, and the compulsion to return, over and over, no matter how damaging the hovering helicopters might be.

Thus, we must look to the great wilderness of the Internet for the future, where news outlets aren't limited by word counts, by size, or even by imagination. Anything is possible and anything can be reported. By responsibly using a matrix of social media, traditional sources, governmental sources, Internet journalism could succeed in accomplishing the lofty goals of institutional responsibility.

Due to capitalist realism, we might have reached the end of journalism. Its malodorous corpse will forever remain stagnant at the end of history. Until a paradigm shift is imminent, we'll be forever bombarded with images of tragedy that need not be circulated, with names of shooters that don't deserve to be repeated, with cringe-worthy moments of naked opportunism, with helicopters, beating constantly against the waves of credibility.
Posted by matthew.