The previous book review round-up was fiction, while this one is entirely non-fiction. Since I can't be arsed to write long reviews of each them, as I'm currently swamped with reading/writing/marking, here are capsule reviews that surely do not do justice to the books. 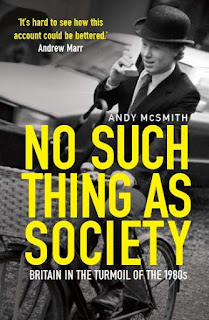 No Such Thing as Society

Andy McSmith's history of Britain during the 1980s is equally fascinating and frustrating. It's clearly meant for an audience already familiar with the people, topics, and backstory, which is something I'm often looking for in non-fiction. However, in this case, the book's lack of hand-holding is somewhat exclusionary. I appreciate McSmith's organization of history around themes rather than linear chronology, but it does get a bit confusing when there is such obvious skipping around. I quite liked the book, and it helped orient my thinking around particular British subjects such as Thatcher, Live Aid, and the mining crisis of 1984. Perhaps it's due to my birth year, a total accident of course, but I find myself intrigued by the 1980s as a periodizing category. McSmith's book does a fine job of helping to fill in some of the blanks of my own memory. 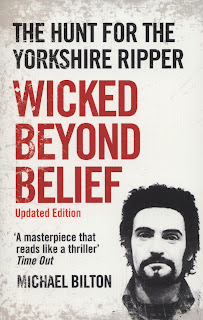 The Yorkshire Ripper is something that has fascinated me for a long time, especially after reading David Peace's Red Riding Quartet. Michael Bilton worked as a journalist during Peter Sutcliffe's activity as murderer and rapist and thus he has an excellent grasp of the people, the culture, and the institutions. Though, as a journalist, Bilton is suspicious of ambiguity or subtlety, and announces his book's theme at every occasion. What is the lesson of the Yorkshire Ripper's continued legacy but one of the utter failings of a matrix of institutions? Almost at every turn, the police, the media, the government, and other systems failed to protect the very citizens they are sworn to serve. It's a depressing yet utterly captivating portrait of a police investigation before the rise of digital record-keeping. Bilton's long addendums (coming after a decade in print) are helpful illustrations of the power of DNA testing, stubborn investigatory labour, and governmental inquiries to prevent further serial killings of this magnitude. I thoroughly enjoyed Wicked Beyond Belief, if enjoyed is the correct word for such an exhaustive and exhausting experience. 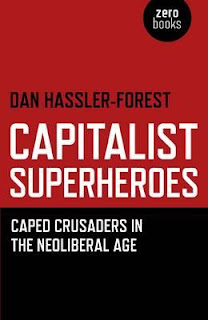 Dan Hassler-Forest, the author of this work, and I have enjoyed a Twitter friendship in the months since I heard of his book's publication from Zer0 Books, producers of consistently fascinating works such as Nina Power's One Dimensional Woman and Mark Fisher's Capitalist Realism. This particular volume, much longer than others in the series, focuses on the Zizekian idea that within cultural objects, ideology is no longer hidden, waiting to be examined, but rather dispersed across the surface. Superhero films are the objects of interest in this particular discourse, as Dan skillfully and perceptively manipulates the objects to reveal their surface-level ideology. Dan provides a concise history of the intersection between neoliberalism and culture while demonstrating what nonsense we swallow and clap for with each subsequent superhero film. The only negative thing I can say about this book is that this volume is rife with typos as well as an egregious gap in the bibliography. But this is something that can easily be fixed in a second printing, so I can't hold back my praise because of it. 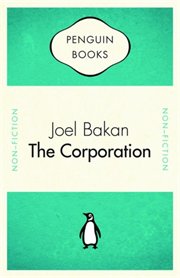 Joel Bakan gave a speech at my university a month or so ago and I missed it due to sheer laziness as well as unfamiliarity with his work. I fixed this by reading Bakan's nonfiction exploration of corporations. He traces their history and the absolutely bizarre phenomenon of anthropomorphizing these corporations while simultaneously accepting this very fact as logical. In fact, the thesis of Bakan's book is to argue that corporations are intrinsically sociopaths and are actively damaging society. In order to demonstrate this, Bakan takes the legal personhood of corporations as logically sound. It's obviously a bit of a stretch, and I had no need of such logical back-bending to be convinced of corporatization's danger. Otherwise, The Corporation is rather enjoyable read but this is a bit of confirmation bias. I don't read books that are ideologically opposed to my own views, so I am dangerously close to the type of isolationism policy that I accuse right-wing thinkers of adopting.
Posted by matthew.