Too late to re-stage the play: the rise of irony and the fall of prog rock

Marillion is an English rock band formed in the late seventies, just when prog rock was winding down as a genre. In 1979, the year Marillion formed, Pink Floyd released The Wall, Supertramp released Breakfast in America, Electric Light Orchestra released Discovery, and in the last month, The Clash released London Calling. Prog rock was turning culturally irrelevant with the rise of punk rock and hardcore punk such as Black Flag (their debut EP was released in 1978) and The Dead Kennedys (who formed in 1978). Despite prog rock's decline, Marillion released four concept albums in a row, starting with their debut, Script for a Jester's Tear. As the 1980s drew to a close, Marillion's lead singer and lyricist, Fish parted ways with the band. Steve Hogarth was hired to replace him, marking a distinct change in the band's direction. Where Fish's lyrics were dense with allusions, alliteration, and painfully earnest, Hogarth's verses were simpler and often laced with contemporary references. The band's career can be neatly divided in two chapters: the Camp era of Fish and the ironic era of Hogarth. The rise of irony as a dominant mode helped nail prog rock's coffin.

In her essay, "Notes on Camp," Susan Sontag writes that camp "is not a natural mode of sensibility, if there be any such. Indeed the essence of Camp is its love of the unnatural: of artifice and exaggeration" (275). Camp is a sensibility that is difficult to point to, and difficult to discuss. It takes the deathly serious and turns it "frivolous" and "depoliticized" (276, 277). Most Camp objects are unnatural and emphasize their unnaturalness because "nothing in nature can be Campy" (279). Using the example of Art Nouveau, Sontag argues that the art style is "experienced as Camp" rather than simply "is Camp" (281). Rather, Camp is a lens through which objects are perceived. Objects are that are unaware of their Campiness are more satisfying than objects completely conscious of Camp. Naive objects, such as Fish's earnest, emotionally honest lyrics, are essential in their seriousness. The naive Camp object has "the spirit of extravagance" (283) such as the cover to Marillion's debut album, featuring a crying jester. 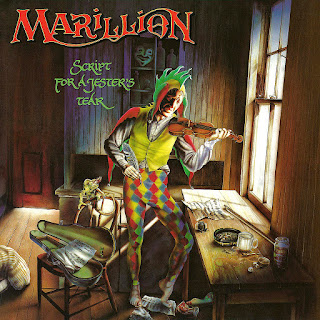 Marillion's early work with Fish are entirely examples of "art that proposes itself seriously, but cannot be taken altogether seriously because it is 'too much'" (Sontag 284). The art style of the albums, the aggressively epic song lengths, the lyrics that cry out with full intense emotion are all indicators of Fish's tenure with the band. In the debut single, "Script for a Jester's Tear," Fish sings:

Emotional suicide, silent screams, broken dreams are all examples of high seriousness but without any self-awareness. Fish's lyrics point to pure unmediated emotional honesty, without the shield of irony to protect from cynicism. It is the very lack of irony that helps push Marillion's stubborn hold onto prog rock into the realm of Camp.

As prog rock's career trajectory entered into its descent, Marillion's style becomes all the more campy. With more time separating the perceiver and the object, detachment grows or "we become less involved in them" (Sontag 285). The band's wistful nostalgia and painful honesty becomes tolerable once prog rock has laid to rest and irony has become the dominant mode. Marillion is perceived as Camp and becomes palatable despite its extravagance and extraordinary lyrics, "extraordinary in the sense, often, of being special glamorous" (284).

What makes "Script for a Jester's Tear" especially interesting is that the speaker is portraying a character, the titular jester. The song features, then, multiple layers: Fish performing a performer. While this type of self-reflection normally engenders detachment in the listener, such as the mode of metafiction in postmodern literature, in this particular case, the layers resist any emotional distancing by insisting on the emotion. It is as if the jester is no longer the poetical speaker but rather Fish himself is the jester. It is the "glorification of character" where "character is understood as a state of continual incandescence — a person being one, very intense thing" (Sontag 286). Despite its metafictional layers, the subject of "Script for a Jester's Tear" remains Fish, rather than the speaker.

When Steve Hogarth joined the band, the lyrics became less filled with literary allusions, less dense and loquacious, and more often than not, detailed multiple subjects. Rather than high medieval fantasies or high class garden parties or epic length poems on Grendel, Hogarth's lyrics almost exclusively examine relationships, either of their deterioration, their sabotage or their banalities. In 1995's "Cannibal Surf Babe," the speaker depicts a relationship between the speaker and an aggressive female surfer:


Singing: I was born in nineteen sixty weird
And I'm your nightmare surfer babe
Mr. Wilson where's your sandbox and your beard
'You still looking for the perfect microwave?

The lyrics are much simpler, less wordy, and not nearly as direct. Rather that deploy over-the-top references to jesters or suicide, the speaker allows the emotions to come through by oblique irony. The nebulously defined 1960s are flattened and reduced to a cultural referent, rather than the realistic depiction of a complex period of time. This ironic move mirrors what Fredric Jameson calls "the nostalgia mode" and what David Foster Wallace refers to self-conscious irony. Much like American "hyperrealism," Hogarth's irony-laden lyrics use products, objects, and cultural referents to sustain a particular emotional tone rather than Fish's direct address. As Wallace writes in his essay "E Unibus Pluram":


In fact, pop-cultural references have become such potent metaphors in US fiction not only because of how united Americans are in our exposure to mass images but also because of our guilty indulgent psychology with respect to that exposure. Put simply, the pop reference works so well in contemporary fiction because (1) we all recognize such a reference, and (2) we're all a little uneasy about how we all recognize a reference. (Wallace 166)

Like the many examples of postmodern art in Wallace's essay, Hogarth's lyrics rely on the ironic detachment of the listener in order to achieve an emotional tone. If Hogarth had not couched emotional language in references and irony, the lyrics would closer to a direct address, which does not fit the dominant mode. Wallace charts the dominance of irony with the rise of television as a medium. TV internalized the self-conscious unblinking gaze of the audience and presented it back to the viewer in order to assuage the self-consciousness. In order to do this, TV turned self-referential and ironic. Wallace argues that TV anticipates the self-conscious reaction of "too much" gaze by emphasizing that very sensibility. Thus, TV avoids Campiness by prioritizing the frivolousness through cultural references. Hogarth's lyrics, like all art produced in the age of irony, avoids Campiness by avoiding the high seriousness and focusing on the pop. 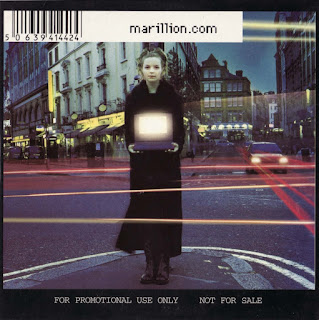 Of course, prog rock's ethos is not about pop, but rather the seriousness of itself. When Marillion's career trajectory shifted towards pop, it left behind Fish and prog rock's campiness in order to maintain relevancy in an era utterly dominated by irony. The emphasis on the modern conveniences of the modern age, the ironic detachment, and the consumer culture all mark Hogarth's tenure with the band as being part of the ironic era. Prog rock has become irrelevant because it is "too much" and we no longer live in an era of direct emotional address and "screams of sorrow." Irony has taken over, with its focus on products, barcodes, microwaves, and hi-fis.