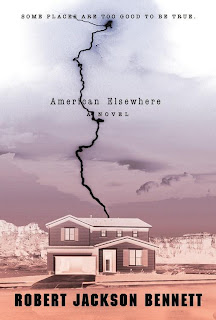 When I was 14 or 15, I was visiting my grandparents in Calgary all by myself. On a particularly lazy day, I was allowed to venture forth from their condo and explore a small area. Of course, my first destination was and always will be, a used bookstore. There, I came across a silvery shiny blue paperback of Clive Barker's The Great and Secret Show. At the time, my reading consisted of alot of beginner crap like Stephen King and cheap horror paperbacks from the 1980s (an era for which I still retain fondness). Barker's novel (which David Foster Wallace hated btw) promised a territory of reading unlike any other I'd ever read.

Structurally speaking, The Great and Secret Show was unlike any other novel I'd read up to that point. Rather than the traditional narrative of ordinary folks introduced to a small town with secrets that reveal themselves slowly and methodically, Barker has everything revealed in the first 80 pages. After a time jump in which our focal characters age 20 years, the action starts and never lets up: a war between two impossibly powerful humans using pawns and ghosts and creatures and nightmares. It's a strange novel if only because I hadn't expected the story to get to the "good stuff" so quickly.

Similarly, Barker's Coldheart Canyon resists the same structures of ghost stories. Instead of the protagonist being slowly driven mad by hauntings, everything is revealed in one quick burst, with the rest of the novel being an ever escalating series of confrontations and horrors.

Both novels are characteristic of Barker's tendency to get to the "good stuff" which is to say the horror that I so desperately craved as a teenager. However, Barker's horror novels are not traditional (as aforementioned) and fall under the nebulously defined but generative category horror-fantasy. This is where the non-standard stuff goes like say Alan Moore's Swamp Thing or Laird Barron's short stories. These are horror stories that evoke other worlds, other creatures not from mythology or folklore.

In other words, H. P. Lovecraft's influence looms over all of this, including Robert Jackson Bennett's American Elsewhere.

Bennett's novel works within the same category as Barker's Great and Secret Show and I wouldn't be surprised at all if Bennett listed that novel as an influence on this text. Both work with vast concepts across a small town canvas and feature other worlds only glimpsed that hint at dimensions and creatures not possible in our universe's physics. In other words, the exact type of pulp that I loved as an adolescent and that I still love now.

However, Bennett's novel lacks the elegance of Barker, but retains a better grasp of efficiency. In American Elsewhere, ex-cop (ugh) Mona Bright discovers that she has inherited a house in a town not found on any map. She goes there to discover more about her mother who committed suicide when Mona was a child. In Wink, New Mexico, she is confronted with a strange town, strange people, and endless rules about staying indoors at night, not touching the strange geodesic dome in the town square, and never ascending the mesa to the old abandoned government laboratory.

Of course, once the laboratory is introduced into the plot, the experienced horror-fantasy has already gleaned most of American Elsewhere's secrets: another world, vast unimaginable creatures, a battle on an epic scale, nauseating chitinous creatures from nightmares, all discovered in the name of science.

Mona, a biracial tomboy who no patience for nonsense (ugh), seeks to discover the truth about the facility where previously unbeknownst to her, her mother worked as a scientist. Along the way, she meets strange people who play Chinese checkers against unseen opponents, an old lady who hasn't aged in thirty years, a man who has replaced all the parts of a car's engine with detritus found in the kitchen, a child who has secret meetings with a fish-lady, and other strange things.

However, like in Barker's novels, Bennett wastes little time with the traditional structure. After an extended introduction in which he slowly moves the pieces in place, the remaining 400 pages are breathlessly paced and relentless.

Sure, Bennett's novel unfolds in somewhat predictable ways, but the narrative has a certain neat and tidy logic to it, so when I closed the book, I was utterly satisfied with this engrossing read. Stories, after all, have structure and rhythm and balance; Bennett understands this and has constructed his text accordingly.

He's clearly worshipped at the altar of Stephen King and its imitators, because he populates his Wink, New Mexico with the same type of "aw shucks" American realist characters that have dominated fiction since King's meteoric ascent to godhood. The human villains of the piece (because there are always human villains in these types of stories) could have been culled straight from Needful Things or IT. Characters are introduced in long prologues (always after an "act break" which speaks to the efficiency of the composition) that reveal their weird but relatable backstory. It's not... tedious, but neither is it... elegant. Rather, it's simply economical.

In typical Barker and King fashion, the whole point of introducing a large swathe of characters is to quickly dispatch them to show how important or frightening the main antagonist is. I can identify these tropes, I can understand their function within the narrative, I can despair at their predictability but nevertheless, I feel a frisson of excitement every time.

Where Bennett succeeds most is not simply his replication of a Lovecraftian menace, or a King-esque small town, or a Barker-esque clash of titans, but also his deep comprehension of how to mix and match these elements for pure efficiency, a word I've used a couple times already to describe American Elsewhere. Despite the novel being almost 700 pages, there is very little fat or excess. It's an economical novel that must do what it must do for the sake of the narrative logic, and has no spare time to traipse around in detours. Bennett has also learned from the altar of Elmore Leonard: "try to leave out the part that readers skip."

Alas, not all is perfect with Bennett's novel. While I applaud the use of a female protagonist, Bennett sort of stumbles with his characterization of women in general. They come in two forms in American Elsewhere: meek/submissive and aggressive/powerful. Mona is a powerful woman who has learned all of the masculine traits which comes in handy, narratively speaking. The other lead female is Gracie, a meek girl who has become... the concubine of one of the powerful alien figures. Which is gross.

In the last part of the novel, when the shit is hitting the fan, he deploys some essentialist balderdash: the hoary cliche that underneath every powerful woman, there's a strong maternal instinct that will suddenly take over and redeem her ruthless behaviour. It's not nice, but it does make sense in the narrative's logic.

Also, I was quite sceptical about the mixed race aspect of Mona, but Bennett only brings it up in the beginning in order to set a physical dimension to the character. It's not really anything that defines Mona, but is part of her identity.

American Elsewhere is a good horror-fantasy. It's not a game-changer, it's not doing anything drastically different, but it's certainly efficient, entertaining, and not terribly racist, sexist, or homophobic (which is saying something considering how pervasive all those things are).
Posted by matthew.