‘only the ghosts of other stories’

The 1986 documentary Handsworth Songs looks at the generational disjunction between enthusiastic first generation immigrants from the West Indies, and the civil disobedience of their children and children's children. Using the 1985 riots in Handsworth as the starting point, the film offers the thesis that the tension in the UK derives from a multiplicity of factors including industrial decline, geographic segregation, poverty, and most importantly, systemic and institutionalized racism.

The film's political aim is to challenge the normative narrative of "black youths = trouble." In another way, the film presents a "secret history" of Afro-Caribbean communities in the UK that problematizes and destabilizes the traditional media depiction of black people as problems. Thus, Handsworth Songs is an explicitly political film that combines a plethora of film techniques to makes its point: news footage, interviews, animated headlines from newspapers, poetic voiceover, oneiric and brooding music, and interrupted voices. The use of traditional documentary techniques closes off the political objective of destabilizing the naturalized discourse; hence the use of non-standard or more esoteric techniques. Rather, there is the interrupted voice, the refusal of the singular static monolithic story, all for a cacophony of voices, and the admission that there are no "stories in the riots, only the ghosts of other stories."

Handsworth Songs uses the 1985 riots but could have just as easily used the 1981 riots, or the Brixton riots in 1981 or any other riot in the UK during the 1980s, during Margeret Thatcher's reign. This was an era when Thatcher, the prime minister, made a "much quoted remark that white people were being 'rather swamped by people with a different culture'" (McSmith 88). The black experience in 1980s UK was one of underemployment or unemployment, one of substandard living conditions in racially segregated inner-city ghettos, and near constant harassment at the hands of the police. In inner London, the Metropolitan Police were using old Victorian acts to justify "stop and search" on the smallest shreds of evidence (though this was repealed at the beginning of the Conservative government). This was an era when the state used coercive and violent force in the form of police to repress non-white communities. This was an era when police killed black boys on mopeds. 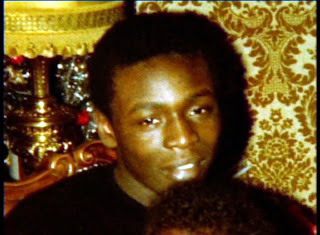 In 1983, Colin Roach was shot in the head while in lobby of a police station, and the subsequent inquiry into his death revealed a history of police harassment, wrongful detainment, and police brutality, much of it alleged to be racially motivated. In 1985, Dorothy Groce was shot and killed by police who had been searching for her son. The inquiry revealed that the police did not provide necessary warning of entry for the raid which would have prepared Groce for the police. Later in 1985, Cynthia Jarrett died of a heart attack during a police search of her home. In 1989, a van pulled up to Jamaican Hugh Prince and eight men jumped out and forced him into the van, wherein he was stripped and taken to a police station where he was detained on suspicion of drugs. Later that year, Prince alleges the police planted drugs on him in order to get a charge. In 1989, the police pursued Nicholas Bramble who was riding his moped. The police believed erroneously that the moped was stolen. Panicking, Bramble lost control of the moped and crashed, dying from his injuries.

Sinead O'Connor's song "Black Boys on Mopeds" takes the view that the police caused his death because they assumed Bramble's guilt on the basis of his skin colour. Like Handsworth Songs, O'Connor's song is one of countless responses to the repressive force of the state authority during this tumultuous era. Both cultural artefacts point to systemic issues rather than individuals as the issues facing black communities in the UK. It is the very institution of the state that upholds the racism, segregation, prejudice, and poverty. The system is to blame, the machinery of the state.

Thus, it is fitting that Handsworth Songs opens with footage of industrial machines whirring frantically, while ominous tones boom over the soundtrack. A black worker watches the wheels of the machine spin, observing, not entirely apart. The decline of industrial employment within the UK is alluded to frequently within the film. Employers tended to provide jobs to whites due to in-group favoritism, leaving black communities without proper employment. Children of immigrants, and their children, know only one land, the land of their birth, England, but were constantly asked by the media and the machinery of the state to be "repatriated" into the system, to be absorbed. This demand was and should be wholly unacceptable.

After the opening shot, after the murder of crows perched over a dark horizon, sirens blare across the soundtrack. A police siren wails. A glimpse of boots running. A shaky camera takes in debris, detritus, destruction. Shouts, screams, incoherent voices, a cacophony of voices. For Handsworth Songs, sound is vitally important to convey the complexity of the racial situation, but also the multiplicity of the stories. Using this collage of multiple sounds, images, and techniques, the film refutes the very idea of a monolithic "black community." There is no one grand narrative of the riots in the UK, but rather a variety of subject positions, beliefs, and motives. Instead of a homogeneous group of black immigrants, Handsworth Songs lets a variety of voices speak to, speak over, and speak about a variety of issues.

One of the initial interviewees in the film is an Afro-Caribbean man with an almost impenetrable accent. Despite the accent's thickness, or perhaps because of the accent's thickness, this man deserves to be heard, the film contends. Later, different ethnic groups are interviewed, including Sikhs and Hindus, but in the media, in the system, they are reduced and simplified to the sign of "blacks" which has a second order of signification meaning "not white" and "trouble." 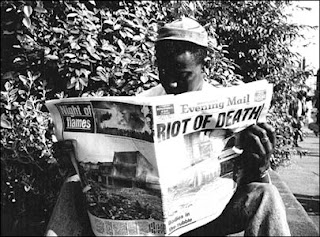 Headlines from newspapers report that this "mob was on the rampage," that this was a "riot of death." The newspapers show a group of armed police officers as "the front line" borrowing military jargon to naturalize the idea that fighting this civil disobedience is war, justified war. Headlines that depict Handsworth as a "bloody battleground." 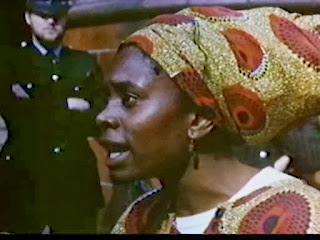 An Afro-Caribbean woman explains that it's not just the unemployment, which is in the background, but the harassment at the hands of the police. In the background of this shot, a white police officer stands still, arms crossed, watching impassively, as this woman of colour expresses her frustration with a state that only seems to care about individuals, not society. Thatcher's government, a neoliberal machine of privatization and neo-imperialism, was only interested in individual:

They're casting their problem on society. And, you know, there is no such thing as society. There are individual men and women, and there are families. And no government can do anything except through people, and people must look to themselves first. It's our duty to look after ourselves and then, also to look after our neighbour.

In this government, there is no place for those that cannot take care of themselves. Black youths blamed "society" for their problems because privatization, union strikes, an impotent Labour government, outdated colonial mindsets, the Enoch Powells, and other large scale social issues upheld and still upholds the institutional racism in England. 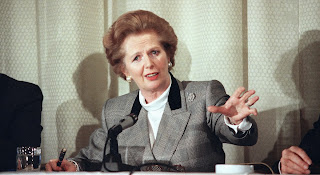 The pressure put on black communities in Handsworth is the same as the pressure put on in other parts of the country, one Afro-Caribbean man tells the camera. They are paid to do the dirty work of the state, he reports. He concludes by saying that there is no chance of relief from pressure: "if we're right, we's wrong, and we's wrong, we doubly wrong." He is expressing the idea of out-group derogation, when any critique of the in-group by an outsider is rendered invalid by the out-group status. His very articulation of the problem is part of the problem, the in-group would contend. Thus, there is no chance. No hope.

Handsworth Songs is both a time capsule of England in the 1980s and a timeless depiction of English racial tensions that continue to this very day. The film could be about any racial crime in the UK.

In 1959, Kelso Cochrane was murdered by white youths. The police denied that there was any racial motivation to the murder, despite the large presence of right wing political groups in the area. This denial and lack of police action led to racial tension in the area.

34 years later in 1993, Stephen Lawrence was killed by white youths in a racially motivated attack. The subsequent police investigation was found to be compromised by issues of race, leading an inquiry that concluded that the Metropolitan Police was institutionally racist. 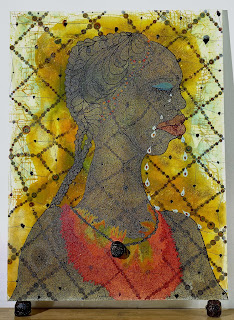 In 1998, Chris Olifi exhibited the above painting called "No Woman No Cry." Like Handsworth Songs, the painting is mixed media, offering a multiplicity of avenues for understanding. Olifi used acrylics, oil, collaged images, and elephant dung to create a portrait of Stephen Lawrence's mother Doreen. Each tear she cries is a picture of her murdered son. The portrait is designed not to hang on the wall as with other paintings, but leans against the wall, supported by two pieces of dried elephant dung. A third dried piece "hangs" on the necklace around Doreen's neck.

Along with the surface comparison of inspiration from racial crime, "No Woman No Cry" shares attributes with Handsworth Songs. Olifi's painting problematizes the traditional discourse of portraiture by refusing a frame, a border, or even two dimensions, as the elephant dung is wholly third dimensional. "No Woman No Cry" does not entirely reject traditional portraiture but uses visual collage to include a multiplicity of techniques. Handsworth Songs does not entirely reject traditional documentary techniques, but includes them with an audio and visual collage. 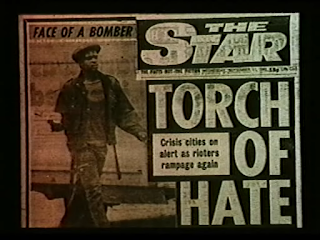 Both painting and film work together in a discourse of art resisting the coercive repressive force of the institutionally racist state. They are works of art that reflect the sheer complexity of daily lived reality, rather than the singular narrative of traditional portraiture or media reports that declare "this is the face of a bomber" as in the film, a face of terrorism. Rather, this face, Doreen's face, is one of the many affected by England's racist government and police.

O'Connor, Sinead. "Black Boys on Mopeds." I Do Not Want What I Haven't Got. CD. Ensign/Chrysalis. 1989.
Posted by matthew.

This is great thank you. Especially needed for these days!