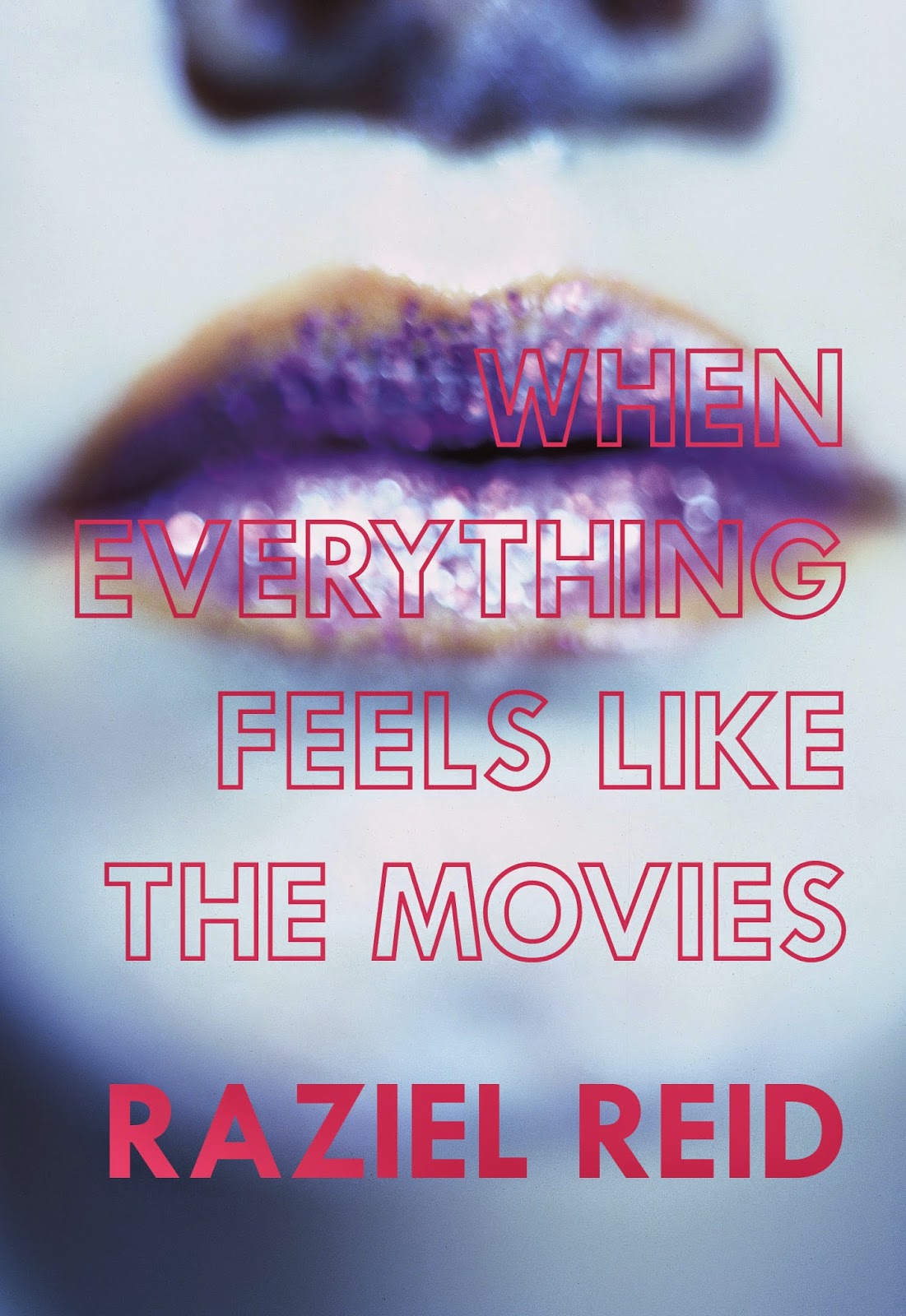 Pearl clutching! OMG! Children speak in vulgarities! They have sex! They struggle with their (gender) identity! OMG! Won't somebody purse their lips and disapprove of such things?

Raziel Reid's novel is closer to Bret Easton Ellis than current day Bret Easton Ellis. Both control a supremely disaffected narrative voice that masks terrible pain. Both present a worldview highly refracted through the incessant and inescapable celebrity world. Specific narrative tricks, such as imagining lightbulbs to be the flashes of paparazzi, and going "off script," are not unique to either, but certainly Reid is echoing, intentionally or not, Ellis's 1999 novel Glamorama. Whether or not it's successful is a different story.

I'm reminded, while reading this, of a forthcoming publication in The Walrus about trans fiction by cis writers. Characters must suffer, with blood, with pain, with tropes, in order to be enveloped into the canon of literature. A purification ritual almost. This same trope rears its head in Reid's novel, and not always to its credit.

Reid's narrator goes through a violent and humiliating series of events in order to -- well, perhaps that's where Reid's construction betters. This is a supremely ambiguous novel. Are all these characters awful, or is it a performance? Is there truly a difference anymore? Does one's socio-economic background determine one's fate, one's gender, one's sexual proclivities, or are they shaped by the omnipresent media? All great questions asked by Reid's novel and almost none of them answered. Of course, providing pat explanations of complex social events is not the novel's purview, so surely we won't fault it for refusing us intellectual closure.

Presumably, the chief question posed by this novel's reader is "why?" As in, why should we care for this cast of unlikable children who obsess over spiritually degrading things such as celebrity culture? Does the novel condemn these people for their less than healthy interest in fame? Or does it present fame as a coping mechanism for the socio-economic barriers presented by the dump town? Why does the novel ask us to care for these people but then makes little to no effort to show us why?

The shock tactic strategy of When Everything Feels like the Movies is a political one. This is Queerness as a political stance. Queerness as a challenge to the cis heteronormative structures that rule and control our lives. This is Queerness as disruption in the form of shock, sex, drugs, and violence. Queer folks try to live outside these oppressive structures and one way to facilitate this ejection from totality is to disrupt, to protest, to fight back using the very structures that hold. Heteronormativity wants to use sexual identity as a controlling mechanism, a disciplinary technology? Sure, we'll just take that very technology and fuck it, showing you how empty and powerless it should be. Reid's novel answers that call, answers that challenge.

I find myself less shocked by the novel but lulled instead. This type of protest is old hat: not that these techniques of aggression aren't necessary (they sure fucking are) but I'm familiar with them already. Thus, I can't really be annoyed by the pearl clutching. It's a required effect of Reid's Queer resistance. If people didn't clutch their pearls, When Everything Feels like the Movies would have been less successful.

Reid's prose, like his protest, didn't quite do the trick for me. I understood the necessity of this flat narrator's voice, but I found myself unimpressed by the technique; I've seen it before. There are moments when Reid's narrator finds a clever or pretty turn of phrase. Here is a paragraph from later in the novel after Jude, the protagonist has decided to leave his shitty one horse town and has received some money from his estranged father (the "him" at the end).


[The town sign] said "Welcome to hell." Someone had crossed out the name of our town and spray-painted "hell" in red letters over it. I laughed, imagining my grandma's expression when she saw it. It was snowing, and I could hardly see. It was like the air was white. But I could see the letters on the sign, dripping like blood. The snow was so deep it was pulling me under, seeping into my boots. I looked down the highway. It was a long black stroke of ink that told a never-ending story. I stood and waited, and every time I saw a pair of headlights through the storm, I was sure it was him.

Here we have a bunch of similes and metaphors strung together. Not all these similes are entirely successful ("it was like the air was white") but these moments of imagery concatenate for atmosphere. Notice the three colours being deployed in order to sustain a decent moment of imagery. Jude could "hardly see" because of the snow. All that he can see are: the red letters of the sign, denoting his hellish town; the white snow blanketing everything, connoting his own vision, his own ability to see options, connoting also his lack of physical and mental mobility; the black stretch of highway that takes him away from the town. The red is finite, dripping, slowly taking over; the black is infinite, open, accessible, "never-ending." Notice Reid's repetition of gerunds for a sense of present tense in a past tense narration. He uses "imagining," "snowing," "dripping," "pulling," "seeping," and then "never-ending." He then resists the expectation with the final sentence, stating plainly and firmly that Jude "stood" and "waited" both words with strong consonants, the "t" sound, the voiceless alveolar stop that is occlusive, meaning that it prevents airflow, creating a stop. Other writers might have continued the pattern of gerunds, providing us with "I stood, waiting," but Reid instead (and wisely) chooses the past tense form. "Stood" and "waited" are both stops, in a way, so Reid matches form (verb declension) with content (action).

Unfortunately, moments such as this are not frequent. Reid uses the Ellis pattern again of deploying scenes of heavy dialogue, full of arch irony and "jokes", then punctuates these scenes with moments of proper prose. It's a classic technique that sort of kind of works. Jude's vacuous demeanor is possibly a front, so moments of introspection pierce through our perception -- and the cast's perception, more importantly -- to present a more fully realized character. However, the tonal shift between arch irony and pathos filled moments of introspection is akin to whiplash sometimes.

When Everything Feels like the Movies is a good novel, not a great one. Its discussion of celebrity culture obsession is old hat, but its method of resistance to heteronormativity is useful and welcome. People will clutch their pearls about the mature subject matter, but honestly, these pearl-clutchers must have never hung around 13 year olds; they're absolutely vulgar, and deploy phrases and words they don't fully understand in order to be perceived as more mature. This effect refracts through the novel. We're not supposed to believe these characters. They're acting, they're performing. These are unreliable narrators and they signal this to you.
Posted by matthew.