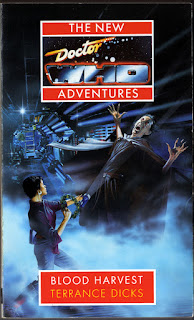 In some point in August of 2013, I read the previous Virgin New Adventures novel, All-Consuming Fire. I believe I concluded that I thought the book was enjoyable, but forgettable. Now, over two years later, I return to the New Adventures line with the 28th novel in the series (I hardly believe I've read 28 of these). I've returned, older and maybe wiser, because I found myself energized by the current series of Doctor Who—featuring the Twelfth Doctor. This run has had its downs (the Maisie Williams stuff I've found positively intolerable) but it has also featured some highs (the two parter about the lake and the two parter about Zygons). I was also energized by this video somebody posted:

Amazing. Completely sums up why I love both Seven and Doctor Who in general (if, at some point, this video no longer exists, it is a short scene from The Happiness Patrol in which The Doctor talks a henchman out of shooting him). I decided to return to the New Adventures because, on the whole, I've enjoyed them quite a bit—enough to read 28 of them!

Blood Harvest, published in July of 1994 (when I was 9 years old), presents two narrative strands that will obviously intersect by the end of the second act. In Prohibition era Chicago, the Doctor and Ace have opened and are operating a speakeasy with the nebulously defined intent of minimizing bloodshed during this period. Meanwhile, Bernice has been deposited on a planet the Doctor had previously visited (the Fourth Doctor to be specific) with the instructions to "investigate" and she eventually meets Romana II. Both strands in due course converge on a complicated plot by some Timelords to resurrect some elemental being of pure malevolence that manifests in the form of a vampire in order to win Rassilon's game in the Dark Tower. This is truly one of the nerdiest things I've ever typed out on this website.

Terrance Dicks, the author of this adventure, was the script editor on the show for years and also one of the most prolific writers for Target novelizations. He also wrote the second book in the New Adventures line. From what I can gather, Dicks's skill lies with plotting rather than prose, dialogue, or even characterization. Re-reading my review for Timewyrm: Exodus, I notice that I expressed fondness for the plotting, but not much else. (I wrote that shit in 2011! How time flies!)

Blood Harvest doesn't really stray from my thoughts wrought from my first experience with Dicks; the novel is competent and readable; I was able to complete the reading in two sittings. The careful and paradoxically haphazard deployment of previous lore from the show worked its magic on me: I felt like I was on the receiving end of an inside joke, one only intelligible to the initiated. I was energized by the reading of Blood Harvest, not surprisingly. It was just what the Doctor ordered, if you'll excuse the painful witticism.

As per usual, I thoroughly enjoyed Bernice Summerfield. She is neither hyper-competent and hyper-violent like the 90's version of Ace, but nor is she entirely helpless. Her expressions of agency and intelligence in the novel were surely the superior element of the experience. Normally, I find pseudo-medieval fantasy to be utterly unbearable and yet I found myself hoping the Chicago stuff would quickly end so I could get back to the "good parts."

Dicks decides to use a Raymond Chandler pastiche to narrate the Chicago parts of the novel, which sometimes work and more so do not work. Chandler had an impeccable ear for clever turns of phrases, and Dicks is, unfortunately, not on the same level. However, I didn't find any of the Chicago/Al Capone material to be insufferable; rather, I moderately liked my time in that setting. It helps that Dicks drops gratuitous historical and architectural references to display his weighty amount of research. While this might have been insufferable, it succeeds slightly if only because of my fondness for Chicago (which I visited in 2014ish).

As already repeated, I did enjoy my time with Blood Harvest. It's been too long that I was excited about Doctor Who. It is, after all, one of my favourite things in the universe. I should like to get through the New Adventures (all 61 of them!). Here's to the Doctor and may our time together always been at least convivial and entertaining.
Posted by matthew.