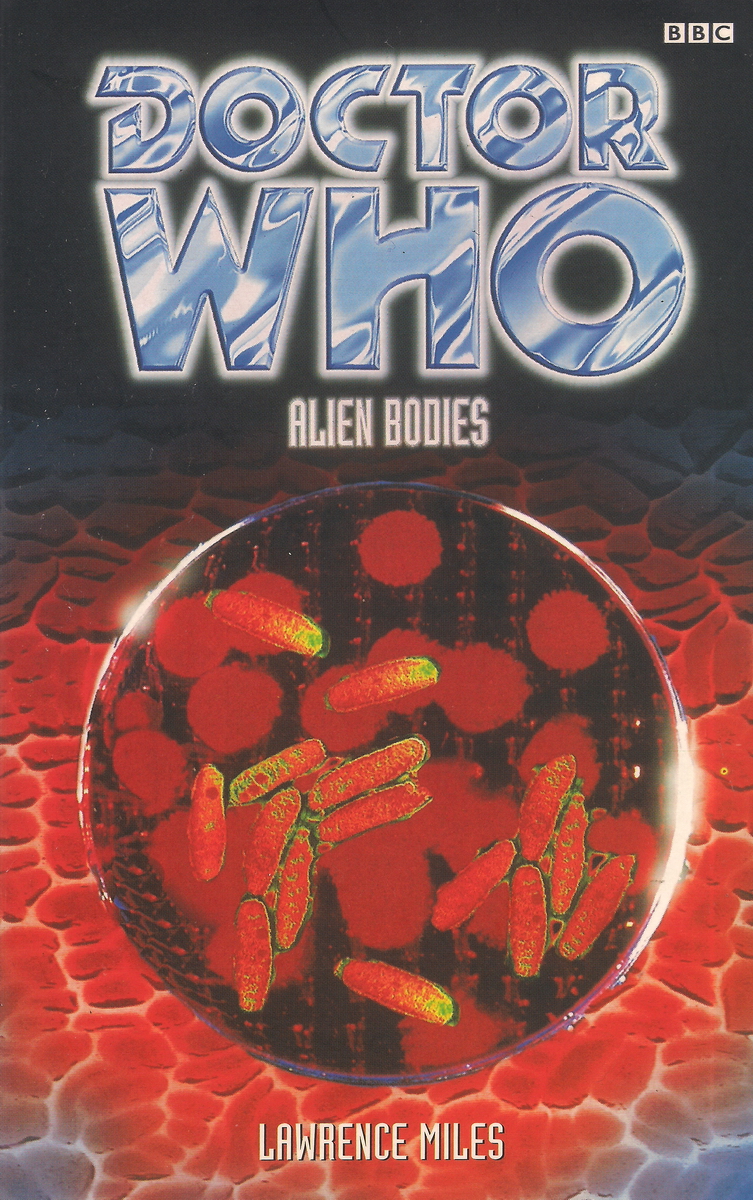 Hmmm... I could have swore I read the fifth Eighth Doctor Adventure War of the Daleks but as I check the tag "Eighth Doctor Adventures," I see the last one I logged was Genocide by Paul Leonard, which I read back in 2011 and thought was okay. I find it amusing to read my previous reviews of all these DW novels to see what I was taking away from the books. Four years later and I appear to be currently more interested in aesthetics than time travel shenanigans. I'm not sure I'll go back and read War of Daleks—considering the reviews it's received. But for now, I'm quite happy to make a triumphant return to the EDAs with Lawrence Miles' Alien Bodies.

Once can't be as nerdy of a DW fan as I am without hearing of Lawrence "Mad Larry" Miles. His cranky curmudgeon opinions and anti-social behaviour have cast him from the sunlight of DW fandom into simply the annals of fan history. If only he wasn't so cantankerous, the legend goes, he might have been an integral part of DW. I can't speak to his personality; all I can judge is his work in this novel. Based on that, Miles' contribution to DW cannot be overstated. Alien Bodies, in its 200 some pages, introduces more concepts and plot machinations than any other DW book I've read so far. In fact, reading this book a decade after the show's return in 2005, I felt a cloud of deja vu with every chapter, as so many ideas feel lifted straight out of this one. For example, the giant war between the Time Lords and an unnamed Enemy recalls Russell T. Davies' contribution of the Time War between the Time Lords and Daleks. Miles' introduction of this idea is a) unprecedented in DW prose and b) hugely ambitious. Other writers might have settled with basing their novel on this concept and nothing else. Not "Mad Larry." No, he isn't satisfied with simply this. He also introduces some major wrinkles such as an appearance from the fabled Thirteenth Doctor, the last regeneration, a companion that has had her timeline manipulated by some unseen force, a theory that the Universe by nature provides the Doctor with a companion, the concept that the Doctor requires a witness to his deeds (if a tree falls in the forest...). Very ambitious. And yet, he succeeds beyond all measure with his novel.

It's a combination of two factors: his witty bouncy prose and his audacity. Miles introduces a wide cornucopia of characters and species, throws them together in an effectively simple locale, and lets them bounce off each other. He audaciously halts the ongoing narrative of the novel with interludes that fill in background information for each character. This could go entirely awry if it weren't, again, for his muscular prose.

His characters also leap off the page, in part thanks to the interludes. Miles introduces Quixotl, the master of ceremonies for the auction that gathers everybody, Mr Homunculette, a Time Lord from the Doctor's future, two soldiers from the future version of the UN Special Forces (one of the soldiers is completely insane naturally), a dead but moving man, an alien that exists only as concepts, and Miles' own Faction Paradox, a splinter Time Lord group that worships, like a cult, the paradoxes of time. Later in the novel, Miles brings back the Krotons, but wildly changes their nature to make them both scarier and paradoxically more comedic relief. Each character gets their own little interlude, including the individual Kroton.

While Miles bounces them off each other, all confined to mostly a single location, the Doctor and Sam arrive and get mixed up with the auction. The prize of this auction is the Doctor's future corpse, the body of the Thirteenth Doctor, the last regeneration. The Doctor is appalled, repulsed, frightened, but in typical Doctor fashion, intrigued and unable to stop himself from interfering. He is not supposed to mess with his timeline, but as other characters point out to him, he does it all the time. Miles isn't quite interested in the ethics or the meaning of such loops of causality; Alien Bodies is more of a spectacle than a novel of ideas. If there was one criticism to make of this novel, it's that Miles seems delighted to introduce ideas and then move on without following them through.

Again, it's always difficult to read these novels in the historical context that they were published. Alien Bodies came out in 1997, still in the wilderness years of DW, with Russell T. Davies' reboot still 8 years away. Miles, I gather, was sort of lauded as the second coming of Christ; he had great promise and seemed ready to reinvent and reinvigorate the brand, bringing it back to its glory days of big thinking and great action. Alien Bodies must have felt revolutionary when originally published. Certainly, I thought it excellent; I can hardly fault it for its ludicrous audacity, even when the cleverness of the concepts slip from Miles' grasp. It also sounds like the wilderness years were full of bickering, in-fighting, and sniping, even beyond Miles himself. I suppose during that time, when people were unsure if DW would ever return, like all nerds, they over-compensated and got too protective of their beloved property.

All of this to say that, without the historical context, Alien Bodies is fucking fantastic. With the historical context, it's even more remarkable that those in charge of the books would take a chance on something so audacious as Miles' ideas and allow him to help shape the future course of the Eighth Doctor's adventures. This is wild stuff that pushes the concept of Doctor Who a little bit. There's a fine line between overturning decades of lore for cheap shocks and an almost reverential deepening of that which makes the concept so fecund. Miles manages to be both respectful and irreverent with DW (eg the Krotons), leading to a stronger mythos.

I'm under the impression that the great majority of EDAs are crap, drivel churned out to satiate an audience that wasn't large enough to sustain the ratings the BBC needed for the show. I'm also under the impression that Alien Bodies might be the pinnacle of quality for the entire line. If this is true, then I'm in for a long haul. I'm interested in the more serial aspects of the EDAs, so I'll probably trudge through. I hope, I pray, some of it reaches close to this level of quality.
Posted by matthew.