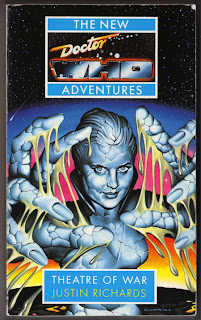 December 9th, 2015: So I found this review in my drafts from 2013. I'm publishing it without editing it in the slightest and it's also unfinished, which why I suppose I didn't publish it. Looking back on this review, I notice that my fraught relationship with DW has been going on for a few years now. Apparently, I've been complaining about Steven Moffat's status as showrunner since the 6th series. I also see that my fraught relationship with licensed material hasn't really evolved. Here, then, is an unfinished review of a book I liked and enjoyed.

It's been a long time since I've read a Doctor Who novel. The problem was that I was stuck on Gary Russell's Legacy. I have the ebook, but it's so poorly formatted that it's practically impossible to read. Plus, the novel itself is practically impossible to read. Nobody asked for a long history of Peladon, especially one that sounds like a Gor novel. Nobody. So I put it aside.

I'm having a bit of a strange relationship with Doctor Who right now. The current series — split into two half series — is fairly disappointing. Each episode has been disposable, forgettable, lazy, and illogical. I'm yearning for a change in showrunner (despite my enthusiasm for Steven Moffat) and for a new Doctor (one that has more than three emotional states). On top of this, I'm finding myself at odds with the more... problematic aspects of the series. The lack of people of colour, the imperialism, the colonialism at the heart of the Time Lords, the distinct lack of queer characters, the female characters having practically no agency, the constant re-inscribing of heteronormativity, etc etc etc. I can't help but notice these things. The sheer ephemeral quality of Doctor Who insists on me now. I have hundreds of books in my room waiting to be read, some of the greatest works of literature ever, so why would I read a spin-off novel, an example of fan fiction (albeit professional)? Why would I waste my time with mediocre science fiction?

I'm not quite sure if I have an answer to this question. No matter how much I learn about critical race theory, queer theory, feminism, Marxism, I'm still going to enjoy cultural objects that strike particular chords with me eg Indiana Jones (and imitators), James Bond, Jason Bourne, and the Doctor. These fantasy figures still have an incredible hold on my imagination, no matter how problematic they have shown themselves to be.

I recently read John Gardner's License Renewed, his first James Bond novel, and the first authorized continuation of Ian Fleming's work. The novel was... interesting (ie new 1980s Bond drives a Saab and not an Aston Martin which strikes me as particularly telling) but ultimately underwhelming. The Bond formula of the cinema is different than that of the literary Bond; one is focused on secret lairs, long drawn out setpieces, and the other is interested in laboriously detailing Bond's secular materialism. One can see Len Deighton's exacting and precise influence on Gardner's novel in the tedious descriptions of Bond's breakfast. Everything is rather prosaic and inert. So why did I bother finishing it? [Editor's note: I have zero memory of reading this James Bond novel]

I suppose the same reason why I returned to the New Adventures. Books, the physical object one holds in one's hands, have always intrigued me more than television or film. As a child, I read novelizations of films, despite already seeing the film. I devoured comic book adaptations of the films (I'm especially fond of the awful three part series transforming Schumacher's Batman Forever into comic book form) and even read comic book series that adapted cartoon versions of comic book series. The literary form had a stronger ability to draw me within. This might help explain why as an adult, I would prefer to read an adventure starring the Seventh Doctor than to watch the same adventure.

Books have no budget, no time constraints, no advertisements, no actors, no cheap rubber suits, no boom mikes drifting in from the top of the frame, no seams, no limits. Doctor Who, as a TV show, is a rather laughable endeavour. The classic series have awful pacing, awful special effects, the dialogue is almost unintelligible, and the monsters never look scary. This is the problem discovering the show as an adult.

But the New Adventures. They do not share the same limits. They do not have constraints other than ones mandated by editors ("Ace has to be badass" "must include fanwank continuity stuff" etc). Out of the 26 novels I've read (jesus wept) in this series, only a few have been objectively bad novels. Most have been fun romps that pluck my Seventh Doctor strings in the right combination. I'm thinking of The Highest Science and The Left Handed Hummingbird as especially good examples of the series. Both are complexly plotted, humorous, affecting, and manage to evoke the spirit of the series (time travelling god gets out of scrapes using his wits, companions, and confidence).

Theatre of War looks back to the past mode of Who storytelling, with its introduction of cannon fodder, complex back story, oppressive authority figures often quick to lock up the Doctor, and its childish political gestures. However, the novel is not limited to one set or a labyrinth of corridors and hallway. Justin Richards lets the novel breathe with a languid setup on multiple planets with multiple characters.

While travelling apart from the Doctor and Ace, Bernice Summerfield gets mixed up in an archaeological expedition to uncover an ancient amphitheater on a barren planet. The previous expedition resulted in numerous casualties and a mystery requiring a solution. However, when the newest expedition arrives, crew members are menaced by men in medieval armour, sentient mud, moving statues, and an enigmatic machine that seems to contain a holographic version of the world's greatest play, lost for centuries.

In true New Adventures fashion, Richards keeps the Doctor at arm's length until about a third into the novel. This is a curious trend if only because surely people read these novels for the Doctor, and not for the cast introduced only to be killed?

What makes Theatre of War so much more interesting than other fanfiction is that Richards attempts something grandiose. He takes a stab at metafiction, not altogether unwelcome, either. The greatest play of all time is lost, but possibly found, and immediately, the reader catches a whiff of the possibility that the Doctor is either responsible for its disappearance, or that he is responsible for its creation. It's an intriguing time travel angle that Tim Powers uses to decent effect in The Anubis Gates.

December 9th, 2015: I have no idea where I was going with this. Thus, I publish the review unfinished. Again, I did like the novel. Not sure why I didn't keep writing.
Posted by matthew.