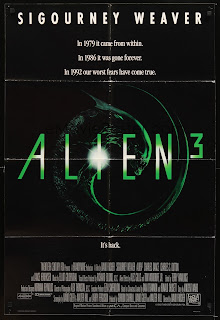 Despite having seen the first two Alien movies probably twenty or thirty times, I've only seen Alien³ twice, maybe. I remember finding it a bit of a bore except for the final sequence, which I've always found to be quite heartbreaking. I was certainly the right age for the film—I can remember anticipating the release, but I wasn't old enough to see the film theatrically. I eventually saw the film on VHS probably in the mid 90s, and then again, when the terribly named "Quadrilogy" boxset was released on DVD. Up until this year, I had only ever seen the theatrical cut.

The 2003 Assembly Cut, as it were, is presented without any input from director David Fincher, but the cut does seem to be closer to his initial vision, according the comprehensive and wonderfully entertaining documentary that accompanies the film, called Wreckage and Rage. The clash of Fox and Fincher is well documented: an immovable object against an unstoppable force, and even in the Assembly Cut, one sees the interference of the studio. The problem, if it can be summarized, is the classic "too many cooks" situation; one talking head in the documentary (the matte painter, I believe) informs us that during the editing process, Fincher would watch the dailies and give instructions. Once he left the room, the studio toady that followed him everywhere would undermine the fixes based on the available budget. Wreckage and Rage features interviews with perhaps everybody but Fincher himself, though a very clear picture of his feelings towards the film emerges, thus his lack of participation in the making of documentary and the creation of the Assembly Cut.

Despite all the problems, the long road towards its commercial release, the Assembly Cut is a vast improvement (thought not without flaws) over the theatrical cut, and this can mostly be summed up in one particular sequence that can kind of act as synecdoche for the rest of the improvements.

Consider the scene (cut from the theatrical version) in which the two prisoners bring the dead ox into the abattoir. They haul in the ox, attach it to hooks, and have a small conversation about what they would do if faced directly with Ripley. They both boast and make some gross comments about women, all the while, the conversation is interspersed with talk of the ox: how they'll butcher it, how old she was, where her body was found, etc. This scene speaks to Fincher's power in storytelling. Like all good scenes, this bit has multiple functions. Firstly, the audience is given some important exposition delivered through elision. As veterans of the xenomorph's life cycle, viewers will immediately suspect that the ox contains the embryo, the chestburster. We had already seen the acid on the cryotubes in the EEV and the ox's death is evidence enough to conclude an alien has followed Ripley. (Not to mention, the very existence of Alien³ implies an alien, otherwise why would we watch this film?)

Secondly, the scene delivers important worldbuilding, exposition. The audience has already learned that the convict planet is men only. We know that Charles S. Dutton's character, a religious leader of sorts, fears that a woman's presence will upset the careful balance; her femininity will cause reversals and setbacks in the men's careful road towards religious salvation. The small conversation between the two convicts in the abattoir, then, hints at two things: the men are dangerous for women, and more importantly, are somewhat cowardly, but not entirely. These two convicts demonstrate the braggadocio that will be challenged when faced with a real threat, the xenomorph. This character work is reprised during the two major setpieces as the convicts as a group, work toward redemption and courage in facing the Beast.

It's a shame, therefore, that the scene was replaced with the alien bursting forth from a dog, rather than an ox. The juxtaposition between the ox, as work animal and the alien as predator has multivalent symbolism, as the convicts themselves are work animals, prisoners of both the penitentiary planet, a work prison, and of the rapacious logic of late capitalism as symbolized by Weyland-Yutani the company.

Wreckage and Rage doesn't quite clarify why the ox was switched out with the dog; one can conclude it's not because of reluctance to gore; the dog's death revels in the blood and sounds of death.

And while the film does not shy away from violence or gore, Alien³ also has some of the most ambitious thematics of any of the previous films. While Aliens dabbled in themes of motherhood and duty, Alien³ examines redemption and faith in a hard world, a cruel world.

Fincher, despite being only 28 years old, had approvingly lofty ambitions for the film. Wreckage and Rage details the efforts and labours of the prop department to construct a cross made of found objects that would sit askew in the foreground for a shot that lasts only a few seconds. The image is quite striking, iconic in a way that presages Fincher's more indelible moments in films to come. The shot is also meaningful, the way that good cinema is meant to be. Instead of "cool" window dressing, the cross relates to the viewer the religiosity of the convicts, their resilience (erecting the cross in less than ideal weather conditions), and their resourcefulness. The found objects that comprise the cross are the convicts themselves, gathered together by their crime (for some, like the found objects, the detritus, the crime of existence itself is sin enough).

The film demonstrates its depth during the funeral scene that punctuates the first act. The bodies of Hicks and Newt are delivered into the foundry while Charles S. Dutton's Dillon provides a stirring eulogy. It's worth quoting in full, I think:


Why. Why are the innocent punished? Why the sacrifice? Why the pain? There aren't any promises. Nothing's certain. Only that some get called. Some get saved. She won't ever know the hardship and grief for those of us left behind. We commit these bodies to the void with a glad heart. For within each seed, there is a promise of a flower. And within each death, no matter how small, there's always a new life. A new beginning.

This speech is cross cut with the birth of the titular alien, creating both important irony (and dramatic irony, as none of the characters know about the alien's existence) in Dillon is actually referring to new life as one beyond the pain of existence, a life of peace and freedom. This "new life" is finds its ironic opposite in a malevolent birth, a cruel birth: the ox's death (or dog's death in the theatrical cut) is the ground from which the evil flower grows.

Alien³ suggests that Ripley herself has no freedom. She is a prisoner of the Company, of the malignant life that grows within her. She is a prisoner just like the convicts, but their faith allows them a small measure of freedom, even if it's only in their minds. Their faith makes their sacrifice meaningful. They trust in something greater than themselves, greater than the baleful life cycle of the predators. Ripley sees this in the end. She kills herself to provide freedom to the world, freedom to herself.

Yet, the audience will also learn later that within Ripley, there grows a malignant seed, a young queen. The new life inside her is hostile and dangerous, so she seeks peace and freedom by following the bodies of Newt and Hicks. The punctuation of her companions' funeral is perfectly harmonized with her own sacrifice and bid for freedom, unshackled from the long chains that bind her to the Company.

These thematics are not subtle; Alien³ presses heavily on these things. Subtlety has never been a part of the franchise. Yet, I can't help but look at this third film in a stronger light. Older and perhaps wiser, my desire for the blood and guts of the second film is tempered by the mournful and melancholy tone of Alien³. It's a funeral dirge from the beginning. This film has the best score out of the bunch, provided by Elliot Goldenthal, one of sorrow and catharsis.

Fincher complements this soundscape with evocative camera angles. The first half of the film, the convicts are shot from below, the camera placed near the ground, looking up. The audience is asked not to look down on these fallen men, but consider their possible redemption through heroism. Looking up to them, exalting them, is tempered by their gruff accents, cruel speech, and shabby exteriors. The film asks the audience to remember that these are not saints, but that within each of us, there exists the seed, the potential for heroism, for the ambition to grasp freedom.

A final note. The theatrical cut has Ripley's sacrifice muted by the alien actually bursting from her chest. The Assembly Cut does away with this unnecessary note and has Ripley fall in the Christ pose, suggesting her sacrifice is greater than simply the end of a character's story. The garishness of the alien's eruption is particularly indicative of the misguided tone of the theatrical cut. It's extraneous. We already know it's there; why show it in such detail?

If you haven't seen the Assembly Cut, I recommend it. A huge improvement.
Posted by matthew.