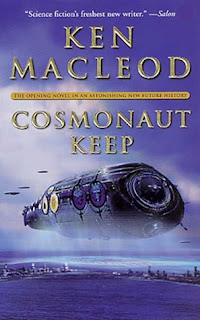 Cosmonaut Keep was an interesting read. I have a lot invested in MacLeod, as I've already purchased: the entire trilogy of which this is the first part; a stand-alone novel; and the first half of his four volume series that began his career. On the cover of the Orbit paperback I own, MacLeod is the recipient of praise from Iain M. Banks (yay) and Peter F. Hamilton (umm) among others. MacLeod's presence in the "New Space Opera" movement is assured and he is well known for his left leaning politics infused into his future imaginings. The first book of the trilogy Engines of Light was, to put it mildly, a difficult read. I'm very happy to report that the worldbuilding in this first novel is excellent and compelling, but what makes it more than just another space opera is MacLeod's approach to exposition. As in, there is little at all. Here then, we have a rare space opera that withholds more than it provides, which begs many ontological questions about the world he's built.


The novel is composed of two seemingly discrete narratives that by the laws of literature must converge at some point, probably in the third act. The first narrative introduced is in a far-future quasi-medieval world filled with futuristic technology. The humans on this planet have little to no tech, but are aware of the technological possibilities afforded by their deep ancestors. The humans, comprised of three species (two of which we never meet), live beside "saurs," the evolutionary development of Earth's dinosaurs. These saurs are technologically advanced, but not nearly as advanced as the spaceships that loom over the world, piloted by hyperintelligent squids dubbed krakens. There are also, and I'm unclear on this detail, giant humanoid "Gods" that literally stand on the planet and just watch. The humans have descended from the crew of an ark from Earth's (current) future (2047, I believe); however, despite the thousands of years that straddle the crew's arrival and the narrative's present, the crew lives still.

The second narrative details an alternative history slash alternative future in which the Soviet Union conquered Europe and has made it not quite a utopia, but somewhat close. MacLeod is no fool and doesn't paint the repressive regime of the Soviet Union as completely benign. In this future of 2047 (I think), Communist Europe uses biodegradable technology, presumably made of organic material, whereas the US still deploys completely inorganic tech. Their Cold War continues, symbolized by the two diverging strands of tech. Matt Cairns, the protagonist of this second narrative, is thrust into a confusing conspiracy involving the plans for an alien spacecraft that looks frightfully similar to the classic UFOs of American imagination. He travels to a space station in the midst of a revolution and helps build this faster-than-light ship, with the help of an alien species composed of quintillions of hyperintelligent bacteria with mysterious motives.

I'm still not even sure I've understood what happens in this novel as MacLeod explains only in drips and drabs, until you are dying of thirst for more information. This approach, as I mentioned, has interesting consequences for how I considered details of the world. This considered meting out of info calls into question seemingly prima facie details, such as the biodegradable technology of the Soviet Union. In the narrative, this aspect of the world is explained without much fanfare, simply another difference between our real present and this fictional futurity. Yet, MacLeod's casual exposition uses the same disaffected, almost uninterested tone, in detailing important shit like the aliens as it does with Soviet tech. This very subtly and cleverly calls attention to itself by virtue of not calling attention to itself, to the point where I began to question the very authenticity of the world that MacLeod has constructed. Is the biodegradable tech just another element of worldbuilding or does its existence in the fictional world have its origin in the aliens, or another party we haven't been introduced to yet? MacLeod is clever enough to understand the very constructed-feeling nature of a future world, as the narrative very carefully and quietly insists on the construction.

While I love the unreal concepts that MacLeod strings along in Cosmonaut Keep, his approach to exposition has a dual effect: I admire his reticence and therefore his respect for the audience to do much of the work; while simultaneously, very little is impactful as the nature of this world is cloaked in authorial shadows, impenetrable no matter how close the reading.

Additionally, MacLeod leans on classic space opera generic elements such as intense affect, especially in romantic terms. A major subplot of the novel is a love triangle. On the face of it, a love triangle is not inherently negative. However, MacLeod's characterization isn't his strongest suit, giving his attention to romance a bit of silliness. It's difficult to take the romantic entanglements of the novel seriously because I suspect MacLeod himself doesn't really take the topic seriously. The book feels embarrassed to have this included while paradoxically leaning on this aspect heavily, at the expense of exposition, even if this exposition does productive labour vis-a-vis the genre of the space opera.

Over at his blog, Charles Stross assembles a not-totally exhaustive list of tropes found in space opera. He lists then thematically, all the clichéd ways in which science fiction writers imagine their future societies. Some of the clichés that Stross identifies are particularly groan worthy (eg. the tendency for far off planets to have multiple Moons and multiple Suns) whereas the rest of the list reads like a TVTropes article that mechanically lists all possible ways of conveying a story to an audience. It's the opposite of semiotic projects like Umberto Eco's cataloguing of ugliness in that Stross's snarky list doesn't provide any novel insight into why these tropes are so popular. Stross, a writer I'm sure is a nice person, comes off as a total asshole, an arrogant snot who, with a wide brush, dismisses other writers by dint of deploying tropes. As if he doesn't deploy tropes himself. He refers to them as "generic cliché mistakes," making the egregious error in assuming the deployment of tropes is ipso facto a mistake. This is, of course, categorically untrue.

This discursive avenue is irritating, especially as it slots into a larger cultural shift in how the Internet talks about narrative and storytelling. Consider the popularity of garbage channels like Screen Rant or Cinema Sins, which perform the same shallow series of observations about plot, but without ever saying anything particularly astute or informative. Rather, it's the smug recapitulation of the viewer's own intellectual superiority: "I can identify these tropes in the object and therefore I'm above the object." It's the same cultural logic that stymies any affective labour performed by films directed by Christopher Nolan; in the hyperactive obsession to outsmart the audience, characterization and thematic depth are discarded.

Here, one could easily object: Stross's blog post isn't a robust, scholarly project on the use of clichés in space opera but rather an informal and ad hoc "taxonomy" as he dubs it. Yet, my observations on his tone ("mistakes") and the comparison to TVTropes is still apt, regardless of publication context. Likewise, a lesson I learned swiftly in my grad studies: a taxonomy is useful in many situations but a thesis it most definitely is not. I was asked to hold my papers to the highest possible standard called the "so what?" test. My thesis statement, the argument of my paper, must be able to answer the question "so what?". Whether the answer come in the form of larger aesthetic or political thought or a wider contextualization of the paper's arguments, the thesis only has meaning if it matters. Here, we have a taxonomy that does nothing but show off a writer's own cleverness. Simply listing the tropes does nothing, really.

The mobilization of tropes with Cosmonaut Keep is not always some perfect ironic, postmodern deconstruction of the genre nor is it the mindless repetition of what has come before. Frankly, as I've mentioned, I'm not sure MacLeod is terribly interested in the rigorous replication of the genre. Moreover, it is in the deliberate use of tropes that gains a text its productive discourse, not simply the tropes themselves. Cosmonaut Keep doesn't necessarily do anything novel with its tropes (eg. the biodegradable tech comes from postcyberpunk anyway) but in when and why the mobilizes them. The text only fitfully dispenses information, leaving the reader floundering in a sea of almost recognizable tropes (eg. hyperintelligent colonies of bacteria). Each time new details emerge (the first page features a god that is never explained), the reader is left unmoored, and is forced to work, forced to think about the text. In this way, Cosmonaut Keep is subverting the traditional epistemological formation of space opera not with space opera tropes but with its very construction.

In other words, Stross may write a space opera that avoids all clichés of worldbuilding, but this doesn't prevent his space opera from being as rote in its execution as the books he sneeringly disdains.
Posted by matthew.