Twenty Trillion Leagues Under the Sea 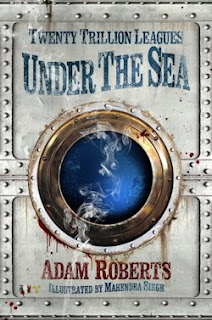 It seems to me that the reception to Adam Roberts as a writer of fiction is binary: adulation of his immaculate craft or dismissal on the grounds his work is impenetrable or narratively unsatisfying. I've read more of his nonfiction than I have of his science fiction, which I need to remedy immediately as I thought Twenty Trillion Leagues Under the Sea was just fantastic, albeit imperfect.

Roberts' reputation on Goodreads is dismal; his books have low scores and many people consider the executions of his clever concepts to be lacking. A characteristically anti-Roberts review can be found here, which I will, in at tedious and pedantic length, reply point by point.

The review's main bone of contention seems to be that the novel is presented as an "homage" to Verne (the reviewer's word) but Verne's concepts and even overall feeling tones have been disregarded for a more Lovecraftian exploration of madness. They write:


the 'homage' here is more about making fun of Verne than in taking the spirit of the Tweenty [sic] Thousand Leagues Under The Sea story and creating a new interpretation.

The problem here, seen immediately, is that the reviewer is critiquing a book for not being something it never claimed to be in the first place. The title of Roberts' novel signals the initial concept, but the setting and execution deviate almost immediately from any Verne pastiche. Perhaps this reviewer was expecting a pastiche or some modern revision of Verne's classic tale. Alas, this is clearly not Roberts' aim, especially in his explicit mobilization of political differences, ideological and historical, between the men in the submarine. Roberts' themes excavate ideological differences in forms of science fiction, from individualist to collectivist notions. The reviewer dismisses the eventual product, writing:


it felt like the author was trying too hard to create a classic 1950s horror sci fi with big Ideas (with a capitol "I"). I guess, in a word, it felt pretentious.

I can't really respond logically or definitively to the allegation of "pretentious." It's a dog whistle for "this is art I don't like." But we can see that the reviewer does not accept the mobilization of Verne in service of generic exploration (literalized as oceanic exploration).


Most especially, is why Verne was used when there is no Verne in here other than using a submarine (would you label Das Boot as a Verne homage because it is in a Uboat?).

I'm not sure who "labelled" this as an homage to Verne. The official synopsis of the novel does not explicitly claim an "homage to Verne." But more relevant than marketing (not in Roberts' control, unfortunately), Verne's name is used to conjure Golden Age science fiction and its technological idealism and weight this against the Atomic Age's cynicism and existential crises.


The lack of understanding of Verne is most evident in the title: leagues are a *distance* not a depth and this story is about falling/sinking. Verne recounted a voyage across the ocean, not how far the Nautilus went down under the ocean.

The title is meant to evoke Verne. It's not supposed to be taken literally. Especially since one of the final chapter titles explicitly refers to this disjunction between leagues and distance. This is a really unconvincing form of critique. It's pedantry for the point of it. One of the most annoying trends in science fiction criticism used to be attacking the plausibility of the science and holding the rest of the novel to this failure on the part of the author.


But that should also give you an idea of what this book isn't: it's not an exploration story with fantastical settings as with Verne. It doesn't even use Verne's tale as a base.

Well, it is an exploration story with fantastical settings. I'm not sure why it needed to use Verne's tale as a base for the novel to succeed as an exploration story with fantastical settings—which it definitely does do. Again, the evocation of Verne is meant connote ideological differences that Roberts then compares and contrasts (romanticism against pragmaticism, Marxism against capitalism, imperialism against isolationism, etc).


It's just a story of a long boring drop that drives the crew insane and completely misses the Victorian adventure point of Verne's story.

Considering the novel is set in 1958, the lack of "Victorian adventure" is purposeful. Boring, of course, is an aesthetic judgement and thus, subjective. I found the novel to be endlessly fascinating and completely compelling.


But then there is the writing - it was enough to make my eyes bleed. Take this painful sentence from the book as an example:

The reviewer takes the final page of the novel as indicative of the overall prose. Perhaps this is a valid rhetorical move... maybe? The quote he chooses, though, is very not representative of the overall prose style of the rest of the novel, something he inadvertently implies later in the review, thus undermining his point. He also doesn't mention the stylistic change from narrative to final page. However, most egregiously, the reviewer does not contextualize his choice of quotation. Rather, he drops it and claims it's bad because it uses a metaphor he doesn't agree with. He then complains that the next paragraph uses religious symbolism, in contrast with the metaphysical tone of the preceding paragraph. Even though one of the central conflicts of the novel, which is explicitly stated, is the tension between materialism and spiritualism. The two final paragraphs of the novel flow to punctuate the sheer impossibility of knowing the world in totality.

Again, this is purposeful. The juxtaposition of the two is completely the point of the novel.


I am at a loss to see why we need a hybrid of At the Mountains of Madness with Jules Verne's Nautilus.

Completely disagree. This is exactly what I wanted from the novel and it delivered. This sentence is very demonstrative of the review itself. While earlier, the reviewer chided Roberts for not delivering a straight homage, here he acknowledges that the Verne influence is mixed with Lovecraft (I fundamentally disagree that Roberts' chief analogue here is Lovecraft, anyway), thus changing his criticism from "this isn't an homage enough" to "I didn't need a pastiche of Lovecraft and Verne"; it's a classic example of moving the goalposts.


Even in the first few pages, the characters are commenting on the stupidity of having a large viewing window in a submarine and how it would make the vessel susceptible to implosion.

They make one reference to the structural instability of a submarine. The reviewer does not mention that most of the cast speak lovingly of Verne and almost all of them have read the seminal texts by him.


There are illustrations of a 'wood block cutting' type of nature. Black and white and both sparse yet detailed. They were as cold and stiff as the story, further ruthlessly removing all romance and fantastical and again steering more toward the horror/thriller aspects. I didn't feel they added anything to the story at all.

Here's an instance where I might actually agree with the reviewer. The illustrations did nothing for me. Unlike the reviewer, I apparently understood the point of them (to alienate the romanticism of Verne).

Am I being too picky with a reviewer who publishes on Goodreads? he says with a sneer. Maybe. As much as I enjoyed Twenty Trillion Leagues Under the Sea, I can't claim I hold the novel or even Roberts to this impossible standard. I'm not picking at this reviewer because I love Roberts so much I can't conceive of any critique of his work. Rather, I'm irritated that this is the most popular review on this book's page when it's a poor review, full of strawmen and misdirection.

A better review than that (or even mine) can be found on Jonathan McCalmont's blog. There, McCalmont praises the novel, but recognizes its flaws (the illustrations, the structure, the pacing, etc). McCalmont finds textual links beyond the obvious (eg. Lovecraft) and draws thematic connections and makes some critical evaluations of the relative success or failure of Roberts' endeavour. It's an essay of better-than-average criticism. To be fair, it's not McCalmont's best work on Roberts; his essay on Jack Glass is far superior. In that essay, McCalmont lays the groundwork for understanding Roberts and genre, the tension between them. His review of Twenty Trillion Leagues Under the Sea is structured well enough that not having read the previous essay won't be a hindrance, but having read the Jack Glass piece certainly helps contextualize the author's greater relationship with genre.

My review has not been critically perceptive or evocative. Rather, I've been more evaluative of criticism surrounding the novel. I hope, though, that my overall opinion can be gleaned from the preceding pedantry: I thought the novel quite good, but imperfect. I really need to read more Adam Roberts. He's doing extremely fascinating work.
Posted by matthew.

I'm curiously sympathetic to the Goodreads reviewer as contemporary SF writers producing sequels to historical works is undeniably a thing. Baxter did the Time Machines and I think he's going to do a sequel to War of the Worlds too. The cover doesn't explicitly state that the book is a sequel or set in the same world but nor does it necessarily go out of its way to dissuade browsing punters of this impression either. However, that's not on Roberts... that's on Gollancz.

Having said that, I think this book is a thematic continuation of the original work in so far as it's an attempt to return SF to the non-materialistic philosophy that inspired Verne. In fact, I think a lot of Roberts recent work (both fictional and non-fictional) has been inspired by a desire to forge a new relationship with the noumenal and effectively provide Roberts with an excuse to write himself into some form of spirituality.

It'll be interesting to see where he goes with all of this but I think Leagues showcases a fundamentally different Adam Roberts to the trope-wrangling postmodernist that we have grown accustomed to.