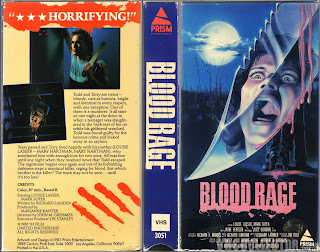 [Part of my series of Letterboxd reviews that's edited and expanded. The original review is here.]

Ostensibly a horror film about a slasher, Blood Rage (AKA Slasher AKA Nightmare at Shadow Woods) is actually a draining and horrifying film about crippling depression and motherhood.

Maddy, mother of twins, could be called overbearing. She dotes on Terry, the twin not institutionalized for murder, while she still finds time to visit Todd, her prodigal son. When a psychiatrist finally gets through Todd's catatonia, the suspicion is raised that Terry did the killing those ten years ago, not Todd. When faced with this damning information, Maddy finds herself in a spiral of guilt, shame, and obsessive-compulsive disorder. Instead of coping with this newly exhumed trauma, instead of seeking solace in psychotherapy, counselling, or even medication, Maddy seeks help from the bottle, from obsessive eating, from obsessive cleaning.

Blood Rage depicts a world frighteningly close to ours in the sense that this cinematic world stigmatizes mental health problems to an absurd degree. Whereas Todd (the accused but innocent) might be considered mentally incompetent and traumatized to the point of agoraphobia, the film's cast labels him as (and I quote) a "lunatic," a "wacko," the "crazy brother," and "insane." He's called crazy probably a dozen times by at least six characters. When faced with his twin's beautiful and bold girlfriend, he stumbles his words and confesses that he has never kissed a girl. What tone the film is going for in this scene is a mystery, as it's clearly heartbreaking. The reaction Todd is rewarded with for this honesty? She runs, she tells her friends about his social ineptitude, she mocks him.

Meanwhile, Maddy pours herself a giant glass of wine, sits on the floor and eats out of the fridge. She pushes the vacuum around the house, the ultimate modern motherhood manifestation of Sisyphus.

Maddy is obviously concerned that her damaged son has escaped from the hospital, but this does not deter Maddy's boyfriend, Brad, from pressuring her into making out, into sex. Despite being clearly not into it, she is told to relax. Here is a motif of the film and of Maddy's life: men pressuring her into sex. Her first husband tried to get her to get busy in the opening scene in the drive-in theatre and this is echoed when Brad seems annoyingly relaxed about a missing son.

She can't talk about the murder. When the hospital calls and informs her of her missing son, she begs Terry not to tell people. She explains that it's to keep up a happy pretense, but as the film goes on, we realize it's because Maddy refuses to face that she has invested in the "wrong" son. She is in denial.

While some slashers opt for a fun gory ending, sometimes with a twist, Blood Rage goes for straight up fucking nihilism. This is easily the most depressing misanthropic ending I've seen in a slasher. When Maddy seems poised to accept that one of her sons is actually a monster, she shoots him a bunch of times. In a cathartic moment, she grabs her surviving son and hugs him tightly. They sob together as she consoles him, letting him know that he is her entire life. Here, then, we have a woman that has subsumed her whole identity into the role of mother. She tells Todd that Todd is gone and that they can be together, mother and son. Todd jerks back. "I'm Todd," he says, and Maddy realizes her error. She has killed the "wrong" son—again. Her crime is repeated upon herself again, she believes. Todd, catastrophically hurt by this mistake, wails in pain and continually chants that he is in fact Todd; Maddy picks up the mantra, repeating that she is also Todd. She means that she is the wrong son, too. She picks up the mantra and picks up the gun, shooting herself in the head. Todd looks away from the wall where he had buried his head and the film ends on his horrified face in freezeframe, the true cost of these mental illnesses to never be reckoned.

Blood Rage is not a fun slasher in any regard. It is instead a harrowing journey into the common Western incapability of talking about mental illness, talking about post-partum depression, and talking about the heavy burden that society has placed upon women, to be mothers, to be women, to be sexual, to be chaste. Blood Rage is positively dripping with lecherous predators, both actual killers and those who would pressure people into sex. Even though Karen is clearly Terry's girlfriend and her own person, Gregg tries to console her by making out with her when she's scared. He feels completely entitled to touch and kiss this person without permission.

Women are often given short shrift in slasher films and this one is no exception. However, no other slasher I can think of from this era has ever depicted the sheer stigmatization of mental illness in such harrowing ways. One can only imagine how these characters could have healed (or at least tried to) if the apparatuses of mental health had been stronger or if access to these apparatuses hadn't been taboo.

Let's remind ourselves that one major thing that neoliberalism did was to push countless people struggling with debilitating mental illness out of the care of institutions and into the streets, increasing homelessness and stigmatizing access to care. The privatization of mental health clinics have stratified the access to these selfsame apparatuses; only the rich can afford private health care.

From the article "Beyond Prisons, Mental Health Clinics: When Austerity Closes Cages, Where Do the Services Go?" (here)


deinstitutionalization in mental health was in full swing by the 1970s, when Reagan became the Governor of California and decided to close down all the state hospitals. Hardly a champion of the oppressed, Reagan referred to institutions housing people with mental disabilities in California as “the biggest hotel chain in the state.”

Deinstitutionalization and neoliberalism's focus on the individual go hand-in-hand. The individual is asked by the State to take care of themselves, that they alone are responsible for their own health, including their own mental health.

Neoliberalism, as an ideology, rather than as economic policy, pushes focus away from the State and onto the individual. Personal accountability is stressed above all things. No longer will institutions protect us; we can only be individuals. We need to work on ourselves because nobody else will. We must strive for perfection, this ideology demands of us. Those that cannot attain perfection are left to their own devices.

A comorbid factor in the rise of neoliberalism, along with deinstitutionalization, is the rise of pharmaceutical therapy. Again, we see the economic as the primum movens of social change. While pharmacology takes big strides in the field of medicine, the pharmaceutical industry, already a behemoth, finds deregulation working in its favour, opting for increased lobbying and thus increased political capital. This pressure shifts society's focus from the (individualistic) 1970s mega-trend of psychotherapy onto more assembly-line style therapeutic actions. Medication is easier to dispense than paying for extended stays in hospitals or long periods of therapy with licensed practitioners. One pill cures all was the promise offered by neoliberalism. Gone was the for "the greatest benefit to mankind" model of mental health, replaced by the for-profit model.

Thus it should be no surprise, then, that Blood Rage depicts this dystopia in the making with endless prejudice against the mentally ill, the pathologizing of neurologically atypical such as poor Todd. Though the film casts a favourable light on the possibilities of therapy, showing the audience a psychologist with altruistic and ethical behaviour, Blood Rage still struggles to find light in the oppressive darkness that is mental illness.

While Todd suffers greatly, it is no doubt Maddy that suffers the most in this harrowing depiction of mental illness. Again, the pressures placed upon women in Western society outweigh by a firm degree those placed upon the opposite sex. Motherhood itself is politically fraught, with actual lives hanging in the balance in the fight for bodily autonomy. A cursory glance at any "mommy blog" or forum will reveal a ruthless battle. Consider the conflict over breastfeeding, again, an arena of intense signification and fever pitch fighting. A recent book, Lactivism, charts the skirmish on the frontlines. Breastfeeding takes on significance right up to the point of implosion, as it becomes a sigil for motherhood itself.

In her wide-ranging and endlessly compelling book, Pink Ribbons Inc, Samantha King argues persuasively that much of the attention paid to breast cancer, to the point of corporatization of charities, is due to the signification of breasts as signs of motherhood and femininity. Breast cancer garners more attention than other types of cancer, say ovarian, as breasts are visible (they are secondary sex characteristics, after all). There is little sign of motherhood more obvious than a mother breastfeeding her child. King wisely points to breast cancer's visibility as part of the apparatus of whiteness and cissexism. Heteronormativity must be preserved and to preserve it, we must preserve cis mothers with their obvious breasts. The sign is the arena of class struggle (Voloshinov), and here then, the fraught sign is motherhood.

There is more pressure put on Maddy to conform to neurotypical structures, heteronormative practices, rigid gender roles: her obsessive-compulsive behaviours manifest in stereotypically coded feminine pursuits such as vacuuming, cleaning, drinking wine, make-up, etc. Most importantly, her value in life appears to be her ability to procreate and then raise children. Her children's failure to be neurotypical reflects on her, society would have us believe. Her shame at "failing," her genetics' betrayal, demonstrates her to be a "poor mother," a terrible crime for any woman. The film doesn't punish her for this transgression. No, the film doesn't even need to punish her. She does it all on her own, internalizing the lessons wrought by patriarchy and neoliberalism. No other slasher I can think of has depicted women more sympathetically than Blood Rage. It's a heartbreaking depiction of the pressures hoisted upon mothers and their already strained mental health thanks to the rigours of patriarchal oppression.

Blood Rage has depicted this dystopian society while it was happening. Now we are living in the after-effects. What a prescient film.
Posted by matthew.