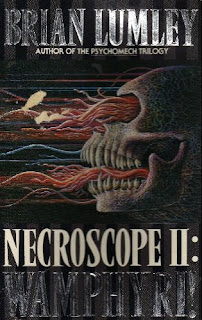 If the exclamation mark in the title didn't clue you on, the second Necroscope book doubles down on the comic book style pulp adventure by way of Lovecraft. My love for this book can be summed up with a scene near the end, when the little person villain (who's psychic) explains his evil plan to the sadistic KGB agent. They're in a castle in the mountains, where they've been electronically wiping the memories of a British Intelligence agent while telepaths jot down notes of what comes out of his brain. This is pure comic book pulp and it's terrific.

Necroscope II: Wamphyri! picks up plot strands left over from the first while retconning a bunch more. For those not familiar, retcon is a term from comic books in which a piece of new information is retroactively inserted into continuity. For example, Spider-Man learns that before her death, Gwen Stacy and Norman Osborn had a sexual relationship. This adds new wrinkles to already established stories. Lumley, in this second book, isn't shy about this. Despite killing off the major vampire in the first one, he writes that before his death, the vampire implanted a pregnant mother with some vampiric DNA (I guess) so when the baby was born, it would slowly turn into a vampire. So, there is another vampire menace to be defeated, but also the protagonist has the added problem of incorporeality. Harry's body was destroyed during the climax of the previous book, so now he must find a body or risk being obliterated by the growing strength of his unborn son, with whom he shares a body!


Writing this stuff out makes it seems more ludicrous than it's presented in the novel. Lumley's serious no-nonsense prose (which is hilariously terrible) pastes a patina of respectability over this, which works in a way, as this is classic pulp. Lumley finds the most ridiculous route, but drives as straight as possible. The narrator's voice tries to find a balance between a fairly wide-eyed one, one consistently reiterating the absolute impossibility of all of this and one that wants nothing of the sensationalism of the pulp era. The tension between the two poles does service the narrative, as much of the book is rooted in Cold War era espionage and historicist takes on vampire legends. A significant chunk of the narrative is an extended flashback in which the lead vampire of the previous book relates how he was turned into one at the hands of an even more powerful and terrifying vampire. Lumley situates this flashback in a deeply historical framework, almost to the point of citing his sources! He considers Vlad the Impaler, and then rejects him for a story closer to a historical truth (unhinged and bloodthirsty Crusaders that were eventually excommunicated) that eventually verges into folklore. Like all clever postmodern takes on folklore, Lumley finds realistic and plausible reasons for beliefs such as the vampire's distaste for running water. By putting these tropes of the vampires into more mundane circumstances, he manages to control and modulate the audience, lulling them until he can shock with some of lunacy he derives from the pulps.
Some might roll their eyes at yet another effort to situate vampires into the real world, such as explaining away their weakness to the sun as the genetic abnormality photophobia (which occurs naturally). There is a long history of this effort, some more successful than others. I remember being so angry reading Elizabeth Kostova's The Historian (a 2005 novel published in the wake of, and in the faux academic façade as The Da Vinci code) as it wasted countless pages on monks in Romania before dispatching the Count in the most anticlimactic fashion. Lumley's revisionist take manages to keep the historical interest without boring the audience thanks to a command of pacing (he always cuts away in a "meanwhile back at the ranch" style) and the batshit Lovecraft stuff that caps off the finale. Again, the novel succeeds thanks to the oscillation between narrator styles, the tension between the two, the narrator's seeming awareness that this shit is insane.
Like the first novel, this sequel treats its women poorly. Extremely poorly. The villain, Yulian, enthralls his nubile cousin, rapes her repeatedly, and keeps her in an almost drugged state with hypnosis. Yulian's mother is oppressed, literally, by a vampire son who hypnotizes her. I mean, really, the primum movens of the plot is rape by tentacle! And just like with the first novel, women are only described in two ways: fuckable or not. Zek, a female ESP agent for the USSR, is constantly described as beautiful, ravishing, fuckable. One of the villains trains his lecherous thoughts on her and we're treated to copious descriptions of what he'd do to her. Characters use the threat of sexual violence when intimidating any woman in the book. Harry's spouse Brenda is no longer fuckable because she's pregnant. While in the first book, Harry the sexgod (as all male protagonists of pulp are) fucks her silly all the time, in the second book, she loses all of her sexuality because a pregnant woman isn't sexy, I guess. At least the homophobia is toned down slightly.
The first Necroscope was published in 1986, set in 1977, while this second book was published in 1988, when glasnost and perestroika had come full swing. A newer, gentler USSR was born, despite the ticking clock counting down to 1991. Necroscope II reflects this newer USSR by (heretically) having more humanized Soviets... other than the cartoon villain that I mentioned at the beginning of the post. No, Necroscope II features British Intelligence agents and Soviets working together, collaborating to fight a greater evil. Lumley even manages to depict the USSR's bureaucracy and operations with a modicum of respect. As this series is so firmly rooted in the Cold War, it's worth tracking how the novels reveal the ideologies that underpin the conflict. What this says about the novels themselves is up for debate. Does the series help us understand the Cold War in a different light? Do the novels reflect an effort to recontextualize and rehabilitate the psychic trauma wrought by decades of paranoia by pushing the conflict into the realm of the physical and tangible? Do the novels forgive or legitimize the atrocities and errors committed by the various states by fantasizing an evil greater than the sum? Questions perhaps I'd be better equipped to answer once I've sunk further into Lumley's chaotic and violent world.
While perhaps not as fresh as the first novel, as Necroscope II replicates the structure of the first, I still quite liked it. I managed to zip through the novel at a good clip. Even if it feels ramshackle, as if Lumley wrote the whole thing in one night and never bothered to polish the prose, Necroscope II is a fun pulpy adventure.
Posted by matthew.